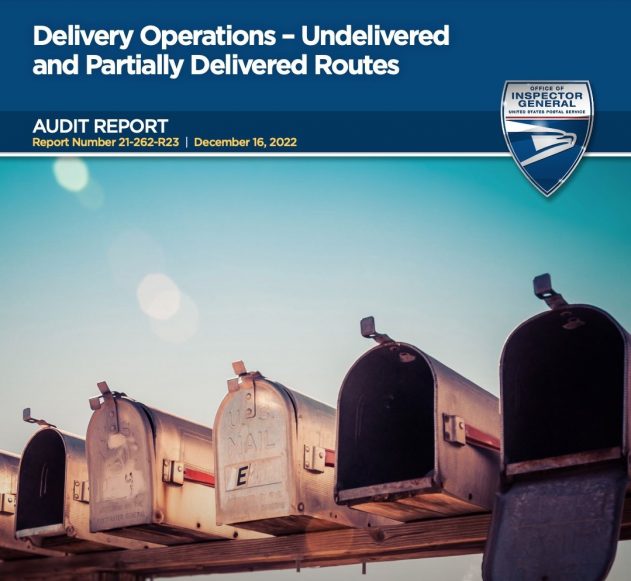 The #USPS OIG has just released an audit report on Delivery Operations – Undelivered and Partially Delivered Routes. This refers to instances where carriers were unable to deliver all the mail along their assigned route on the scheduled delivery day. The causes include unavailability of carriers, severe weather, traffic, accidents, blocked receptacles that prevent the carrier from servicing the route, and so on.

The Postal Service has various technical tools that identify mail that was delayed because of these problems. But the tools do not identify the number of undelivered and partially delivered routes nationally due to technology constraints and reliance on the manual recording of delayed mail by delivery unit management, which is often underreported. As a result, the actual number of undelivered and partially delivered routes is unknown.

In response to a draft of the report, USPS management disagreed with this second recommendation: “To notify customers of delayed mail, or undelivered/partially delivered routes, requires the development of a technological infrastructure far beyond existing Postal Service operational scope and purpose…. With the large volume of mail moving through their network each day, it is not feasible to trace a single piece of letter-sized mail.”

The OIG said that managements comments were “non-responsive” to the recommendation, and it “will pursue through the resolution process….  Recommendations should not be closed in the Postal Service’s follow-up tracking system until the OIG provides written confirmation that the recommendations can be closed.”