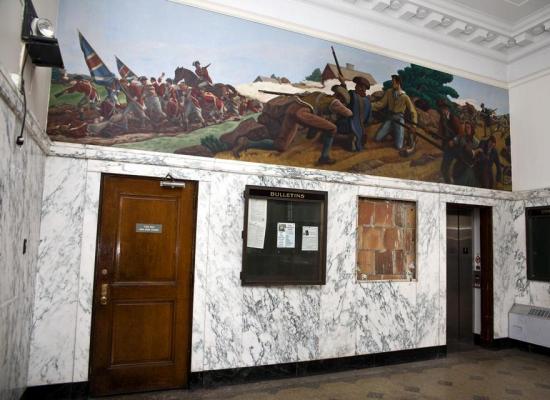 The Boston Globe has a great op-ed piece about the legacy of the New Deal and the loss of the Union Square post office: “Today, the Union Square post office and Moffett’s patriotic mural have been sold, as the US Postal Service embarks on a liquidation program to reduce its $20 billion deficit. The building was purchased for $2.75 million by the music impresario Don Law, who is expected to develop it into an arts or entertainment venue, and who promises to preserve the painting. Still, it’s unclear what kind of access the public will have to the property.

“Robert Reich, the former US labor secretary who sits on the board of The Living New Deal, has written that “we need a new WPA to rebuild the nation’s crumbling infrastructure and put jobless Americans back to work.” True enough. But we also need it to restore a sense of shared pride in a demeaned public sector that is, after all, a reflection of us. Deferred maintenance doesn’t just damage bridges and highways. It chips away at democracy, too.”  Read more.