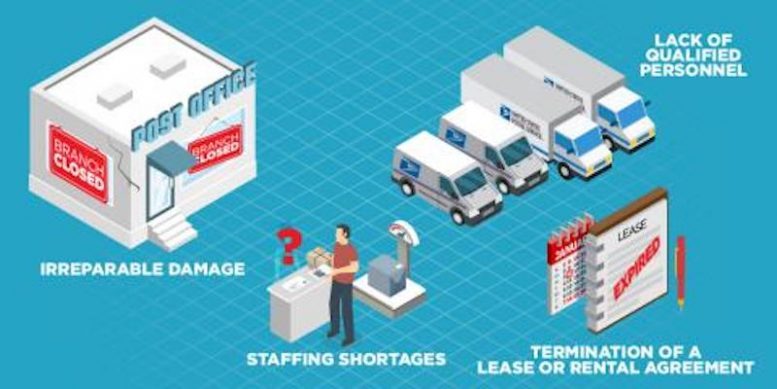 Suspensions are intended to be a temporary situation.  The Postal Service is supposed to fix the problem that led to the suspension or initiate and complete a discontinuance procedure before closing a post office permanently.  In many cases, however, the Postal Service has done neither, and hundreds of post offices have ended up in the limbo of suspension.

As of September 30, 2016 (the start of FY 2017), the backlog list contained 662 suspended post offices.  During FY 2017, the Postal Service officially discontinued about 300 of these offices and reopened 39 of them, leaving 319 still in suspension status at the end of the year.

The discontinuance process on these 300 offices had actually been completed a few years previously, all except for the final step, announcing the discontinuance in Postal Bulletin.  The Postal Service held back on the announcements because it was concerned that “clearing the backlog of suspensions could have complicated efforts at the federal level to secure necessary consensus on ongoing legislative reforms under consideration.”

During the first three quarters of FY 2018, final notifications of discontinuance were published in Postal Bulletin for 52 more offices.  Fourteen were reopened.  There are currently 253 still under suspension.

While most of the discontinuances announced in Postal Bulletin during FY 2017 had already gone through a complete process (except for the Postal Bulletin listing), the discontinuances in FY 2018 had not reached that stage.  In most cases, as shown on this list of the most recent PB announcements (June 2018), there had been a public meeting — held sometime in 2011 to 2014 — but as of the end of FY 2016, no final determination had been issued.

It’s not clear in what manner the Postal Service completed the discontinuance procedures on the post offices suspended several years previously, and many questions arise.

For example, in the case of the Quaker Street, New York, post office (12141), a community meeting was held in December 2008, the post office was suspended over a lease issue in March 2009, and the discontinuance proposal was posted in November 2013.  How could a meeting in 2008 have been about a discontinuance that would not even be proposed for another five years?  The meeting had to be about the possibility of a suspension.  Was a second meeting — the meeting required by the discontinuance procedure — ever held?

With all of these discontinuances, no administrative record has been made available, since no appeals were ever filed with the PRC.  So there’s no way to know if other key steps in the process ever took place.  Once a proposal to discontinue had been made, were customers invited to submit written comments?  After a final determination to discontinue had been made, were notices sent to customers and posted at nearby post offices?  Did customers of the discontinued office know they had a right to appeal the decision to the PRC?

None of these questions are addressed in the Postal Service’s suspension update notice, and it’s not likely that the Commission will ask them.  As indicated by the comments about suspensions in the PRC’s 2017 Annual Compliance Determination Report, the Commission seems more concerned that the Postal Service continue to make progress  clearing up the backlog.  As the ACDR states, “The Commission reiterates the importance of resolving the remaining suspended post offices as soon as possible.”  Not a word, though, about how the process is being conducted.

In April 2018, the USPS OIG initiated an audit investigation into problems associated with suspensions.  The report was supposed to address such questions as: