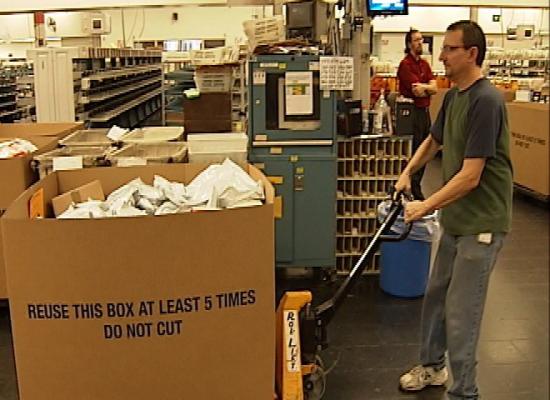 The USPS Office of Inspector General has just issued a management alert about the timeliness of mail processing after the changes in service standards went into effect on January 5, 2015.

The OIG says that the changes were expected to affect about 14 billion pieces of total mail volume, and up to 16 percent of First-Class Mail.  As discussed in this previous post, the amount of mail that is being impacted by the change in standards may be far greater than that.

The OIG shows that since the first of the year, the Postal Service has not been meeting even the more relaxed standards.  The problems are so significant that further changes in operations and consolidations should be put on hold until service performance stabilizes at a satisfactory level.

The OIG’s recommendation is essentially the same as the view expressed by PRC Commissioner Ruth Goldway back on January 13, 2015 — a week after the service standards were changed — in an op-ed piece for The Hill.

“At a time when the Postal Service is proudly promoting its Sunday delivery and same day package delivery offerings in major cities,” wrote Goldway, “it should not be impairing service in other parts of the country.  The Nation depends on a Postal Service that provides as consistent a level of service and pricing as possible to all Americans.”

“Before proceeding with these changes,” continued Goldway, “the Postal Service should – at the very least – offer well-supported projections of the impacts on operational efficiency and solid estimates of financial savings before hastily embarking on this new round of cuts and closures.”

The Postal Service proceeded with the changes anyway, and, as anticipated, delays have occurred across the country.

The fact that service performance has been declining has already been well documented, as discussed in this previous post on this website and in other news articles (like this piece by Lisa Rein for the Washington Post).

But the OIG’s new report should make the point more forcefully, and the Postal Service may find it difficult to proceed with the consolidations until performance improves.

As the OIG writes about the past few months, “Mail was not being processed timely throughout the country.  We found in the first 6 months of 2015 delayed processing increased by about 494 million mailpieces (a 48 percent increase), as compared to the same period last year (SPLY).”

To illustrate the extent of the delays, the OIG provides the following chart.  The blue bars show how much mail was delayed this year, while the red bars show the delays during the same period last year (SPLY).  (Click on the chart for a larger view.)

The OIG goes on to note the two main explanations for the delays: bad weather and the changes in operations that took place in January when the new service standards were implemented.

The OIG proceeds to break down the situation for two-day mail and for 3-5 day mail.  In both cases, performance has declined significantly.

The OIG found the External First-Class Measurement (EXFC) scores declined by as much as 6.71 percent for 2-day service right after the service standard revisions as compared to the SPLY.

Scores were much worse for 3-5 day mail.  They declined by as much as 38.60 percent for 3-day service as compared to the SPLY.

These declines are illustrated in the following charts.  (Click for larger view.)

It should be noted that service performance has been improving over the past quarter.  But as the OIG observes, “service is not where it was during the SPLY, as the network still needs to stabilize.”

As a result of its findings, the OIG has recommended to the Postal Service that it mitigate the delays and assign appropriate staffing to ensure timely delivery of the mail.

Most significantly, the OIG also recommends that the Postal Service “establish criteria for determining if the network has stabilized and ensure the criteria are met prior to resuming the Phase II consolidations or conducting any other optimization efforts.”

The Postal Service responded to a draft of the OIG’s report and said that management did not agree that the consolidation activities should be put on hold.

In response, the OIG said that it nonetheless “continues to believe that no further significant national network or operational changes should take place prior to establishing criteria and stabilizing the network.