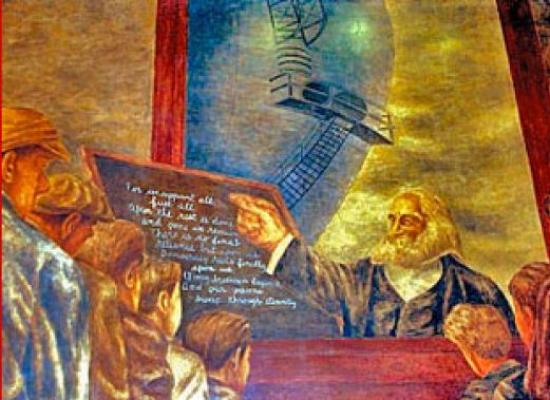 Among the speakers at the meeting will be Jacquelyn McCormick of the National Post Office Collaborate; historian Gray Brechin of Berkeley; Congressman Jose E. Serrano; Jonathan Smith, President New York Metro Area Postal Union, APWU; and Julio Pabon, a community activist who has filed appeals to stop the sale of the Bronx GPO.

The organizers of the event also invited former postmaster Mark Jamison, a regular contributor to Save the Post Office, to speak at the meeting.  Mark wasn’t able to make the trip from Webster, North Carolina, to the Bronx, but he sends these words, which he would have liked to share at the meeting.

I am sorry that I cannot be with you today to help in your efforts to save the Bronx General Post Office.  It was an honor to be invited to speak to you today, although I did wonder for a moment what a fellow from the mountains of North Carolina could possibly say to folks in the Bronx.  It would seem that the two places are very different.

Then I got to thinking about what we might have in common.  I was aided in that effort by reflecting upon the two Walt Whitman poems that are so much a part of this building.

When Ben Shahn and Bernarda Bryson came to paint their murals on the walls of the Bronx GPO, they were inspired by Whitman’s I Hear America Singing.  In the poem Whitman describes how he hears the songs being sung by the working men and women of America.  He hears the song of the carpenter, the mason, the boatmen, the woodcutter, and the ploughboy.  He hears too the song of the wife and the mother.  He hears these folks “Singing with open mouths their strong melodious songs,” and they bring him to life.

The final stanza from Whitman’s As I Walk These Broad, Majestic Days is inscribed in one of the murals by Shahn and Bryson:

For we support all, fuse all,
After the rest is done and gone we remain;
There is no final reliance but upon us;
Democracy rests finally upon us, (I, my brethren begin it)
And our visions sweep through eternity.

“Our visions,” writes Whitman.  Can you picture the place you live tomorrow, a year from now, five years from now?  If the memory of your community goes back twenty years or a lifetime or even is shared with generations of the past, how does that memory fit with your picture of the future?

Change is inevitable; progress is not.  We often discard things in the name of progress, but are the memories of those things, memories that will soon have no context in the current landscape, sufficient as only memories?  Was there something beyond memories worth saving?  Is what we are losing, what we have lost, worth what we supposedly gain?

Is this just a building in the middle of a city, an edifice that has outgrown its usefulness and value?  Or does it represent something more?

The murals on the wall of this building depict Americans at work.  Mr. Shahn said he painted these scenes so that the people of New York could see, in the work of other Americans, a connection to their brethren across the country.  I see in that message, in that connection, something very much worth remembering — even more, something worth preserving.

We are told this building no longer serves its purpose as a post office, that progress must prevail, that things must be shaped for current circumstances, downsized and “rightsized” to help make the Postal Service profitable.

It is fitting, though, that these murals and the message they send should be in a post office.  The Founders understood the importance of a national post.  They understood that connection must be an inherent part of the foundations of Democracy.

“Binding the nation together” are not empty words.  They are a call to connection, a call to community, a call to understand that there are things we can do together that we could never do alone.  Yes, America has a tradition of rugged individualism, but it maintains that tradition in the context of connection and community.  E Pluribus Unum – from many one.  Binding the nation together cannot and should not be empty rhetoric.

Can you picture America and particularly your community a year from now, five years from now?  Do the things you hold dear still have a place in the picture?  Is there room for your community, your neighbor, your children?

In our quest for rightsizing, for maximizing profits and shareholder value, will we have outgrown the need to keep a place for the things we hold dear?  Are we able to acknowledge that there are things more dear than profit?

They want to close this venerable old post office because it supposedly no longer serves an important purpose.  This story is being repeated all over the United States as we close post offices in communities large and small.  And it is not just buildings that are seen as no longer serving a purpose.

We are also told that the workingmen and women who move the mails no longer serve a purpose.  There are too many of them, we’re told, and another hundred thousand jobs must go, on top of three hundred thousand lost over the past fifteen years.

This attack on workers isn’t just happening to our post offices.  All over this nation working men and women are being discarded because a small number of people at the top of the economic ladder have decided working folks no longer serve a purpose — and if they do, they should serve that purpose more cheaply.

Change is inevitable, that we must accept, but need we accept the idea that the things we value, including people and ideals, must be cast aside in the name of progress?  Must we accept being the victims of change?  Must we feel that we have no control over it?

We send a resounding NO to the idea that we should allow our connections to be broken so blithely.  Heaven forbid that we should change so much as to become unrecognizable to the generations past who formed our memories and built our connections, who recognized the ties that must bind us together.  If we allow the sorts of changes that are proposed, if we permit the desecration of our basic ideals, then we are in danger of becoming unrecognizable even to ourselves.

The efforts to harm working folks all over this country, to close post offices, to discard treasures like the Bronx GPO, and to break the ties that bind us together — these efforts hardly speak of an America that can be proud of the people who inhabit it.

Democracy rests upon us.  You my brethren begin it.