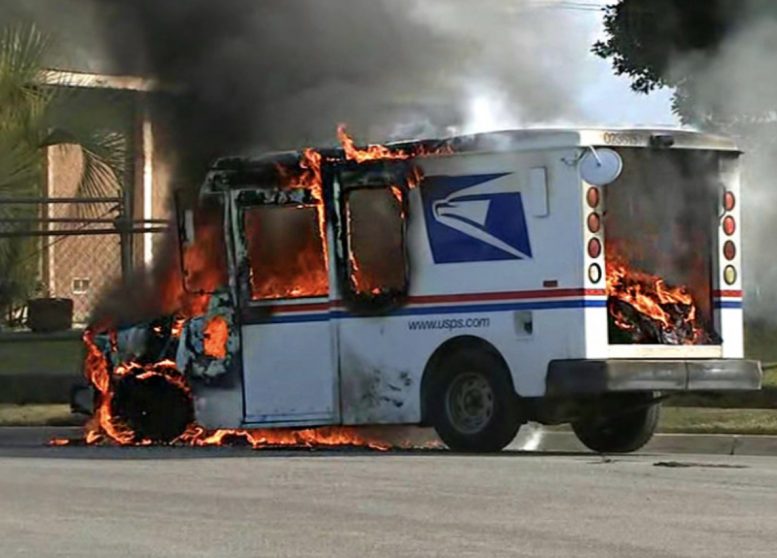 By Philip Rubio, professor of history at North Carolina A&T State University and author of Undelivered: From the Great Postal Strike of 1970 to the Manufactured Crisis of the U.S. Postal Service

The Baffler: WHEN I FIRST HEARD BOB DYLAN sing “Stuck Inside of Mobile with the Memphis Blues Again” in 1966, I was struck by the fantastic yet funny image of a young man unable to mail a letter because “the post office has been stolen / and the mailbox is locked.” Now those words seem dismally prescient. As reports pour in of imminent austerity measures and widespread delays with less than one hundred days until a presidential election that may be conducted largely by mail, the outlook for the chronically besieged U.S. Postal Service seems grim. But as with every crisis, this one has its own long history. Conflicts don’t inevitably end with powerful forces successfully denying rights and services to the people. In fact, that’s usually where conflict starts.

Let’s begin with the present. On June 15, 2020, a new postmaster general took office: Louis DeJoy, a major donor to the Republican Party and President Donald Trump. DeJoy, who has helmed corporations with USPS contracts, made news a month later when leaked, unsigned USPS internal documents (verified by the American Postal Workers Union) announced the agency would pursue profitability by cutting service and eliminating overtime—even if it meant delaying mail. Otherwise, according to the documents, the USPS would be “gone” like U.S. Steel (in fact, today’s second-largest domestic steel producer). The USPS on July 22 denied the documents were “official,” but acknowledged that they originated with regional leadership. A July 28 DeJoy statement on “operational excellence and financial stability” blamed a “broken business model” for the USPS crisis; he declined to mention the pandemic or its crippling debt. Complaints meanwhile have quickly emerged from around the country of households not getting their mail for days or even weeks at a time. Alarm over a potential mail-in ballot disaster in November prompted the House Oversight and Reform Committee to call DeJoy to testify next month.

The USPS July documents and curtailments were preceded in April by another of Trump’s verbal attacks on the USPS—then headed by Megan Brennan—as “mismanaged” and “a joke.” After Secretary Treasurer Steven Mnuchin rejected a bipartisan Senate proposal to bail out the Postal Service, Trump threatened to refuse approving a $10 billion USPS loan in the 2020 CARES Act to help offset revenue losses due to the Covid-19 pandemic, unless the USPS met administration demands for labor contract changes, a quadrupling of parcel rates, and executive branch intervention in senior management appointments. Analysts judged those demands as counter-productive, unreasonable, and undermining federal statutes. (The loan was eventually approved on July 29 without labor contract changes or parcel rate increases, and Postmaster General DeJoy’s appointment rendered the appointment condition moot—but the loan agreement did obligate the USPS to provide proprietary information about their largest private-sector contracts to the Treasury Department in addition to regular financial and volume reports.)

“Postal Crisis 2020” could become a remake of the 1940 film noirclassic Gaslight when you consider the evidence. The USPS carries a multi-billion-dollar debt to the U.S. Treasury because of a 2006 law initiated by President George W. Bush that attempted to remedy a huge USPS pension overpayment discovered in 2002 which threatened to unbalance the unified federal budget. Besides limiting what products the USPS can sell and capping rates for “market-dominant” products like first-class and priority mail, the 2006 Postal Accountability and Enhancement Act (PAEA) also required a $5.5 billion annual payment for ten years to a new Retiree Health Benefits Fund (RHBF) in place of “pay-as-you-go” typical for government agencies. But the USPS overall has performed well financially since at least 1995, and in FY 2006 it earned almost half a billion in surplus revenue. For most years since then, its operations have earned a surplus—except for the debt, which induced a crisis in 2009, the year after the Great Recession caused a massive volume loss as businesses cut back on mailings.  Read more.