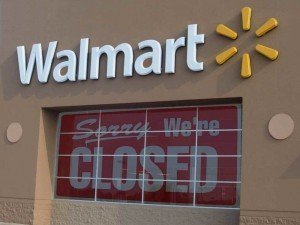 Whenever the Postal Service wants to close a post office, it tells affected customers about all the “alternative access” points in the area where they will continue to be able to do some postal business — like buying stamp booklets at Walmart.  The Postal Service usually includes a list and map of all these alternatives in the discontinuance notice (as they appear on the USPS Find Locations page).

Now that Walmart has announced that it is closing 154 stores in the U.S., it seems only fair to point out that there’s always a post office nearby where one can not only buy stamps but do all sorts of other business, like sending packages and Priority mail, getting a passport, renting a post office box, and so on.

Here’s a map showing the locations, with the Walmarts in red and the post offices in blue.  If you zoom in on a location, you’ll find that the post office is often just a short distance from the Walmart.  (Go here for a larger version.)

The Postal Service is always touting its “alternative access” channels where one can do postal business and thereby avoid going to the post office.  A few years ago, the Postal Service ran an ad campaign called “USPS Everywhere.”  The press release starts like this:

With nearly 100,000 places to buy stamps, ship a package or renew a passport, the U.S. Postal Service is expanding customer access to its products and services. It’s not about brick-and-mortar Post Offices anymore, as postal products move online and into retail outlets, grocery stores, office supply chains and pharmacies.

That’s a little misleading, since more than 60,000 of the 100,000 places just sell stamps on consignment as part of the Stamps to Go program, and another 32,000 are actually USPS-operated post offices.  But the point is clear enough: you don’t need to go to the post office.

The Postal Service makes the same point in a more recent ad campaign promoting USPS.com as “the world’s largest post office.”  It starts this way:

“Customers are always at the front of the line at this Post Office that never closes. With a click of the mouse customers can conveniently ship from their homes to any location by scheduling a next-day package pickup — saving a trip to the Post Office.”

The Postal Service encourages people not to use the post office because that’s the most expensive way to bring in retail revenues.  It’s much cheaper to have Walmart sell stamps on consignment or to have an approved shipper like Staples deal with parcels.

But one of the problems with citing alternative access points when the Postal Service wants to close post offices is that private retailers can be closed at a moment’s notice, like the 154 Walmarts closing soon or the 225 Staples stores that closed last year.  There’s no guarantee that a particular alternative will be there tomorrow.

Along these lines, it’s also worth noting that the Postal Regulatory Commission is currently inviting comments on a Public Inquiry docket about post office closings and appeals.

One of the issues being addressed is how the statute governing post office closings —39 USC 404(d) — may need a new interpretation due to the fact that that there are more places to buy stamps and send packages than there were when the statute was enacted in the early 1970s.

The PRC is apparently moving toward narrowing its jurisdiction over appeals, which will make it easier to close post offices without a full-fledged discontinuance study and all the transparency and community input such a study provides.  It will also mean that fewer communities will even be able to appeal a closing to the PRC.