The downtown post office in Cheraw, South Carolina, was built in 1933 under the New Deal.  It's located in the middle of the Cheraw Historic District listed on the National Register of Historic Places, and it's surrounded by buildings that go back to the Civil War and even earlier.  Cheraw, by the way, is the birthplace of Dizzie Gillespie. 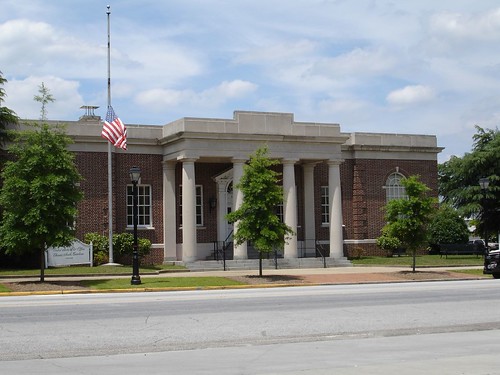 The post office almost closed back in 1996 and again in 2009, but preservationists and government officials were able to save it.  Now this historic post office is set to close again, and this time it looks like it's going to be tough to save.  Postal Service officials want to consolidate operations by moving postal services to an annex located  three miles from downtown.

Cheraw's mayor, Scott Hunter, said the post office would not go down without a fight, and he's enlisted the support of U.S. Congressman Mick Mulvaney.  But residents of the small town can see the writing on the wall.  As the Cheraw Chronicle reports, there are already rumors going around that potential buyers are making inquiries, and preservationists are hoping that the building might be turned into a museum or something that preserves the historic integrity of the building.

UPDATE, JUNE 8, 2011: "Residents riled up over closure of Post Office"