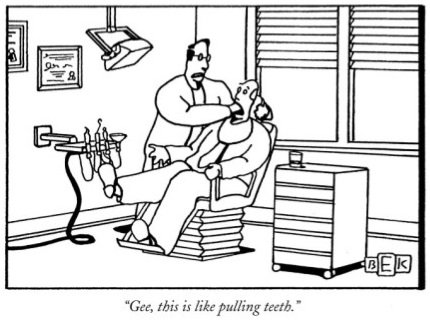 Getting closing lists out of the Postal Service is like, well, pulling teeth.  Over the past several months, hundreds of post offices have closed, gone into emergency suspension, or received a Final Determination notice indicating they’ll close in 60 days.  But try to find a list of all of these post offices on the USPS website.  One gets the impression that the Postal Service would prefer that the public not have access to this data.

It’s not as if the information is really secret.  Every community that sees its post office close or that gets a Final Determination knows about it, and there’s usually at least one local news article when a post office closes.  But in a very real sense, most closures take place below radar, and it’s difficult to see what’s happening at a national level.  In the UK, where they’ve closed over 7,000 post offices, something similar has gone on.  They call it “the secret closure programme.”

To make things more transparent, Save the Post Office has been tracking the closings, but it’s been difficult.  The Postal Service turned down a request made under the Freedom of Information Act for materials about the closings.  (Actually, it didn’t turn down the request outright – it just said that the information would cost $650, plus photocopying.)  Compiling data from a variety of sources like news reports is time consuming and prone to error.  The USPS website itself has incorrect information, and important pages are not updated often enough.

Yesterday, we had some good news in the list department.  In response to a request from the Chairman of the Postal Regulatory Commission (PRC), the Postal Service submitted several lists containing information about post office closings and suspensions.  Chairman Ruth Goldway made the information request (see #28) a couple of weeks ago as part of the information gathering required for the PRC’s annual compliance report.

The lists can be accessed in an Excel document (with five sheets) on the PRC website here, and there’s a description of the lists he re.  The lists are readily available on the Save the Post Office website as well (links below).  (Note that the new lists have several errors and anomalies, some of which have already been identified by Going Postal.)

Goldway has requested seven lists.  Five were submitted yesterday, and two more are forthcoming.  Below are links to each list, along with a few comments (not provided by the Postal Service):

That’s considerably more than the 280 USPS VP Dean Granholm indicated had closed as of October 13, and somewhat shy of the 500 that Postmaster General Donahoe said had closed as of mid-November.  It’s also many more than Save the Post Office was able to identify as of just a few weeks ago, when we published a list of 320.

The list does not indicate the reason for the suspension, but it certainly illustrates how suspensions can go on forever, which amounts to a de facto discontinuance, without due process.  Most of these post offices were suspended during 2008 to 2010.  In March of 2011, the Postal Service gave the PRC a much longer list of about 330 post offices that remained under suspension.  Many of those have apparently re-opened or closed permanently after a formal discontinuance process.  Chairman Goldway mentioned at a meeting of the PRC in January that about 200 suspended offices had closed or were being studied for closure. 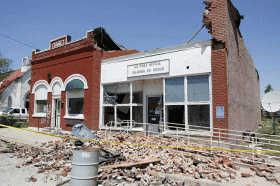 Like list (b), it does not indicate the reason for suspension, nor does it say what the current status of these post offices are.  A search of news articles about these suspensions suggests that many, if not most, were due to weather-related problems, like Hurricane Irene, the flooding in the Midwest, tornados, and so on, and most of them eventually re-opened.  In some cases, however, the Postal Service chose not to find a new location, and essentially used the natural catastrophe as an opportunity to suspend and subsequently close the post office.  The post office in Reading, Kansas, for example, was destroyed by a tornado in May, and three months later, the town learned the Postal Service was studying the post office for permanent closure.

The other main reasons for suspension that appear rather frequently in the news articles are (1) lease disputes (a topic discussed in this blog post a few days ago) and (2) a postmaster vacancy.  The latter occurs when a postmaster or officer-in-charge resigns or retires, and the Postal Service says it cannot find a replacement.  Such was the case with the suspensions in Marienthal, Kansas; Coats, Kansas; Keene, North Dakota; Palermo, North Dakota; and Manning, North Dakota.

This list represents a slight increase from the previous list of 307 that the Postal Service gave Evan Kalish of Going Postal under a FOIA request back in December.  The Postal Service has not provided any explanations for why post offices are removed from closure study, perhaps because it does not want other communities saying they meet similar criteria and should therefore have their post office removed from the closing list.

The Association of United States Postal Lessors (AUSPL) offers some possible reasons for post offices being removed from the study list.  In its latest newsletter, the AUSPL says that four post offices in Colorado – Maybell, Jaroso, Rico and Gateway – were removed because the nearest post offices are up to 60 miles away.  In New Jersey, the Carlstadt post office was removed apparently because it’s named for two fallen hometown Iraqi veterans.   In Alaska, 25 post offices were removed “as a result of Alaska Senator Mark Begich’s meeting with PMG Patrick Donahoe.”   And four rural post offices in Maine – West Forks, Stoneham, Topsfield and Matinicus – were removed “because customers would lose ‘regular and effective’ service.”

e. Post Offices projected to be closed in January 2012, including the projected date of closure, but for the recently announced moratorium on closures.

This refers to an earlier initiative to close lots of post offices — actually “stations” and “branches” rather than main post offices — that the Postal Service got started on in 2009.  That closing list initially consisted of 3,200 stations and branches, but during the Advisory Opinion process, it dwindled to just 162.  It’s not clear if the Postal Service will provide a list of those that closed from the original big list or the final short list.  (There’s more on the saga of the SBOC lists here.)

[UPDATE: On Feb. 8, 2012, the Postal Services responded to this interrogatory by providing a list with one post office on it, the Airport Station in Carolina, PR.]

The overall picture is something like this: About 430 post offices closed in 2011, and another 270 will close when the moratorium ends, for a total of about 700.  About one hundred of those were already closed under emergency suspension when the year began.  An additional hundred or so that closed for emergency suspension during 2008 – 2010 are now being studied for final discontinuance, which would bring the total to 800.

Overall, then, figure 600 closings and 200 emergency suspensions made permanent (which is basically what Chairman Goldway said at a PRC meeting in early January).  There’s a composite list based on the new lists provided this week by the Postal Service, as well as many other sources, such as Postal Bulletin and news reports, here.

At a meeting last month, Chairman Goldway said the PRC was expecting “mass closures” in May and preparing for all the appeals that this would generate.  At a meeting last week, she said, “We may well be faced with a flood of appeals if the Postal Service simply puts a notice of discontinuance on several hundred or several thousand post offices that it’s been holding off on for the last two or three months” (webcast at 25:20).

At this point, about the only thing standing between the country and the deluge is Congress.  We’ll see how that works out.