The big news of the week was the Advisory Opinion issued by the Postal Regulatory Commission (PRC) on the Retail Access Optimization Initiative (RAOI), the Postal Service's plan to close 3,652 post offices.  The PRC concluded that the Optimization Initiative, “notwithstanding its name, . . . is not designed to optimize the retail network,” so the Postal Service should come up with a better approach if it wants to close post offices.  The decision will probably put a damper in the Postal Service’s plans, but it’s just an opinion and the Postal Service is not obligated to accept the PRC’s recommendations.  The Advisory Opinion requires a blog post of its own, so more on that tomorrow.  Here’s a summary of other news of this holiday week. 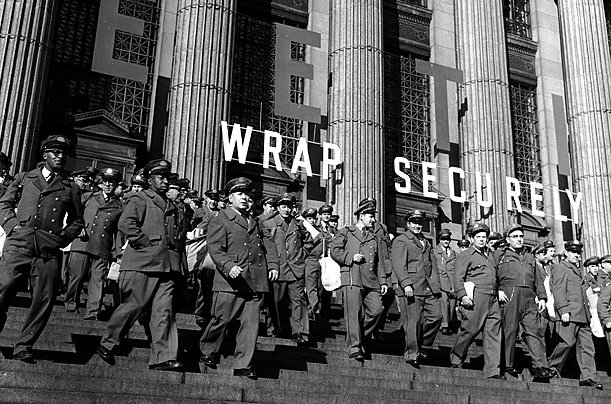 Five of the participants have already submitted their first “interrogatories” (questions and requests for information), and the Postal Service has replied to three of them.  The Greeting Card Association asked a couple of pointed interrogatories.  One was about the timing of the Request for an Advisory Opinion: “Did the Postal Service, in deciding on the timing of this filing, consider the possibility that the filing, plus any related media coverage, could adversely affect the willingness of customers to use the mails for purposes and at levels commonly found in the end-of-year holiday season?”  The Postal Service replied that it is “aware that ‘bad news' about its financial circumstances could cause some mailers to be less willing to use it products and services,” but the holiday season had nothing to do with the timing of the Request.  What was the Greeting Card Association implying?  That the Postal Service wanted to drive down mail volumes to make its dire condition look even worse, thereby helping to justify the consolidation plan?

The Greeting Card Association also noted that the volume of First-Class mail (FCM) for 2008-2010 averaged almost exactly what it averaged 1998-1990 (about 85 billion pieces).  Why, then, asked the GCA, does the Postal Service believe “it must eliminate the overnight delivery standard to deliver the same FCM volume that it could deliver overnight not many years ago?”  The Postal Service answered, basically, that the comparison was irrelevant.

More remands and dissents: Dealing with two Advisory Opinions didn’t stop the PRC from issuing decisions on appeals on post office closings.  The PRC remanded the decision to close the post office in Etna, New York, the focus of a "Save the Post Office" post back in July.  That's a great Christmas present for the folks in Etna.

The decision to close the post office in Watson, Alabama, was also remanded back to the Postal Service for further consideration because the Commissioners found several flaws in the Postal Service’s case and in its discontinuance process.  The kicker was that the Postal Service had already arranged to set up a contract postal unit in a nearby community “with the intent of having it absorb all of the services now provided by the Watson post office and did so before the deadline for receiving questionnaire responses to the proposal to close, the input of the community meeting, and the posting of the Proposal and the Revised Proposal.”  In other words, the decision to close the Watson post office was a “done deal” before the community had an opportunity to express its concerns. 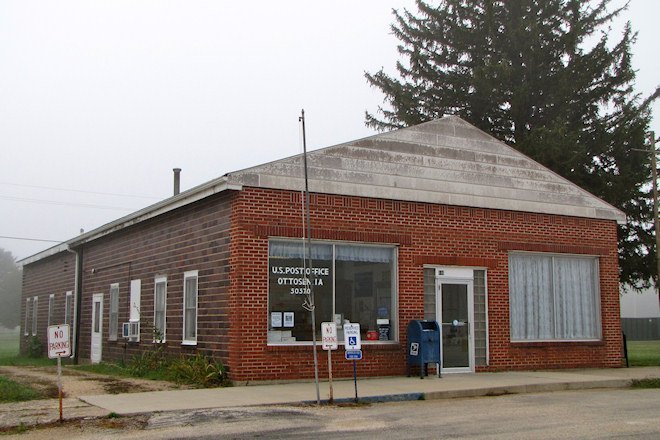 The PRC affirmed the decision to close the post offices in Velpen, Indiana and Ottosen, Iowa, but Chairman Ruth Goldway dissented on both cases, noting, “It is confusing and perhaps unfair to require some citizens whose post offices have received a discontinuance notice as of December 12, 2011 to gather evidence and pursue an appeal to the Commission, while others whose post offices were in the review process but had not yet received a discontinuance notice by December 12, 2011 have the respite of a five month moratorium.”  The Chairman may be using that passage quite frequently — there are something like 180 appeal dockets still open before the PRC. 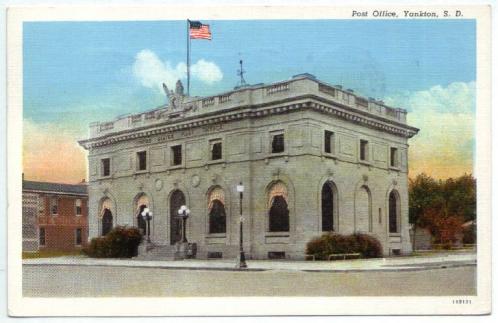 More closings, moratorium or not: The Yankton Daily Press & Dakotan reports that the historic post office in Yankton, South Dakota, will close on Monday, January 23.  Given that there’s a moratorium on closings until May 15, it’s not quite clear how that could be happening.  The Postal Service has told the PRC that it would “take the final step of closing a Post Office prior to May 16, 2012, only when that Post Office was not in operation on, and the Final Determination was posted as of, December 12, 2011.”  Since the Yankton post office is still in operation, shouldn’t it be included in the moratorium?

The Yankton post office was built in 1905 on the site of the town’s first school, which dates back to 1866.  Designed in the Classical Revival style, the post office is one of twenty landmark structures in downtown Yankton.  The nomination form to the National Register of Historic Places notes that while many government buildings adopted this palace style, “not all were designed as successfully as the Yankton post office,” and the application also calls attention to the “animated carved eagle over the center bay.”

The consolidation is expected to save the Postal Service about a $100,000 a year.  The building is already for sale, and according to the Postal Service’s new real estate website, the asking price is $395,000.

[UPDATE:  Nathan Johnson, the reporter following the story for the Daily Press & Dakotan, has contacted the Postal Service and learned that the post office will close despite the moratorium because it's considered a "relocation" and not a closing.  The New Deal post office in Venice, California, is closing as a "relocation" as well, but that case is before the PRC as an appeal right now.  The New Deal post office in Westport, Connecticut, also closed as a relocation.  These non-closings don't require a formal discontinuance process either.] 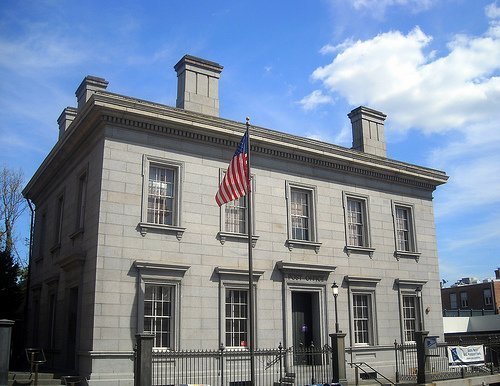 That's progress? The post office in Georgetown, the swanky historic neighborhood in Washington, D.C., is not being studied for closure, but the building is being sold anyway.  The Washington Post reports that the building, which dates back to 1858, when it was a Post Office and Custom House, is being sold to EastBanc, “a high-end housing and retail developer known for Cady’s Ally, the Ritz-Carlton and many other projects in Georgetown and the West End.”  According to the Georgetown Metropolitan, EastBanc started with an “ambitious plan to construct a dozen or so townhouses with a bunch of condos,” but that was scaled down to an office project, then scaled down further to a smaller residential project. “Finally it was determined that the part of the building that EastBanc planned to demolish was actually historical, so the project got even more scaled back and returned to an office project.”

That plan was approved, and now, “barring delays over the disposition of the property from the USPS to EastBanc, it should see significant progress (if not complete progress) in 2012.”  Maybe somewhere along the line the Postal Service will actually initiate a discontinuance process, invite public comments, give those comments “serious” consideration, and then decide to close the Georgetown post office.

Imprisoned by wistfulness: While we’re in the D.C. neighborhood, another historic post office has been sold, this one the New Deal post office in Bethesda, Maryland.  The Washington Post says that Donohoe Real Estate bought the Bethesda post office earlier this year; the developer says it will take three or four years to begin work on the site.  The Bethesda post office, in case you missed it, was the scene of a Christmas piece in the Washington Post last week, by Monica Hesse.  Monica describes customers waiting in line at the Bethesda post office, but doesn’t mention the building had been sold or that it’s a beautiful example of New Deal architecture.  Still, it’s an interesting article, well worth reading for the way it describes how the Postal Service’s desire to “move away from the idea of post offices as brick-and-mortar buildings” is being frustrated because “the post office is forever imprisoned by its own wistful reputation.” 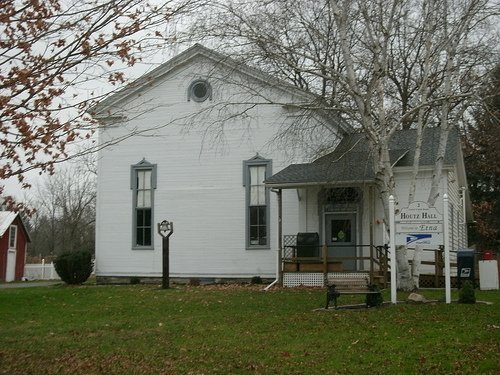 Protecting rural post offices: It won’t help urban post offices like those in Yankton, Georgetown, and Bethesda, but a new bill introduced in Congress would protect rural post offices.  Alabama Congressman Robert Aderholt has introduced the “Rural Postal Service Preservation Act” (H.R. 3744).  The bill would ensure that no more than 10% of the post offices closed over the next five years would be rural.  Given that 2,891 of the 3,652 post offices on the RAOI list fall within the Census definition of “rural,” that could affect the plan in a big way.  Aderholt’s bill also limits the number of buy-outs the Postal Service offers postal employees working in rural offices to 10% of the total buy-outs.

The bill is good, but not as comprehensive as the “Postal Service Protection Act,” (S.1853) introduced by Senators Sanders, Gillibrand, Leahy, and Wyden earlier this month.  That bill addresses the health care prefunding problem and overpayments to the pension plans, gives the Postal Service expanded authority to introduce new products and services, protects 6-day delivery, and prevents the closing of rural post offices by giving the PRC “binding authority to prevent closures based on the effect on the community and the effect on the employees” and prohibiting the Postal Service “from considering whether a post office is turning a profit in making the decision to do a feasibility study for closure.”  This looks to be the best bill out there right now.

Honor roll: Finally, a big thanks to Nation Magazine and John Nichols for naming Save the Post Office to its Progressive Honor Roll for 2011 and for selecting it as the Most Valuable Website of the year.   Save the Post Office, writes Nichols, "became an essential resource for a network of grassroots groups in all fifty states defending local post offices — along with the idea that the founders were right when they argued that a strong postal service does not just deliver mail; it builds communities and links them as a nation."

That’s quite an honor, and I’d like to thank everyone who helped make it possible.  That includes all the readers — many of them postal workers — who have sent in helpful ideas for articles, information about post office closings, and other suggestions.  It also includes the guest bloggers like Mark Jamison, Sherri Maddick, and Don Cheney, who contributed such great pieces, and Kent Rose for his spoken word piece "There Used to Be a Post Office Here."  And a special thanks to all the websites that link to STPO, especially the postal news sites like Postal News, Postal Reporter, Postal Employee Network, and PostalMag.  Without directing traffic this way, Save the Post Office would be laboring in quiet anonymity, and without their efforts, who'd know what was going on in postal world?  And thanks to everyone for reading Save the Post Office.

Happy holidays to all.