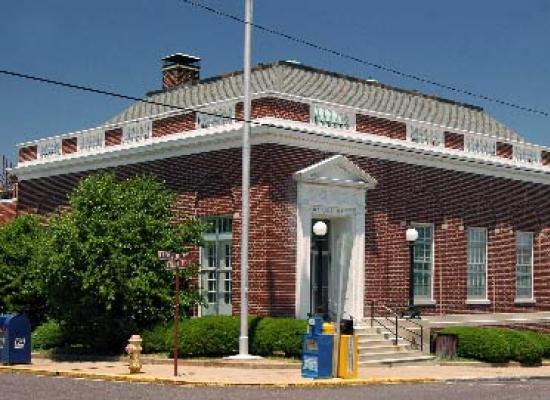 By National Trust for Historic Preservation on August 18th, 2010

A nearly two-year campaign to save a downtown post office might seem a bit bewildering to a city dweller. I can set out in almost any direction from my home in northeast Washington, DC and find a padded mailer for sale (behind bullet-proof glass unfortunately, in some cases) in five minutes flat. But the effort waged in Washington, Missouri to keep its Old Main Post Office open and operating was about more than just having a convenient place to buy postage stamps. It illustrates the importance of downtown’s historic assets to Washington’s economic development while preventing the loss of a key piece of the community’s fabric.

When the United States Postal Service (USPS) decided to close the station to offset financial loses, that was a direct affront to the downtown revitalization efforts of the Downtown Washington, Inc. (DWI) Main Street organization and its sister organization, the Historic Washington Foundation. Washington, a town of approximately13,200, is about an hour’s drive from downtown St. Louis.

For more than twenty years, DWI has worked to promote an attractive and financially stable downtown while preserving historic resources. The Historic Washington Foundation (HWF) promotes sensitive adaptive use of blighted or underutilized real estate while preserving the history of the community. A vacant historic landmark and a reduction of essential services within the downtown district was simply not part of their vision for Washington’s future.

So, the two nonprofit organizations took matters into their own hands. HWF made a bid to purchase the historic building with the goals of restoring it to its 1923 appearance, creating new retail space, and keeping the postal operations intact. Eighteen long and unpredictable months later, the purchase of the post office was approved and the property was transferred to HWF in late May, 2010. Work is now underway and is expected to take between 18 months to two years to complete.

Downtown Washington, Inc. has already moved into temporary office space in the property but once the lobby renovation is complete, the center of the building will serve as their permanent office. DWI will be joined by new and existing businesses at the project’s conclusion as well. DWI will manage the postal operations through a contractual arrangement with USPS. In the meantime, the Post Office is open for business and Washington leaders are ecstatic.

“We couldn’t be more excited,” said Bridgette Epple, executive director of DWI. “This really is a dream come true. We were literally jumping up and down when we heard the news.”

As a successful adaptive use project, the Old Main Post Office project will act as a catalyst for economic growth and impact the quality of life for the entire community. The project “will bring new jobs, contribute to the local economy and the support the city’s tax base,” says Richard Hopp, president of HWF. “The additional revenue to the city will help produce good roads, police protection, even more mundane things like park benches and plantings. That is what the population will see and feel and enjoy.”

Lauri Michel, Vice President of Community Revitalization at the National Trust for Historic Preservation recently visited Washington and the post office project and was struck by the “can do” spirit of dedicated individuals cultivating downtown living in Washington. She credits the wealth of relationships between the Main Street organization, business owners, lenders, City Hall and residents with creating a vision for Washington that revolves around a strong, vital downtown district and making it happen—one postage stamp at a time.

Erica Stewart is the outreach coordinator for the National Trust for Historic Preservation’s community revitalization department.

Reprinted from the National Trust for Historic Preservation.