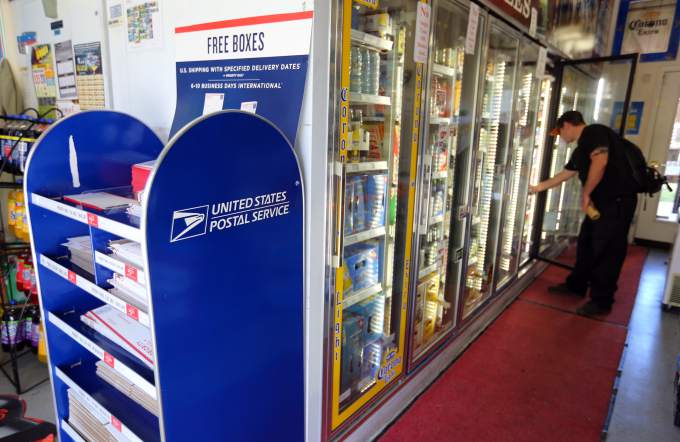 In a previous post, “It takes a Village Post Office, but for what?” we questioned the financial rationale for VPOs and asked why many of them were now being placed in densely populated areas.  Now there’s more reason to pose such questions.

A couple of days ago, an article in The Press Democrat touted the “debut” of some new Village Post Offices in Sonoma County, north of San Francisco.  A couple of them are right in the heart of Santa Rosa, where there are seven or eight post offices, all of them operating at regular hours, some with Saturday hours as well.  This map of Santa Rosa shows VPOs in red and the nearby post offices in blue.

The Postal Service has been putting VPOs in other urban areas, and California seems to be a popular location.  Nearly a third of the 74 VPOs created in August and September 2014 were in California.  In San Diego, where there about 25 or 30 post offices, the Postal Service has set up a half dozen VPOs. In Sacramento, there are now five VPOs, surrounded by 16 real post offices, as you can see on this map.

The usual justification for VPOs has been that they provide additional access to retail postal services in rural areas where the post office has had its hours reduced under POStPlan.  But Santa Rosa is not a rural area.  It has a population of over 170,000.  Sacramento and San Diego are much bigger.

The old rationale for creating VPOs doesn’t hold up anymore, so the Postal Service has come up with a new one.  According to Postal Service spokesman James Wigdel (in an email to the Press Democrat about the new VPOs in Sonoma), the VPO is “an innovative step toward generating revenue to ensure the long-term viability of the Postal Service.”

Wigdel explains that “the Postal Service continues to face declining first-class mail volume and therefore must continue to adapt to the demands of our customers to retain and grow our revenue base.”

But VPOs don’t really grow revenues. If you want to mail something, it might be a little more convenient to buy stamps or pick up a flat-rate box at a VPO, but you would probably have done your business at the post office, so it’s not as if the VPO is generating new revenue.  The VPO is simply siphoning off revenues from the traditional post office.

The actual justification for VPOs is not customer convenience or growing revenues.  Rather, VPOs — like all “alternate retail access channels” — are supposed to be a less expensive way for the Postal Service to bring in revenue.  As more and more customers learn to use these alternatives, the Postal Service can cut window hours at post offices, reduce their staffing, and save money.  Eventually, it becomes easier to close post offices completely.

It all comes down to pennies per transaction.  According to a 2010 USPS report, in order to bring in $1 in revenue at a post office, it costs the Postal Service $0.23 for postage and package transactions, and $0.31 to $0.39 for all retail transactions.   On the other hand, to bring in $1 at a Contract Postal Unit costs only $0.13.  The “retail partners” (e.g., stamps on consignment and approved shippers) cost the Postal Service even less  — only $0.02 to $0.07 per dollar of revenue.

Theoretically, VPOs are like these other alternate channels, and one would expect them to be a cheap way to bring in revenues.  But is this really the case?

VPO watchdog Steve J. Bahnsen recently wrote a great article for Linn’s Stamp News asking if VPOs were worth the money they cost to operate.  Mr. Bahnsen requests VPO data under the Freedom of Information Act on a regular basis.  You can see his most recent data as a spreadsheet here and a table and map, here.

The Postal Service would not release revenue data, but in order to refute Mr. Bahnsen and show that VPOs made money, the Postal Service revealed that it paid the 63 VPOs in Indiana a total of $79,880, and they sold more than $262,000 in stamps.

That sounds like a hefty profit, but these numbers suggest that it’s costing about 30 cents to bring in one dollar of revenue at a VPO (and that doesn’t include signage and administrative costs).  That is about the same as it costs to bring in a dollar at the post office, and it’s much more than the costs of other alternate retail channels.

The numbers may be worse.  According to the VPO spreadsheet, the Postal Service is paying out about $1.2 million in fees to the 760 VPOs in operation.  Add signage and administrative costs, and the total is probably around $1.4 million.  If the typical VPO brings in about $4,160 a year — the average for Indiana VPOs — revenues would total about $3.2 million.

That would mean the Postal Service is spending about $0.44 to bring in one dollar in revenue at VPOs — much more than it costs to bring in a dollar at a post office.

One possible explanation for this 45 percent increase is that the Postal Service is putting more VPOs in densely populated areas where the rents are higher.  Or maybe the Postal Service is finding it necessary to pay more in order to convince retailers to devote floor space for a rack of flat-rate boxes and pay their workers to help with the postal business.

Whatever the explanation, one has to wonder, if VPOs don’t bring in much revenue and their costs are disproportionately high compared to other retail channels, why does the Postal Service continue to create new VPOs at the rate of almost one per day?

Perhaps the Postal Service is not all that interested in the bottom line on VPOs.  Perhaps management just wants to do everything it can to encourage customers to do their business anyplace but a post office.  Putting postal stores in chains like Staples and Walmarts will accomplish that much more effectively than locating VPOs in independently operated convenience stores, but perhaps the Postal Service figures that every little bit helps.

The Postal Service doesn’t like to explain things in such terms, but union workers see what’s going on.  As APWU spokeswoman Sally Davidow puts it, “What is the Village Post Office accomplishing?  It’s taking work away from the public post office.”

All the numbers aside, it’s sad to think that the VPO represents the future of the Postal Service.  The grand post offices in Berkeley and the Bronx are sold off as mere real estate, and the proud institution of the small town post office gets gutted by POStPlan.  What do we get instead?  A rack of flat-rate boxes in a convenience store.

(Photo credit: VPO in a deli in Santa Rosa, CA)