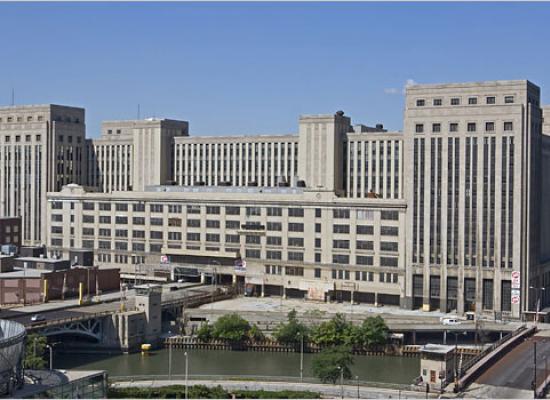 In 2009, the Postal Service sold the historic Old Main Post Office in Chicago to British real estate developer Bill Davies for $24 million.  A couple of years later, the Postal Service also sold Davies the postal annex to the east of the MPO for $14 million.  After scuttling plans to develop the property with twin towers, Davies put it up for sale late last year.  In December 2014, Chicago-based Sterling Bay offered to buy the building for $150 million, but Davies rejected the offer.

Last week, news came out that another company, Gulf Resources Development & Investment, based in the United Arab Emirates, was negotiating to buy the Old MPO, and again the price was $150 million.  A few days later, Davies killed this deal too and said he'd be developing the property himself.

The 2.7 million square foot building was constructed in 1921, and it's on the National Register of Historic Places.  In 1966, postal work at the MPO came to a virtual halt when 10 million pieces of mail clogged the system for a week.  In 1996, the building was vacated and replaced by a new facility across the street.

In 2006 the General Accounting Office reported that it cost $2 million a year to maintain the retired building, so the Postal Service had good reason to sell it, whatever the price.  But at this point in time, it may be worth asking, How could the Postal Service have sold the building for $24 million, and then it turns out to be worth $150 million?  Seems like Mr. Davies got himself quite a deal.