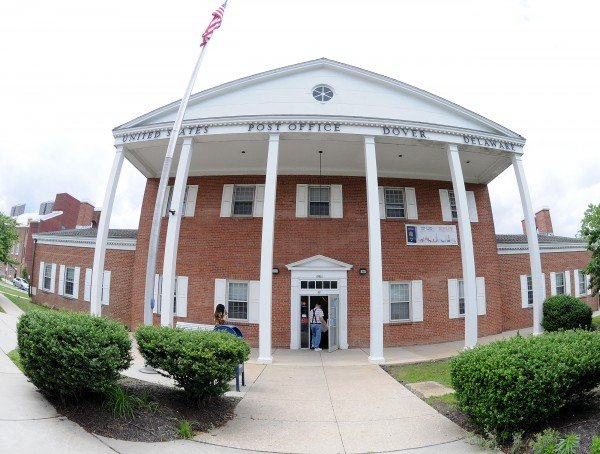 There haven’t been many details available regarding the relocation of the Dover Post Office since Dover Mayor Robin R. Christiansen received a letter from the U.S. Postal Service announcing its intention of moving.

That will change at the Dover City Council meeting Monday at 7:30 p.m. in the Council Chambers at City Hall at 15 Loockerman Plaza.  A Postal Service representative will make a presentation explaining why it is planning to vacate the city’s landmark 55 Loockerman Plaza location after a stay of five decades.

At the public meeting, the USPS said it “will identify the need, identify the tentative decision to relocate retail services, outline the proposal to meet the need for relocation, invite questions, solicit written input on the proposal, and provide an address to which the community and local officials may send written appeals of the tentative decision and comments on the proposal for a period of 30 days following the public meeting.”

Two things appear to be certain among city and USPS officials – there is a definite need for a new post office and it should be built near its current location downtown.

Mayor Christiansen believes the city will be best served by making moving it somewhere in the downtown area, where it has remained during four different location shifts through the years.

“Traditionally my preference as an individual and in a historical sense is to continue to have a post office presence in the downtown area,” the mayor said. “That way it can continue to be an economic driver by bringing people into the area with the plan to make it convenient for them to do business there and meet their needs.”

When the post office settled into the current facility on city-owned land in 1964, the mayor said it was built to last five decades, which have now passed. The current lease expires in 2020.

“While it was the U.S. Postal Service who decided not to renew the lease, I think it is a good time for a new post office in the city,” he said. “Since 1964, the post office has been at its current location and much has changed over the past 50-plus years….

In his letter to Mayor Christiansen, Richard Hancock, a real estate specialist with the USPS, wrote, “The Postal Service is relocating because the current lease cannot be renewed. The ‘relocation project’ will consist of procuring a suitable substitute location, preparing the new location for use as a post office and then transitioning the retail services to the new location.” Read more.