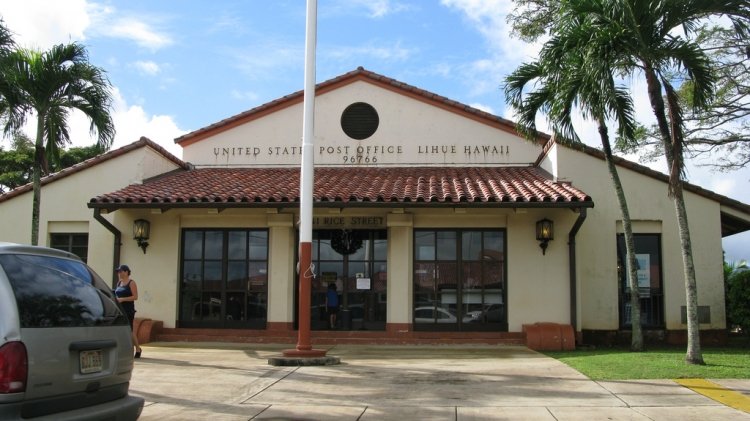 As reported in HawaiiNewsNow, U.S. Postal Service is considering closing the Lihue post office on Kauai, but the public still has the opportunity to weigh in on the decision.  Officials posted a sign at the location on Rice Street, saying the building is no longer necessary for postal operations.  This location is the only one in town, notes the news article. The next closest post offices would be in Kapaa or Koloa.  The public has until Feb. 8 to submit comments.

In an update on Hawaii News Now story, the Postal Service explains that it’s not actually closing the Lihue post office; instead, it plans to relocate retail operations to a carrier annex about 1.3 miles from the current post office.  There’s more about that here.

The relocation plan is already becoming controversial.  The president of the local chamber of commerce has expressed concern about the impacts on local businesses and downtown revitalization plans.

Pat Griffin, president of the Lihue Business Association, told The Garden Island News:  “Although the proposed move might be narrowly good for the USPS, it is bad for the life of the community.  We hope that postal officials will gain a larger perspective of the Rice St. facility as an central part of this community and scrap plans to abandon the town core.”

In addition to providing postal services at the annex, residents can also use the post offices in nearby towns, but there’s not very near by.  According to the USPS location finder, the Kapaa and Koloa post offices are both 7 miles away, but that’s as the crow flies.  According to Google maps, the actual distance from the Lihue post office to the Kapaa office is over 8 miles, a 12 or 13-minute drive; there’s apparently a lot of traffic on the route, so it’s probably longer.  From Lihue to Koloa is over 10 miles, a 17-minute drive.

According to Wikipedia, the Lihue post office was built in 1939 under the New Deal. It was listed on the National Register of Historic Places in 1989.  The Mission Revival style architecture of the building is an accommodation to local citizens who did not want the standard neo-classical design of many mainland U.S. post offices.

Since the Postal Service already owns the Lihue post office, it won’t save lease costs by relocating, and the employees will be transferred, so there won’t be savings on labor costs either.  But closing the downtown Lahue office would allow the Postal Service to sell the historic building, which seems to be the main goal.