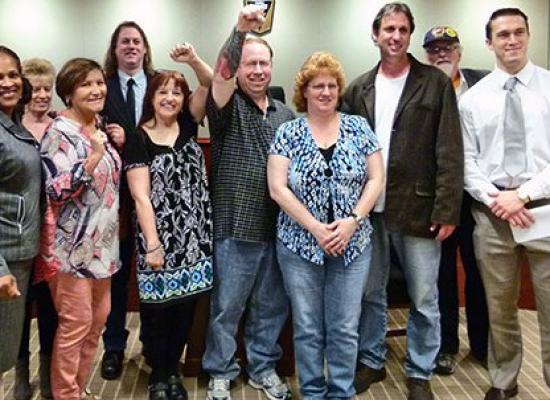 Last week postal workers took the fight to stop the consolidation of mail processing plants to the nation’s capital.  On Wednesday, April 10, employees representing several communities and APWU locals traveled to Washington, DC, to meet with their elected officials and protest the Postal Service’s decision to accelerate the consolidation of 55 mail processing plants that had been scheduled for 2014.

Several APWU locals have also filed formal Complaints challenging the Postal Service’s plan with the Postal Regulatory Commission.  While in DC, union representatives and other postal workers attended a meeting of the PRC to make their case in person.  The video above includes the audio of the twenty or so minutes they spent talking to the Commissioners at the end of the meeting.  (You can listen to the podcast of the entire PRC meeting here.)

The postal workers were accompanied on their visit to the PRC by Congressman Sean Patrick Maloney (NY-18), who wanted to testify on behalf of the hundreds of employees at the Mid-Hudson Postal and Distribution Center in Newburgh, New York.  Maloney was the first member of the House of Representatives to testify in person before the PRC.

“I’m outraged at the Postal Service’s decision to consolidate the Newburgh facility an entire year earlier than the original deadline,” said Congressman Maloney, “and I will continue fighting to ensure that this consolidation does not impact employees or their families.”  You can listen to Rep. Maloney’s entire statement to the Commission here.

The complaints and the comments to the PRC may spur the Commission to do something, but as Chairman Ruth Goldway said at the end of Wednesday’s meeting, there’s not much the PRC can do.

“We’re the regulator, not the operator of the Postal Service,” said Goldway, “and what the law directs us to do is somewhat limited, especially when it comes to plant operations, but we will look at the complaints that you filed and we will consider the comments you made about efficiency and service and we’ll see what it is possible that we can either advise the Postal Service to do or direct them.”

The Mid-Hudson Area APWU Local was the first to file a complaint about the consolidations with the PRC.  Similar complaints have since been filed by APWU Helena Local 649 (Helena MT CSPDC); Greater East Texas Area Local (East TX Processing & Distribution Plant in Tyler TX); Red Bank Area Local (Monmouth P&D Center in NJ); the Bakersfield Area Local (Bakersfield P. & D. in Bakersfield, CA), and Booklyn Local 251 (Brooklyn P&DC).   More complaints are expected to be filed over the coming days. You can read more about the complaints in this previous post.