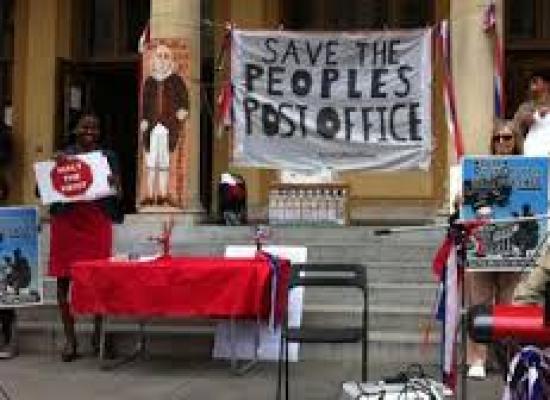 Lydia Gans writes the following: "The sudden attack by the city on the four week long camp-out to save the Berkeley Post Office was a sad ending to a spirited and peaceful action that was in the interest of the community. With people staffing a literature table and gathering petitions, urging folks to write letters in addition to organizing marches and concerts, the campers did an impressive job informing and educating the public about the issues involved. And they inspired, and were inspired by the protests at the many other post offices around the country facing the same threat.

"After weeks of tacit support from city officials and non interference by the Berkeley police, statements appeared in the newspapers of the city manager's concern about 'violence and criminal activity' in the camp. It is unfortunate that the press published the official statements but made no effort to talk to the campers. Many of the stories that appeared in the papers were gross distortions if not outright lies."  Read more.