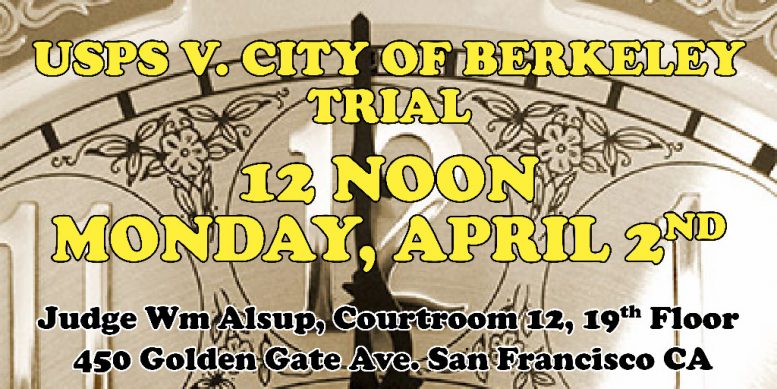 Save the Berkeley Post Office: At 12 Noon on Monday, April 2, 2018, the lawsuit initiated by the United States Post Office and the United States Department of Justice against the City of Berkeley will come to trial. Back in August of 2016, the Feds initiated this suit in a challenge to the right of the City of Berkeley to pass a Zoning Overlay Ordinance designed to protect the character of the Berkeley Historic Civic Center District.

The USPS/ DOJ argued that the Zoning Overlay results in a “total frustration” of the ability of the USPS to manage its assets.  At the Motion for Summary Judgment hearing on January 11, 2018, Judge William Alsup told the DOJ attorney that “…if it just comes down to we could get more (money for the Berkeley Main Post Office) without the overlay, you’re going to lose because that’s not total frustration.”

The trial on Monday, April 2nd, will be a bench trial before Judge Alsup. Both USPS/DOJ and the City of Berkeley are relying on the submittals before the court as of the January 11, 2018 Motion for Summary Judgment. Both sides will have one hour each to present oral arguments to Judge Alsup.

These three documents provide a good summary of the arguments to date: