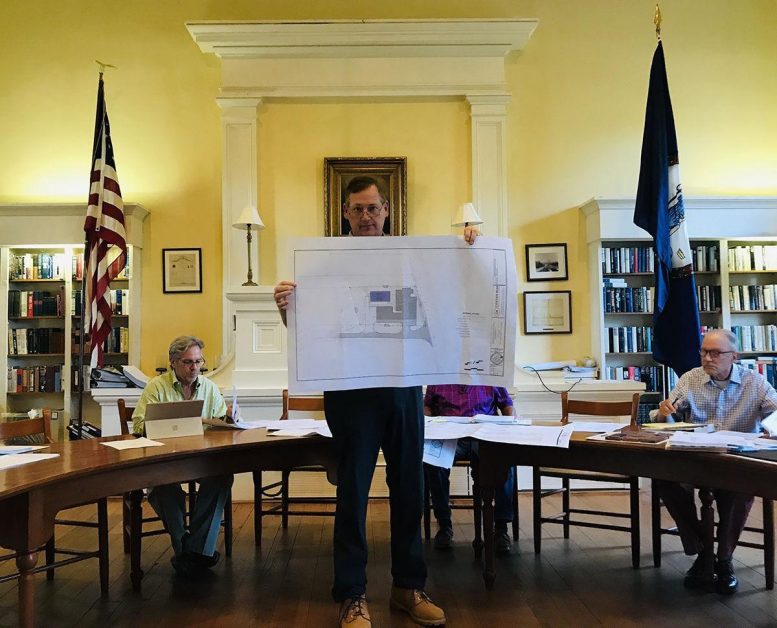 insidenova.com: After a long hard fought battle, the Town of Washington, Virginia, has preserved its centuries-old post office.

Rather than issuing any formal statement regarding its decision to reverse course and keep the circa 1804 post office within the county seat, the U.S. Postal Service simply allowed developer Tim Tedrick of Mid Atlantic Postal Properties to appear at Washington Town Hall last evening (Wednesday) with new post office site plans in hand.

“An ‘endless’ process which finally has ‘ended’ with the decision to stay in town,” remarked a visibly pleased Sullivan after seeing the architectural drawings for the first time….

It was two years ago that the post office announced it was leaving its current Main Street location and almost a year since it was revealed by a third party that it would leave the historic town altogether for a new highway location midway between Washington and Sperryville.

To say the town was caught off guard by the abrupt change in strategy — and lack of communication — by postal officials would be an understatement. Catlin and Sullivan called postal officials’ site selection process “opaque and non-transparent,” detecting “behind-the-scenes-machinations” they couldn’t understand.

The Rappahannock News later discovered that a top U.S. Postal Board official  in Washington, D.C. had abruptly weighed in on the site selection, prompted by an influential Rappahannock resident —  a former chairman of the U.S. Postal Service’s governing body [James Miller] — who personally wanted a new highway location two miles south of the town.  Read more.  (For more background, see this earlier article.)