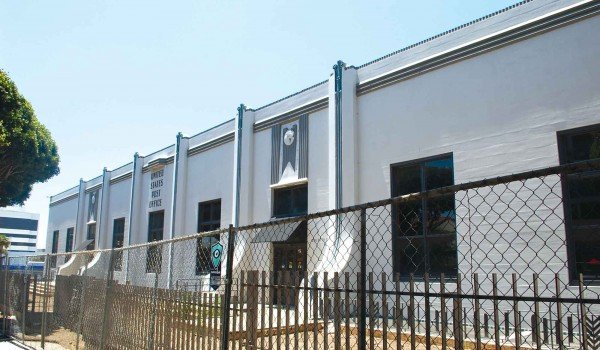 SkyDance Productions purchased the property in 2014 for about $27 million and has received entitlements to modify the building. However, the company has already outgrown the space and won’t occupy the site.

The application to reuse the building included a remodeled interior and construction of a new addition at the rear of the building. The remodel would reduce the first floor from 17,516 to 16,146 square feet, convert the 2,645-square-foot mezzanine level to an 8,508-square-foot second floor, add an 8,148-square-foot third floor and increase the basement from 13,807 to 16,516 square feet. The project proposes a new 32-foot-tall, 14,490-square-foot building to be built at the rear of the existing landmark building.

However, in the three years since purchasing the site, the SkyDance has grown substantially. Trevor Nelson of Pegasus Investments (who along with TC Macker and Lee Polster of Coldwell Banker have been hired to facilitate the sale), said SkyDance now has too many employees to fit in even the rebuilt project. Therefore, owner David Ellison has decided to put the building back on the market and look for a larger space in the Santa Monica area.

“He did not go into it with the idea of buying and reselling,” said Nelson. “He hoped this would be the forever home of the company.”

Nelson estimated the building could be sold for as much as $40 million but said the price hasn’t been set and the seller is taking offers to determine market value.  Read more.