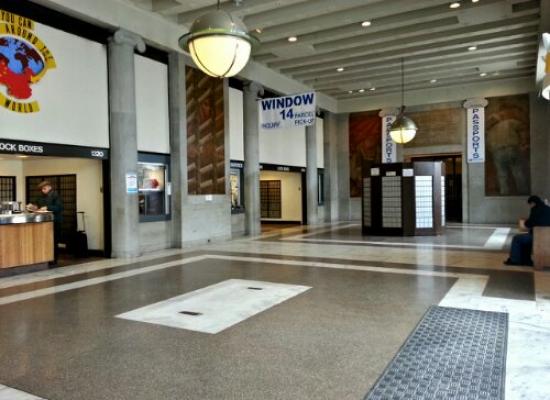 The Postal Service is moving forward on the sale of the historic Bronx General Post Office at 558 Grand Concourse in New York City.  The property is listed on the USPS-CBRE Properties for Sale website, where a new Call-for-Offers announcement says interested parties should submit their bids by 5:00 p.m. on January 15.  (The listing is here.)

The announcement doesn’t list an asking price as the Properties for Sale website does for many other postal properties, but the Bronx GPO is also listed on LoopNet and PropertyShark with some prices.  The total assessed value is $6,581,700, and the current value of the building is $14,626,000.  There are details and photos about the property on this CBRE flyer.  (You need to be a member to see the LoopNet info, so a pdf is here.)

None of these website listings is dated, so it’s not exactly clear when they were first posted.  There’s a cached version of one page with information about the sale dated November 7, so that may be when the listing first went up on the Properties for Sale website.  On the current version of the listing, the notice announcing the Call-for-Offers is printed in a red font and it starts out “NEW.”  Based on the cached versions of the site, it appears that this Call-for-Offers notice was posted on January 1.

Those dates fit roughly with what the original posting said: “CBRE, Inc. will be conducting a 45-day marketing program to allow time for all interested parties to tour the property and collect all necessary information.  It is anticipated that a Call-for-Offers date will be set for mid-December.  When finalized, the Call-for Offers date will be posted on this website.”

Presumably, then, the 45-day marketing program began in early November, and the Call-for-Offers was postponed from mid-December to the first of the year.  Interested buyers were then given two weeks to submit their bids.  It's pure speculation, but given the short time frame, there may be an interested buyer — or several — waiting in the wings.

In those few cases where there were deadlines, they were usually properties that had been listed for a long time, not just 45 days or a couple of months, before the deadline was set.  It seemed that the Postal Service just wanted to get the sale over with so, it turned the sale over to the GSA for action.

On the other hand, CBRE recently set a bid deadline on the Palmer Square post office in Princeton, New Jersey, explaining that the final call-for-offers was "due to the competitive nature of the offers" it had received.  In November 2012, CBRE set a January 15, 2013, deadline on bids for the big downtown post office in St. Paul; a buyer was announced on March 1. 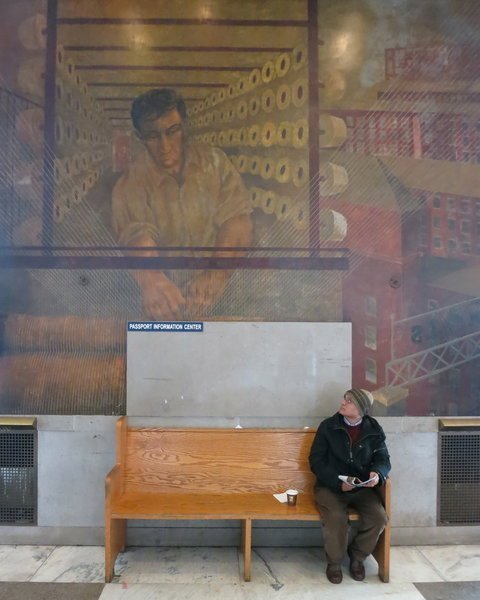 The Properties for Sale listing on the Bronx GPO also contains a page with downloads for two documents that give some indication of how the historic post office and its priceless murals will be preserved.  One is a draft of an Agreement for Loan of Artwork from the Postal Fine Arts Collection.  It’s dated November 7, 2013, so that is presumably about when the page was posted online.  It concerns the thirteen Depression murals in the building painted by Ben Shahn and Bernarda Bryson Shahn.

The Agreement refers to “the Mural” rather than murals, which suggests that it’s essentially boilerplate and a version of similar agreements that have made concerning other post office murals, such as the one in Venice, California.

The Agreement says the Mural will remain at the building for display and that it will remain the property of the Postal Service “for a term of 25 years from the date hereof,” with options for five-year renewals after that. The new owner of the building is thus considered the “Borrower” of the murals and not their official owner, even though this "Borrower" will have almost total control over who can see the murals and under what circumstances.  There are also details in the Agreement about making reproductions of the murals, insuring it, protecting it, and so on.

The second document is the Preservation Covenant concerning the preservation of the building and the murals.  It says that the new owner will be required to “preserve those qualities that make this property eligible for listing on the National Register of Historic Places.” 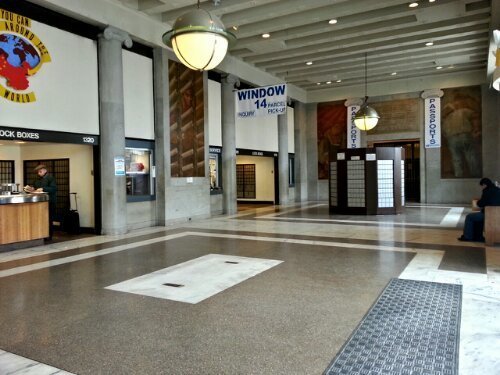 The covenant indicates that the owner must obtain the approval of the New York City Landmarks Preservation Commission and the New York Landmarks Conservancy before making changes in appearance, materials, colors, and workmanship.  The historic features that must be protected are defined as the exterior envelope of the building and the interior lobby area.

Even were the sale to be finalized sometime soon, it appears that the post office will remain in the building for several months to come.  The Postal Service has not yet identified the new site for the “relocation” of the post office.  When it went through the public participation process for the relocation last spring, it said that the new location was “yet to be determined,” and that is apparently still the case.

The relocation decision was itself the subject of considerable controversy.  Elected officials, neighborhood residents, and postal workers felt that they had not been given sufficient opportunity to give input into the decision. 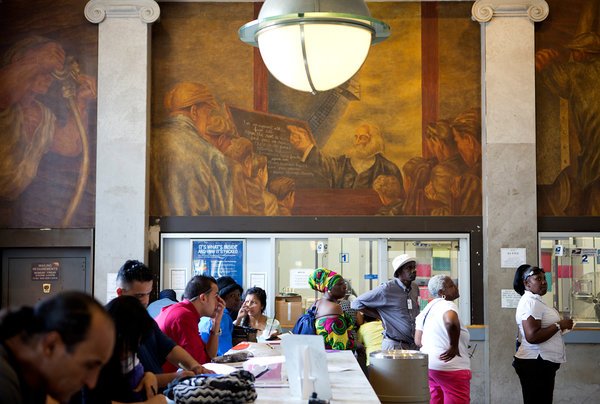 The Postal Service's initial decision to close the Bronx GPO, sell the building, and relocate retail services was announced on March 14, 2013.  Letters of appeal were submitted by twenty-one individual citizens, plus the Executive Director of the Bronx River Art Center, the President of the East Bronx History Forum, the National Post Office Collaborate, the National Trust for Historic Preservation, and the Office of the Bronx Borough President, whose lettter was also signed by nine New York City Council members, ten New York State Assembly members, six New York State Senate members, and three members of the U.S. House of Representatives.

The appeals failed, and on June 3, USPS Vice President Tom Samra announced his final decision to proceed with the relocation and sale.  On July 3, several Bronx residents, along with yours truly, Steve Hutkins of Save the Post Office, filed an appeal with the Postal Regulatory Commission.  On August 8, the PRC dismissed the appeal on the grounds that relocation decisions are outside of its jurisdiction.

Attorney Elaine Mittleman, acting on behalf of Hutkins and Bronx activist Julio Pabon, appealed the PRC’s ruling to the U.S. Court of Appeals (District of Columbia).   The Court is currently deciding whether or not it has jurisdiction over three other cases brought by Ms. Mittleman against the PRC.  (The consolidated brief on that case is here.)  Once the Court makes a decision on that case, which may happen any day now, it will consider what to do about the Bronx appeal.

The fact that the relocation decision on the Bronx GPO is being challenged in federal court will have little bearing on the sale.  The relocation of the Venice post office is part of the Mittleman appeal, but that building is no longer a post office and it never will be.  It was sold to movie producer Joel Silver, and it now serves as his studio’s offices.

The DC court may one day have something to say about the Bronx post office, but by then, the building will probably have been sold and the Postal Service will be renovating the space on the new post office for the neighborhood.

For more on the sale of the Bronx GPO: