The Postal Service is rolling out its inaugural “Village Post Office” this week, and it's the cutest little place you ever saw.  It’s called “Red’s Hop N’ Market,” and it’s located in the small town of Malone, Washington, pop. 473.

The Postal Service closed Malone’s post office on August 9, and it opened the Village Post Office (VPO) in Red’s the next day, right across the road.  Talk about a smooth transition.  And the Postal Service did an outstanding job staging the debut.  All that was missing was the ribbon-cutting ceremony.

Red’s looks like the quintessential mom-and-pop convenience store.  Red himself isn’t around, but it’s definitely a family-run business — Cheryl Lee and family have been running the store for the past five years.  The Postal Service wasn’t taking the event lightly, and it brought out the heavy hitters for the news media — Dean Granholm, VP of USPS operations, and Lee Fritschler, a scholar at George Mason University. 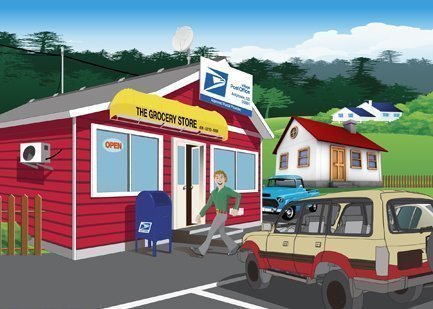 “Malone was costing us about $85,000 to $90,000 a year and was bringing in less than $20,000 a year,” Granholm told American Public Media’s Marketplace, which did a spot on the “debut.”  Putting a scaled-down version of the post office inside a store will be much cheaper to operate.

How much cheaper isn’t clear.  The old post office, which had been there since 1982, was paying $450 a month, just $5,400 a year — pretty typical for a small rural post office.  The salary for the postmaster and two part-time postmaster reliefs (PMRs) may be a cost-saving, but postal workers at other locations will have to pick up some of the slack, and there’s also a fee to be paid to Red’s.

Plus, folks in Malone are going to have put some extra gas in the tank to drive five miles to Elma when they need to do things you can’t do at Red’s — like anything requiring weighing, rating, scanning or tracking (there's no Contract Access Retail System at Red's), plus money orders, passports, bulk mailings, change of address forms, etc.  Given how limited the Village Post Office is in the services it provides, maybe VPO should stand for "virtual post office."  But there will be nothing virtual about the extra gas folks will have to pay for — not that this cost will show up on the Postal Service’s books.

Marketplace doesn’t provide any details about the contract with Red’s.  It’s probably similar to the way they set up a “contract postal unit” (CPU). For a small operation, the Postal Service and business arrange a firm-fixed contract, in which the business is paid a fixed annual rate in twelve monthly installments.  Marketplace says the Postal Service paid Red’s $2,000 to become the new Village Post.  That's the annual fee, and it includes retail space.  It's not much (it ought to be the monthly fee), it's locked in for two years, and it's almost impossible to get an increase out of the Postal Service.  That's one of the main reasons businesses drop their CPU contracts.

The Markpetplace report also doesn’t say anything about how Red’s was selected to be a Village Post Office.  In its responses to interrogatories for the PRC Advisory Opinion, the Postal Service said that to get a VPO started, “management in the field will solicit vendor bids, and they will award firm fixed price (flat fee) contracts establishing the terms and conditions under which each VPO will operate.”

There’s no mention of the solicitation of vendor bids in the Marketplace piece.  Maybe the Postal Service skipped that stage of the process.  CPU contracts are supposed to be competitive, but the Postal Service can use a “noncompetitive purchase method” when it’s done business with the retailer before in other locations or when “the proposed CPU is the only supplier capable of providing or willing to provide the service needed” (Postal Employees Guide to Contract Postal Units). That may have been the case with Malone — it’s not as if there are a lot of other convenience stores in town.  But does that mean the Postal Service is going to skip competitive bidding on a couple of thousand Village Post Offices since most of them are going to be in places like Malone?

The process for setting up and managing CPUs is very complicated, but all the bureaucratic rules are supposed to ensure fairness, prevent corruption, and maintain quality control.  Besides competitive bidding, CPUs involve a Needs Analysis to determine appropriate locations; putting letters and ads in local newspapers lookng for interested "suppliers"; meeting with the chamber of commerce and community associations to discuss possible suppliers; information meetings with prospective suppliers; solicitation of proposals; a Business Proposal Information sheet; "supplier presentations," where the potential suppliers present their case; a surety bond to guarantee the USPS inventory; and so on.  There are several thousand CPUs that have carefully followed these procedures.  Is that all going out the window for the VPOs?

One of those rules is that contract units “must not be located in, or directly connected to, a room where intoxicating beverages are sold for consumption on the premises.”  Presumably that's to protect the USPS "brand."  But the storefront window for Red’s shares its new USPS sign with neon signs for Budweiser and Miller lite, and it looks like the kind of place they might kick back and pop open up a cold one.  Is someone going to be watching out for violations?  A postal work caught with alcoholic beverages or Lotto tickets (also available at Red's) would be terminated, but apparently that doesn't apply to contract unit workers.

The other big gun quoted in the Marketplace piece was Lee Fritschler.  He’s only one of the country’s leading scholars of the postal system, a former chair of the Postal Rate Commission (predecessor of the Postal Regulatory Commission), and the principal author of a very important study that was commissioned by the PRC called “Universal Postal Service and the Postal Monopoly.”

Asked about the significance of the new VPO, Professor Fritschler says, “It's not, I would say, a drastic change. It is a marginal change.”  Perhaps if the concept catches on, says Fritschler, it could replace thousands of money-losing post offices. “If I could do my mail business while I was shopping for my Cheerios and Wheaties at the local supermarket, I think I would view that as a real convenience.”

Too bad that Professor Fritschler didn’t have the opportunity to explain why replacing thousands of post offices with VPOs is a very significant matter indeed.  It’s not simply a question of convenience, although that’s what the Postal Service would like you to think.  The whole rationale for closing post offices rests on the premise that “customers” (never “citizens”) have shown their preference for doing business at the ever-expanding network of “alternative retail outlets” like Walgreens, Walmart, Office Depot, Sam’s Club, Costco, Staples, CVS, and Safeway.

In the study he wrote for the PRC, Fritschler devotes several pages to a thoughtful examination of the statutes concerning closing post offices and the two sides of the issue.  He shows clearly that what’s at stake is a lot more consequential than being able to buy stamps while you pick up your Wheaties.

On the one hand, the report  points out, the Postal Service has “the authority to select and locate facilities which are ‘consistent with reasonable economies of postal operations.’”  Title 39 gives the Postal Service the power generally “to determine the need for post offices … and to provide such offices … as it determines are needed.”

On the other hand, the study notes, there are limitations on the Postal Service’s power to close post offices: laws about the procedures for closing post offices, the factors that must be considered, the appeals process, and the fact that the law says, “no small post office shall be closed solely for operating at a deficit, it being the specific intent of the Congress that effective postal services be ensured to residents of both urban and rural communities.”

The study proceeds to a discussion of the “societal benefits” of the post office:  “The Postal Service binds the Nation together through its omnipresence in communities across the United States.  It is the physical representative of the United States, and is frequently the primary contact many citizens have with the Federal government.”

The study notes that many federal agencies depend on post offices to provide critical services to citizens—the Department of State (passports), the Selective Service System (registration for Selective Service), the IRS (tax forms), voter registration, even homeland security — the Postal Service is often a first responder.  Finally, says the report, “In remote areas, post offices provide community identity and a place for interaction.”

The unofficial town historian for Malone and a fill-in for the postmaster on Saturdays, Nancy Graves told Marketplace that some people were concerned about replacing the post office with a Village Post Office. “A lot of people are worried about the security because people still get their checks through the mail.”

UPDATE: The Seattle PI has more details about the first VPO as Red's.  There will be post office boxes available, but there are outside, and patrons are worried about security.  The article says the USPS says there will be no layoffs because the one staff member will be transferred to another location, but there are also two postmaster relief positions that will be disconinued — not mentioned in the article.

Also, if you're into philatelics, you'll be interested to learn that the Village Post Office at Red's will not have its own postmark.  Evan Kalish, webmaster for the Post Mark Collectors Club, notes that VPOs will not have any hand-cancellation devices available, which is disappointing for collectors.  It also seems contrary to USPS's own regulations, which states that all communities served by a Post Office must necessarily make a Local Postmark available (POM 312.2).  In overlooking or flat-out denying the service, it seems that USPS doesn't consider VPOs to be on a par with independent post offices.

(The entire Guide to Contract Postal Units is here.)