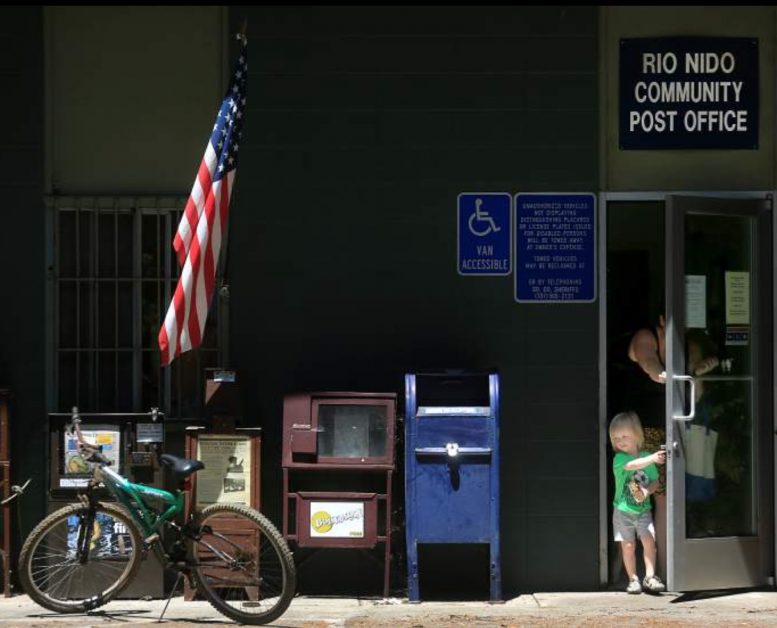 sonomawest.com: Postal customers were buzzing on Saturday over the sudden closing of the post office in Rio Nido, Calif., a small town near Santa Rosa.  (It’s a contract post office, so the Postal Service does not hold a public meeting or follow any of the other steps in a normal discontinuance process.)

“This is upsetting to all of us,” said Joy Given, a 30-year resident of Rio Nido where the post office has been a fixture since 1908.

The U.S. Postal Service on Friday told customers the Rio Nido Post Office will shut its single retail window for good on Tuesday, June 20. Box holders who get their mail in Rio Nido can still pick up letters and packages there until the end of the month, June 30. After that the boxes will be physically removed and relocated to the Guerneville Post Office on Mill Street, said Friday’s postal service announcement.

Rio Nido residents accustomed to walking to the post office located in the fire station building on Canyon Seven Road will now have to go three miles to Guerneville to pick up their mail, said Given. For some it will be a hardship.

“Do you know how many people here don’t have cars?” said Given.

Rio Nido has approximately 350 post office box customers whose mail will be available in Guerneville starting Monday, July 3, said the USPS announcement. “There will be no changes to the PO Box numbers or mailing address.”

The decision to close the tiny postal facility in the firehouse building was based on a money-losing trend at the operation, said USPS spokesman Augustine Ruiz Jr.

“There has been a steady decline in office visits since 2012, which has caused as much as a 122 percent loss in revenue through 2016, said Ruiz. “From 2012 through 2016, the revenue declines have outpaced the cost in compensation to maintain the contract.”

The Rio Nido postal operation is a contract post office (CPO), meaning the day-to-day operation is contracted out to a private bidder.  Read more.

There’s more about the closure in the Press Democrat, here.