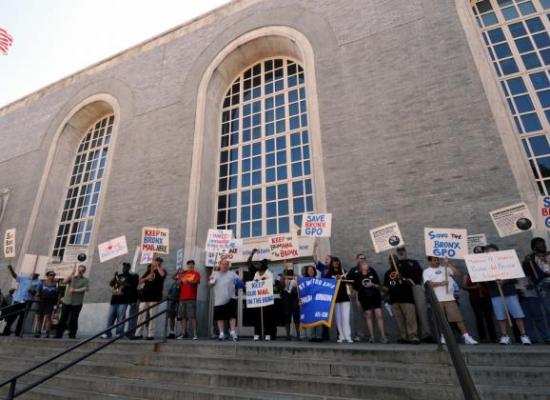 Community-Labor United for Postal Jobs and Services (CLUPJS), a coalition of postal workers and community activists, is calling for a protest to stop the sale of the historic Bronx General Post Office on July 26 and 27.  Read more.

CELEBRATE THE FOUNDING OF THE POSTAL SYSTEM JULY 26, 1775

Bureaucrat Tom Samra, USPS Vice President of Facilities and USPSappointeehas the audacity to decide to illegally close the Bronx Post Office, and sell the facility that has served the Bronx community for over 75 years. Not so fast! This unelected USPS hatchet man can’t sell what the USPS DOESN’T OWN. Samra is violating statutes and regulations which preserve this Bronx historic institution. Don’t trust the mouthpieces of the 1%ers.

TITLE Defines Ownership! The Post Offices Belong to the People

For almost three hundred years, ever since the Continental Congress mandated the first post office and appointed Benjamin Franklin the first Postmaster General, the network of tens of thousands of post offices were built and serviced by the labor movement and their communities. It is also embedded in the U.S. Constitution.

Just like any homeowner who holds the TITLE when they contract to invest in property, they are the owners and legally can’t be evicted. These petty post office bureaucrats have defied the workers and the community surrounding the Bronx Post Office by ordering the BPO EVICTION.

IT CAN AND MUST BE STOPPED. Celebrating the founding of the first post office, coordinated protests are being organized on July 26 and 27 from Oakland to New York and in between.  Eight thousand publicly owned post offices will be up for sale and must be defended. Rallies, marches, creative activities are in the planning stages. The Bronx Post Office is the largest and the oldest with over 75 years of service to the surrounding communities.

Defend the workers, primarily people of color, Latino/a, Black, Asian, veterans, and women who live in the Bronx, and their unions, jobs, and benefits. CLUPJS, a coalition of postal workers and community activists has battled the USPS and their allies in the corporate and financial world. CLUPJS is calling for a UNITED ACTION, organizing with other constituencies and organizations to stop the cuts, closures and consolidations that are dismantling, privatizing and selling off historic post offices

The message of the petty USPS bureaucrats to the BRONX residents “Drop Dead-The GPO Must Go,” MUST be answered with a massive outpouring of city residents on July 26-27 to demand