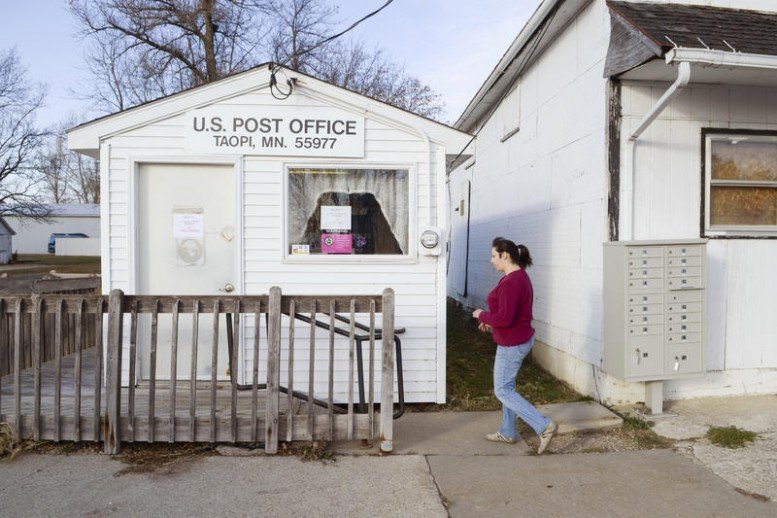 Yesterday the Postal Service provided the Postal Regulatory Commission with some lists and other material for the annual compliance report.  They include the post offices that were closed and suspended during fiscal year 2012 (October 1, 2011 to September 30, 2012), as well as information about retail revenue sources and Contract Postal Units (CPUs) and Village Post Offices (VPOs).

You can download the lists from the PRC website here.  To make access simpler, we’ve posted the lists on Google Docs, where you can see them in the original spreadsheet form.  [Google Fusion Tables (with the maps) was shut down on Dec. 3, 2019.  The links to tables and maps are therefore broken.]

The Postal Service has provided a table that shows the sources for retail revenues.  Because the big mailers are not considered “retail,” the retail revenues account for only a portion of the agency’s total revenues — about $17 billion out of $65 billion.  The big mailers take their mail to pre-sort companies or directly to USPS Bulk Mail Entry Units.  “Retail” therefore applies to the average customer — individuals, small businesses, etc.

The following table indicates the “channels” through which the Postal Service takes in its retail revenues.

The only significant source of retail revenues aside from the post office is PC Postage, which refers to vendors and authorized providers who print their own shipping and postage labels, such as Click-N-Ship, PayPal Ship Now, eBay’s Shipping Label, and Dymo Stamps.  Retail revenues from PC Postage have naturally increased along with the rise of e-commerce — and thanks to promotional efforts by the Postal Service.

Stamp sales by retail partners account for a mere 7 percent of retail revenues.  That’s despite the fact that there are about 32,000 post offices (not including contract units) and over 63,000 retail partners.  Plus, revenues from those partners are virtually flat since last year, with an insignificant increase of 0.2 percent — despite all the effort the Postal Service has put into its USPS Everywhere campaign.

In fact, now when you go to the USPS “find locations” page, the default for “location types” is not post offices, but “post offices and approved postal providers.”  The Postal Service is doing everything it can to encourage customers to look for alternatives to its network of post offices.

It will be interesting to see how post offices revenues fare over the next couple of years as hours are reduced at 13,000 small rural post offices and larger urban offices are relocated to inconveniently located annexes.

The list of closures shows that 237 post offices were discontinued during the fiscal year.  Nearly all of them had to have been closed before the moratorium went into effect in December of 2011.  (In other words, between October 1, 2011 and December 15, 2011.)

But yesterday’s list shows something different.  It indicates that 146 offices closed before the moratorium, while 90 closed between December 29 and June 28 — 82 of them during the moratorium itself.

Apparently there may be some errors on yesterday’s closing list.  For example, it shows the post office in Taopi, Minnesota, closed on February 9, 2012, but as this news account indicates, it actually closed on November 18, 2011.

The post office in Megargel, Alabama, which was suspended for unsafe building conditions on February 9, 2011, was formally discontinued on November 18, 2011 (as indicated in the Feb. 9, 2012, Postal Bulletin). On yesterday’s list, however, it is shown as having closed on February 9, 2012.

The post office in Brooklyn, Alabama, was also discontinued on November 18, 2011 (as indicated in the same Postal Bulletin).  It too shows up on yesterday’s list as closed on February 9, 2012.

Then there are the cases where an office was suspended first and subsequently discontinued.  For example, the Nooksack branch of Everson, Washington, was closed for an emergency suspension on May 27, 2011.  That decision was appealed to the PRC, but the case was dismissed because the office had only been suspended, not formally discontinued.

The new closure list shows that the office was discontinued on March 22, 2012, so apparently after the PRC dismissed the case, the Postal Service proceeded with a discontinuance study. No one in Nooksack bothered to appeal a second time around, perhaps because the office had been closed for ten months, or perhaps because the people in Nooksack didn’t even know a discontinuance study was underway, even though there are all sorts of public notices required.

There are currently about 213 post offices under emergency suspensions.  Some 129 were suspended during fiscal year 2012.  Only 9 of them have been reopened; the rest remain in suspension.  None of them has proceeded through a discontinuance study to permanent closure, and it’s hard to say how many are currently being studied for discontinuance.  Judging by the absence of news accounts, not many.

The list provided by the Postal Service does not provide any indication of the cause for the suspension.  Perhaps the PRC will request that information sometime soon.  It would be interesting to see how many of these suspensions were weather related — a lot of offices were suspended due to Irene and Sandy — and how many were due to circumstances more under the control of the Postal Service, like lease and staffing issues.

The list of suspensions may also have some errors.  The post office in Bigelow, Arkansas, for example, is shown as having been suspended on March 31, 2012.  But the Bigelow post office received a discontinuance notice in July 2011, and after an appeal, the PRC affirmed the discontinuance on November 15, 2011.  The only way it could have been suspended in March 2012 would have been if it didn’t close after the appeal was affirmed.  But why suspend a post office that’s already been approved for discontinuance?  In any case, Bigelow now has a Village Post Office.

Last year at this time, we reported that Contract Postal Units (CPUs) and Community Post Offices (CPOs) were closing faster than they were opening.  During fiscal year 2011, the Postal Service opened 144 contract postal units, but it closed 259 of them.  That continued a trend that had been going on for some time.  As CRS reported last year, there were 6,434 CPUs and CPOs in 1971; by 2011, that number had declined to 3,610, a drop of over 43 percent.

That trend line continued in FY 2012.   At the end of the fiscal year, there were 3,073 CPUs and CPOs, for a net loss of 537 for the year.  The Postal Service hasn’t yet provided lists of the offices that opened and closed, but in comparing the lists from last year and this year, it looks as though about 300 new ones were created while about 800 closed.   (As Going Postal has pointed out, however, there are so many errors on the list, those numbers are probably wrong.)

Contract units are much less expensive for the Postal Service to operate than a traditional post office, and many communities are quite happy with their CPUs, but they don’t offer the full range of products and services that a regular USPS-operated post office provides.

They also have other problems, which may explain why their numbers continue to dwindle.  It’s difficult for the USPS personnel in the host post office to do proper oversight since they aren’t there on the premises.  It’s sometimes even a problem collecting all the money that’s due to the Postal Service (as discussed in this OIG report).

Whatever the problems with CPUs and CPOs, they are a lot better than the Village Post Office (VPO), the latest addition to the Postal Service’s contract arrangement.  The VPO offers hardly any products or services, usually just stamps and flat-rate boxes.

The list provided yesterday to the PRC shows that there were 56 VPOs established in fiscal year 2012.  Since the fiscal year ended on September 30, several dozen more VPOs have been set up.  The Postal Service celebrated the hundredth VPO on December 19, 2012, in Linden, Indiana.

When it was originally presented to the public back in the summer of 2011, the VPO was supposed to be a cost-saving replacement for small rural post offices, and the Postal Service was envisioning thousands of them.  Now the Postal Service is talking about creating a few hundred this year, and they aren’t being used to replace post offices but to supplement those that are having their hours reduced under POStPlan.

Before the Postal Service dropped plans to use the VPO as a replacement, it did create a few VPOs when it closed the regular post office.  That’s what happened in Brant, Michigan; Lester, Alabama; Twining, Michigan, and Malone, Washington, the home of the very first VPO.

The Postal Service has also created VPOs in towns where the office has been suspended, such as Cromwell, Kentucky; Lake City, Pennsylvania; Leopold, Indiana; Steptoe, Washington; Tomahawk, Kentucky; West Hartford, Vermont; and Bigelow, Arkansas.  It remains to be seen if these post offices will reopen, or if the VPO will turn out to be a permanent replacement.