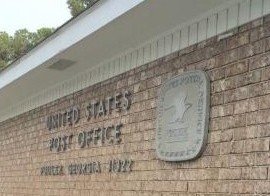 savannahnow.com: For more than 40 years, the Pooler Post Office has sat on the corner of U.S. 80 and Pinewood Drive [in Pooler, GA]. Initially a good size for the surrounding city, the post office has become more than inconvenient as Pooler’s population has exploded to more than 20,000 people.Parking on-site is limited. Lines can be frustratingly long. Pooler Mayor Mike Lamb said some city residents have taken to driving to the post office in nearby Bloomingdale to avoid the hassle.But after about 12 years of petitioning, the mayor said that may finally change.Earlier this month, Lamb received a letter from the U.S. Postal Service’s facilities division, which indicated the agency is considering moving the Pooler post office to a more suitable location.  Read more.