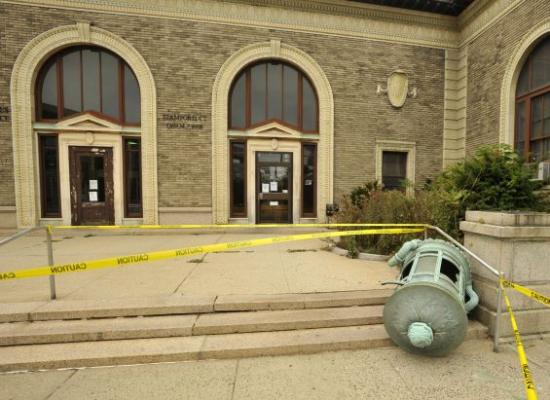 The Postal Service has proposed a revision of federal regulations that would help it avoid going through an extensive environmental review process when disposing of postal properties like post offices.  The Postal Service wants to make things easier because it has many more sales planned for the future.  As the posting in the Federal Register says today, “The Postal Service anticipates that the frequency of property disposals will persist or increase in the foreseeable future.”

In the Interim Rule published today in the Federal Register, the Postal Service requests comments on proposed changes to 39 CFR Part 775, the section of the federal regulations that deals with National Environmental Policy Act Procedures.

The changes may seem relatively minor, and the Postal Service states that it does not believe “the proposed revision should be significant or controversial.”  But nothing could be further from the truth: The proposed changes are extremely significant, and they will be the source of considerable controversy and opposition.

The changes are clearly intended to avoid the kind of problems the Postal Service encountered trying to dispose of the historic post office in Stamford, Connecticut, where the sale was challenged in federal court by the National Post Office Collaborate, the Center for Art and Mindfulness, and a Stamford resident.  That sale was blocked, and it is still being held up, precisely because the court found that the Postal Service had failed to follow its own NEPA requirements.  Now the Postal Service wants to revise the language governing these requirements so that this doesn’t happen again.

At issue in Stamford was how the property would be used after the Postal Service sold the building.  The developer, Louis Cappelli, had announced plans to raze a historic 1939 addition to the post office and build two high-rise buildings on the property and an adjacent property he owns.  (There’s a detailed post about the Stamford post office story here.)

On October 28, 2013, the judge in the Stamford case issued a preliminary injunction stopping the sale.  The court determined that the Postal Service was obligated to consider the potential environmental impacts of this development compared to the impacts of the current use of the property as a post office.  The Postal Service had argued that it should not be required to consider future uses in that way and that there was a “categorical exclusion” that exempted it from the NEPA requirements.  The Court wasn’t buying it.

The Court determined that while the categorical exclusion was subject to a standard “highly deferential” to the federal agency, this does not mean the courts must always defer, especially when the agency has failed to consider an important aspect of the action.

In this case, said the Court, “Even under this deferential standard of review, USPS’s application of the categorical exclusion cannot be squared with common sense….  It strains logic to understand how the construction of two high-rise residential apartment buildings would ‘have generally similar environmental impacts’ as the day-to-day use of the property for an already-constructed post-office.”

In its ruling, the court also made this more general comment: “There is a strong public interest in ensuring that USPS complies with its NEPA obligations here and in any future sales of its other properties.”

The Postal Service clearly wants to avoid having to comply with NEPA obligations in future sales of postal properties.  The main purpose of the revision of the federal regulations it proposed today is to clarify when it can claim a categorical exclusion so that it can claim one in the future, should a sale be challenged as it was in Stamford.

In its case for making the changes, the Postal Service says that it will not claim a categorical exclusion if “extraordinary circumstances exist that could cause the proposed action to have a significant environmental effect.”  But it claims that in most cases, the future use of the property is not much different than the current use so that an Environmental Assessment or Environmental Impact Statement will not be necessary.

The Postal Service says that because it anticipates frequent property disposals in the future, it will “reduce paperwork and delay” if it revises the language on the categorical exclusion so that it is not obligated to prepared an EA or EIS.

In practice, however, complying with NEPA is just a matter of “paperwork and delay.”

Today’s announcement in the Federal Register says that one can submit comments on the proposed revisions on or before February 12, 2014.  For further information about how to submit comments, see the notice.

It would be very helpful if the Postal Service received a lot of comments about why the proposed changes are a very bad idea and why it should not be using the categorical exclusion to avoid doing an extensive environmental impact review when it sells a historic post office, or any other postal property for that matter.

One hopes that the Postal Service will not treat the comments it receives as simply another source of “paperwork and delay.”