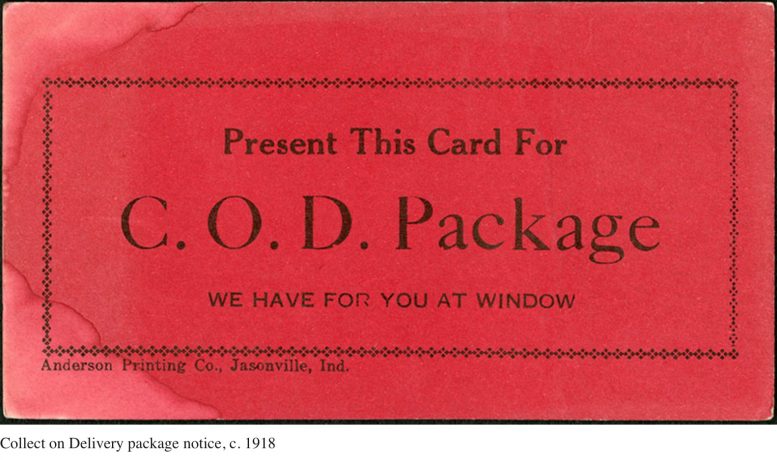 The Postal Service is planning to end COD mail to home addresses.

Under current policy, COD — officially “Collect on Delivery,” aka “cash on delivery” — can be delivered by the carrier to an address (COD per se) or it can be picked up by the customer at the post office, which is officially “Hold For Pick Up” (HFPU).

The home delivery option may soon be eliminated, and all COD mail will be for pick up only.  The restructured service will be named “Collect on Delivery Hold for Pickup” (presumably CODHFPU for short).

If the Postal Service has its way, a service that has been around for over one hundred years will come to an end.

The USPS asks, the PRC defers

In October 2016, the Postal Service filed its notice of annual price adjustments for special services products with the Postal Regulatory Commission. The notice included a proposal to end COD for home delivery.  At the same time, the Postal Service also published a “proposed rule” in the Federal Register “proposing to make Hold For Pickup the only delivery method for Collect on Delivery items.”

Under the new service, COD items would be addressed to the delivery address of the recipient’s post office, and the recipient would receive a notification message to pick up the item at the post office.

The Commission rejected the proposed change in COD because it did not simply involve a price adjustment. Instead, changing COD as proposed was seen as a “significant classification change” and thus outside the scope of the price adjustment docket.

That will not be not the end of the matter. The Postal Service is likely to return to the PRC in 2017 with a request to change COD in an “appropriate proceeding.”

The number of customers who might be affected by such a change to COD is difficult to determine, and the Postal Service provided no numbers in its request to the PRC about how many people actually get home delivery for COD.  As the Public Representative noted in her comments on the rate adjustment, the Postal Service provided “no evidence . . . as to the proportion of COD that is manifested through home delivery.”

Given that total mail volume for 2016 was nearly 158 billion pieces, the volume for COD was obviously relatively small.  And given that total USPS revenue in 2016 was over $71 billion, the $2 million generated by COD (down from about $3.4 million in 2015) was also relatively insignificant.

The Postal Service nonetheless cites saving money as the main reason for  the proposed changes in COD.  As the proposed rule in the Federal Register states, the Postal Service anticipates that this change will eliminate costs “related to obtaining payment from the customer at the time of delivery, redelivery attempts when the customer is not home or does not have the payment available, and the risks inherent in carriers transporting payments back to the Post Office.”

The notice provides no data on these costs or risks.  Considering how small the COD home delivery volume probably is, however, the savings will probably be extremely small as well.

The burden on customers, however, could be significant.

As the Public Representative observes, “The changes will negatively affect those who rely on home delivery and payment together. The changes may fall especially hard on those living in smaller communities that rely on rural carrier service.”

The Public Representative also notes that the Commission, in reviewing the changes to COD,  should consider whether this proposed change is contrary to the policy of “provid[ing] a maximum degree of effective and regular postal services to rural areas, communities, and small towns where post offices are not self-sustaining” [39 U.S.C. § 101(b)].

The Public Representative doesn’t mention it, but another problem is that the post office to which a rural customer may need to travel for COD pick up is likely to be a POStPlan office, open only two, four, or six hours a day.  Picking up a COD order may not be so simple.

The U.S. Post Office Department officially launched Rural Free Delivery in 1896, and for the first time folks in rural areas could share what city dwellers had enjoyed since 1863 —  the convenience of home delivery.

On January 1, 1913, Parcel Post Service was introduced, thus allowing customers, both rural and urban, to send and receive packages without having to travel to a post office.

Six months later, on July 1, 1913, the Post Office Department introduced the collect-on-delivery service.  According to the Postal Museum website, COD increased the quickly growing popularity of Parcel Post, and despite the extra steps and regulations it entailed, COD “was seen as a real benefit to the proliferating mail order business in the country.”

Initially the maximum amount that could be collected was $100, but that amount expanded over the years to its current maximum of $1000.

Thanks to COD, writes the Postal Museum, customers “don’t have to put their wants and wishes completely on hold if they are temporarily strapped for money.  COD, often called cash on delivery, buys the time to scrounge up dollars and cents while the package winds its way through the mail.”

COD can be good for sellers, too. “For the seller,” writes the Postal Museum, “COD means they do not have to extend credit to customers. Indeed, COD gives sellers the assurance they will receive full payment for the items with the post office acting as the financial middleman.”

While the Postal Service clearly wants to change COD to Collect on Delivery Hold for Pickup, the agency does not seem interested in ending the service completely, and in fact in it has recently made several improvements to COD.  For example, as noted in this USPS report to the PRC from last year, businesses can now have payments transferred electronically from the Postal Service to their financial institution soon after the Postal Service receives payment from the customer.

In an era of credit cards and e-commerce, when ordering on Amazon couldn’t be easier, it may seem that COD is a relic of a bygone era. But there are tens of thousands of customers who depend on COD or who simply prefer it to other ways of paying.

COD is a good way for buyers to protect themselves against online scams designed to get their credit card information, and it allows buyers to see the product delivered in good condition before they pay.

Many COD customers also benefit by having the delivery go directly to their door rather than to the post office.  They may not have have a car, or they may be seniors who can’t drive, or perhaps they are among the millions of Americans who don’t have a credit card.  There are more of them than you might think.  According to a 2014 Gallup poll, 29% of Americans do not own any credit cards.

If the Postal Service’s proposal is approved, many of its customers will soon need to find a way to get to the post office to pick up their COD packages.  After over a century, true COD will be a thing of the past.