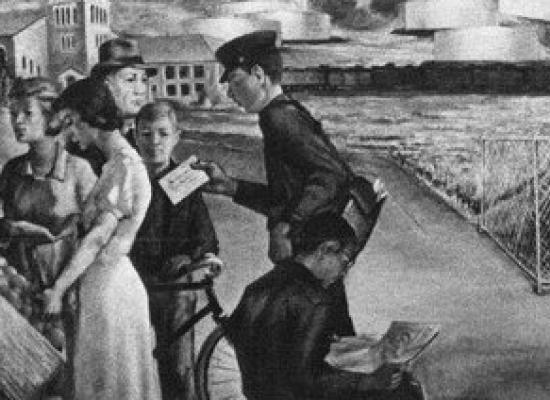 A mural of pre-World War II Richmond, Calif., considered missing for nearly four decades, will once again be put on display.  The painting, an oil on canvas that shows union workers and their supervisors against a backdrop of the Standard Oil Refinery, was commissioned by federal Works Progress Administration in 1940 as a way to employ artists during the Great Depression. (The painting also seems to show a postal worker delivering th email.) It was painted by Victor Arnautoff, a protege of famed Mexican muralist Diego Rivera, and displayed at the central branch of the downtown Richmond Post Office until 1976.  But after it was removed during a remodel, local historians lost track of the artwork. Databases of WPA works classified the mural as "Missing" until an inquisitive historian began asking around and turned to the Richmond Museum of History to assist in the search for the canvas.  Read more.