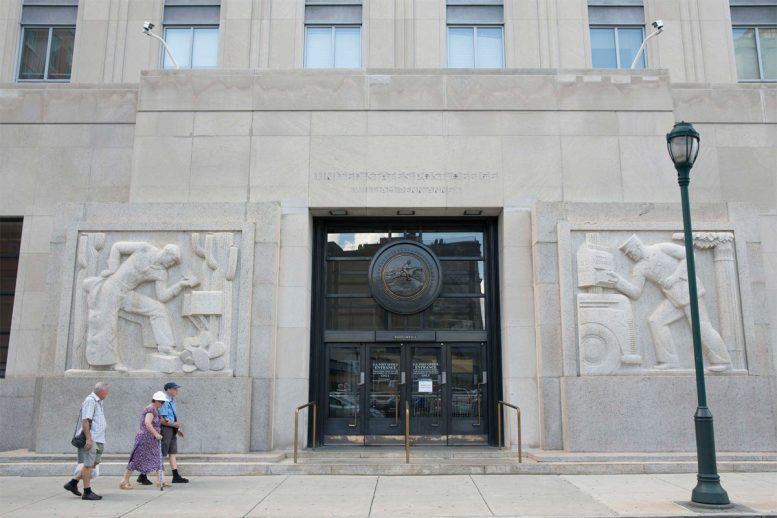 Philly.com: Sure, the lines in the marble-paneled post office at Ninth and Market moved at a glacial pace. Sure, the clerks were often uncommunicative and even surly. But what did it matter when there was so much architectural plenty to keep your eyes sated for the entire wait? Philly once had two great post offices. Soon, it will have none.

The U.S. Postal Service’s decision to close the building’s long, soaring, art moderne retail hall is another reminder that the federal agency’s architectural glory days are coming to an end. Although the branch will be moved to a storefront at 718 Arch St., you can bet the interior decoration will be somewhere between generic and nonexistent.

The Ninth Street branch, known as the William Penn Annex, was one of two monumental post offices built in the city during the 1930s by the Public Works Administration. The federal government was so eager to keep architects and construction workers employed during the Great Depression that it went on a massive building spree. Between 1930 and 1939, the U.S. constructed three times as many post offices as it had built in the previous half-century, 1,861 in all.

Like the William Penn Annex, designed by Harry Sternfeld and Ballinger in 1937, most were simple, classically inspired, limestone-clad boxes ennobled by art deco architectural trim, stylized carvings, and colorful murals. Donald De Lue’s exterior bas-reliefs, which depict mail carriers completing their rounds in all kinds of nasty weather, are its biggest charm.

Most cities were lucky to get one great post office. Philadelphia scored two, William Penn and the Main Post Office at 30th Street. But with the sharp decline in business brought on by the use of email, the postal service has been forced to shed its monumental buildings. In 2008, it closed the 30th Street outpost, a long art deco hall that was even more ornate than William Penn’s, after the mail-sorting facility was sold to a private developer and converted to offices for the IRS.  Read more.