ABC13: In the past two years, Pasadena, Texas, has attracted $2 billion worth of new business to the area, with much of it related to the petrochemical industry.  But in contrast, the city’s downtown area has been likened to a ghost town for much of the last 50 years, which is not necessarily reflective of the boom in business.  Buildings are boarded up where stores once thrived in the original incarnation of downtown.

The Pasadena post office opened in 1939 and later closed. In recent years, though, the building was sold to engineer Javier Morales, who now views it as more than just a piece of property. 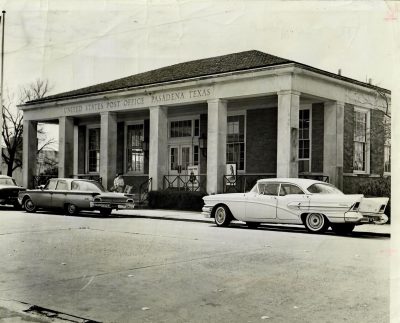 “(The plan is to) revitalize this neighborhood,” Morales said. “The city’s made a commitment, re-doing Shaw Street, and make it a beautiful boulevard, and make it an anchor for years to come.”

Morales’ plans call for restoring the post office building and applying for a historic landmark designation. The mailboxes and vault will be preserved and hold features of his design.

In the middle of surveying the building, he’s found strange pieces of the past as well, including a secret room.

(The Pasadena post office was put up for sale in 2010.  It was apparently going to be turned into a museum — at least the Postal Service identified it as such in a 2012 presentation it gave to the City of Berkeley, when its post office was headed for the chopping block.)