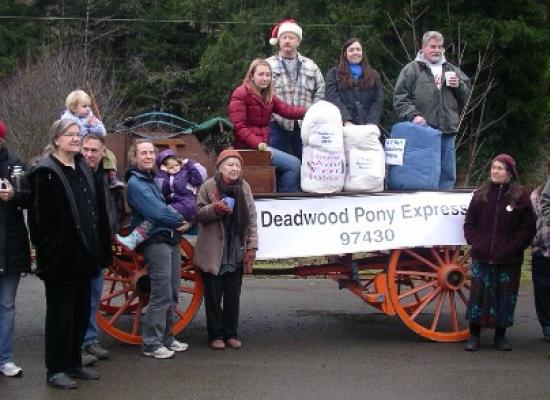 From the Rural Organizing Project:

On Monday, December 19, the Rural Organizing Project coordinated rallies across the state of Oregon to protest the Postal Service’s plan to close rural post offices.  Over twenty-three communities  fought back against Congress' move to privatize the Postal Service for corporate profit.  Monday proved just how much rural Oregon cares about core community infrastructure that supports EVERYONE, not just the 1%.  We sent a clear message: we USE and OCCUPY our Post Offices!

Sign our petition to Congress demanding that they FIX the USPS' financial crisis that they created in 2006 and that they save rural post offices!

Be sure to check your email on January 2: Our January Kitchen Table Activism will be out to collect signatures across Oregon so we can hand-deliver 3,000 signatures to Congress this February!  If you want to get started early, download the petition and signature sheet!

Read about the amazing work of each community — from the tiny town of Deadwood (population less than 200!) with its own Pony Express to signature collection of half of the population in Fort Klamath.  Check out the slideshow featuring pictures from across the state!

Here’s a rundown of what happened on December 19:

Deadwood: The parking lot of Deadwood's Post Office and General Store has never been as full as it was on Monday!  The Deadwood Pony Express — a pair of giant draft horses — pulled into the parking lot from 10 am to noon while 80 locals rallied to save their Post Office!  Everyone in town came, even the local loggers and construction workers.  One local construction worker parked his backhoe in the parking lot and put an "Occupied" sign in the bucket!  Families shared how important the post office is, ate cookies, signed the petition, and gave the Postmaster gifts of appreciation.  At the end of the day, the petition had 164 signatures — an impressive feat for a community with a population less than 200!

"The parking lot was full of folks chatting and meeting for the first time," said Leslie Benscoter, retired schoolteacher and Occupy the Post Office organizer in Deadwood. "Despite our differences, every single member of the community came out to rally around the one thing that brings us together: our post office. I have lived in this community more than fifty years and I still managed to meet new people."

Swisshome: Swisshome rallied outside of their Post Office with a fiddle, signs, and a lot of holiday cheer!  Cheering every time a passing car honked, they happily chatted and collected over 70 signatures.  Swisshome resident and Occupy the Post Office organizer Otan Logi wrote, "A few times, 4-7 neighbors would show up with posters. Cars and trucks passing by honked and the area was alive with people's enthusiasm!  People were talking about concerns with hope and expectation about making a difference."

Walton:The Walton General Store, which shares a storefront with the Walton Post Office, was decorated with signs that read, "OCCUPY THE POST OFFICE — NOT OTHER COUNTRIES" and "Don't Stamp Out the Stamp!"  Walton residents gathered around a bon-fire to hold signs facing Highway 126.  A local pharmacist and concerned Walton resident was there because he isn't physically able to make the drive to the next closest post office. "This is wrong," he said. "I need to get my medications and they are temperature-sensitive. This is really a matter of life-or-death."

Fort Klamath: Fort Klamath locals and Klamath Falls activists worked together to collect signatures from over half of the population of Fort Klamath!  Klamath Falls activist Kirk Oakes wrote, "Fort Klamath was inspirational. Everyone we spoke with was open and concerned and generally supportive. They KNOW what it would mean to them if that post office closed. In the space of time we were there we saw probably half of the population. It was totally worth freezing for."

Drewsey: Drewsey Occupied their Post Office even though it was only 11º outside!  They collected signatures and discussed the importance of the Post Office when it comes to the delivery of prescription medications.  With a population of less than 18, most folks who use the Drewsey Post Office live outside of town and already drive a treacherous road to get there.

Eddyville: Activists from Occupy Newport traveled to Eddyville to support the community which may be losing its post office.  ROP Board member Rennie Ferries wrote, "Just about everybody that drove by showed support in one way or another.  Not a single negative.  All of us left feeling very good about our participation!"  They delivered a plate of cookies to the Postmaster, who was happy to chat with them and share information!

Corvallis: Corvallis had a fun day at Occupy the Post Office. Joined by Santa, Corvallis rallied and gathered over 200 signatures on a petition to save rural and small town post offices.  Everyone reported that the entire event was invigorating, fun, and positive!  Watch the YouTube video, and read the media coverage.

Bend: Bend had fun Occupying their post office with Santa hats and sleigh bells, cookies, and an enlarged printed card to the employees with a poem written by local activist Kim Kambak (included below). All five employees were all smiles, as were the 150 people standing in line!

Scappoose: Over twenty folks from ROP-member group Columbia County Citizens for Human Dignity gathered outside of the Scappoose Post Office with a 4-foot tall Christmas card to postal workers, dozens of cookies, hot cider, and a toy rocking horse deemed the "Pony Express"!  Check out the article in the Spotlight.

Prineville & Powell Butte: Prineville and Powell Butte Post Offices received cookies and cards made with photos taken of their local carriers in their mail trucks from ROP-member group Human Dignity Advocates! The cards featured a poem written by local activist Kim Kambak. Here's a piece of their verse:

Those dedicated carriers bring health, wealth and pills,
Each and every mailbox, their hard-working hands fill.
You do your job without incentives, profit sharing, or perks,
You do it 'cause you're the life blood that keeps rural America at work!
Please accept our humble tidings of thanks,
And know that we support your work through our ranks.
We will write letters, make phone calls, and stand
On street corners, if it takes that, and strike up a band!

Klamath Falls: Several folks from Occupy Klamath Falls congregated outside of the Klamath Falls Post Office on Monday to collect petition signatures and thank-you notes on a big card for the postal employees.  ROP Board member Patrick Vroman wrote, "The Postmaster greatly appreciated the gesture, and said he would make sure all the workers saw it so they could know how appreciated they are."

Cottage Grove: Occupy Cottage Grove and Occupy Eugene had over 20 people out to Occupy the Cottage Grove Post Office.  With santa hats and a decorated Christmas tree, Occupiers collected signatures, high-fives, and friendly conversations with locals.

Salem: Salem Occupied their Post Office and collected over 100 signatures!  Board member Cathy Howell wrote, "One woman who stopped was a retired postal employee from Montana. She said the closings would be really bad in the same ways they are for Oregon — further isolating communities.  Another woman came back, gave me a big hug and thanked all three of us for doing this.  I think the Occupy movement has really gotten people more aware of how corporations are  moving to take over everything — that just seemed to be so on people's lips and minds in dealing with us."