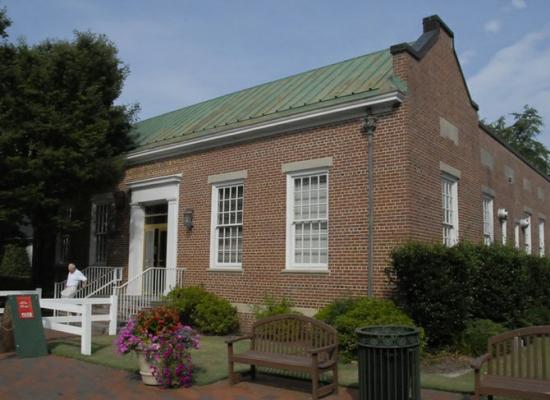 Pinehurst, North Carolina, is a small town located in the south central part of the state in an area called the Sandhills.  It was established in 1895 when James Walker Tufts, a resident of Boston who had build a fortune with the American Soda Fountain Company, purchased land to create a health resort.  He wanted a “first rate” plan, so he hired the best—Frederick Law Olmsted, designer of Central Park in New York City and the Biltmore Estate in Asheville.  (More history here.)

Pinehurst remained a private resort until 1920, and the place is “sacred ground” for golf enthusiasts.  It has hosted the US Open three times, and it is three-time winner of Travel & Leisure Golf Magazine’s Best Golf Resort in America award.  In 1996, the Village of Pinehurst and its resort were given National Landmark status for their significant role in U.S. golf history.

In 1999, Payne Stewart, on a comeback late in his career, sunk a 15-foot putt on the 18th green of the famous #2 and won the U.S. Open, just months before he died in a plane crash at the age of 42.  People still talk about the putt, and there’s a sculpture by Zenos Frudakis of Stewart doing a fist pump after the ball dropped in the hole.  It’s called “One Moment in Time.”

There’s a New Deal post office in downtown Pinehurst, built in 1935.  It will close on Aug. 19, and its operations will be consolidated at the Blake Boulevard location, reports The Pilot this week.

Village Manager Andy Wilkison said in May that the village would do what it could to keep the postal facility open, perhaps by purchasing the building and leasing part to the USPS and part to another business, but it doesn’t look like that will be happening.  Wilkison said that two businesses have expressed interest in the building.  Rumors are the asking price is $695,000.

“Going to the downtown post office is a ritual, a tradition for so many,” said Mayor Ginsey Fallon, “and it’s not going to be the same if they have to go someplace else to get their mail.”

UPDATE: August 20, 2011: The post office did close on Aug. 19, and the community has filed an Appeal with the PRC. Here’s the news item on the closing.