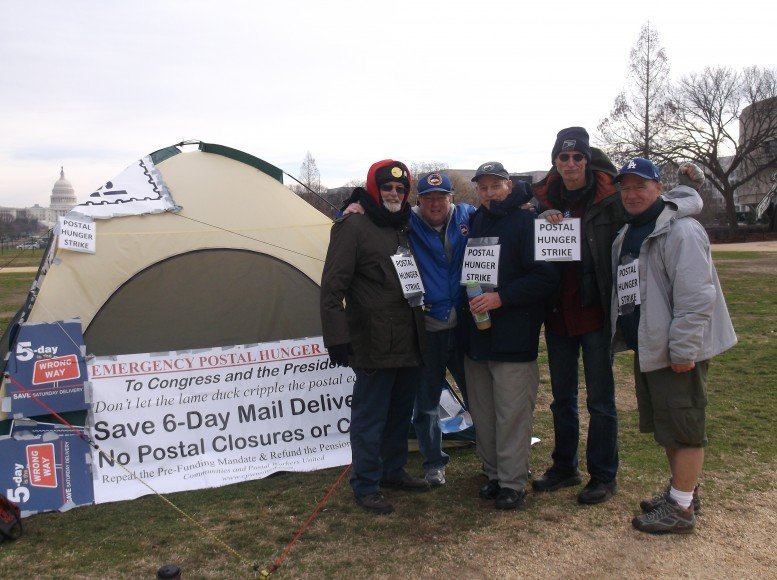 Five postal hunger strikers occupied the office of Representative Darrell Issa Thursday afternoon.  “Issa needs to back off his campaign to wreck the postal service.  We demand that he immediately declare his commitment to preserve six day mail delivery,” said Dave Welsh, hunger striker and retired letter carrier from San Francisco.  Four of the strikers were ejected by Capitol Police while one, John Dennie, a retired mail handler from New York, was arrested.

The strikers have organized a parade and rally for today.  It starts at 3 p.m. at the National Postal Museum, 2 Massachusetts Ave. NE.  The parade will end at the White House, 1600 Pennsylvania Ave. 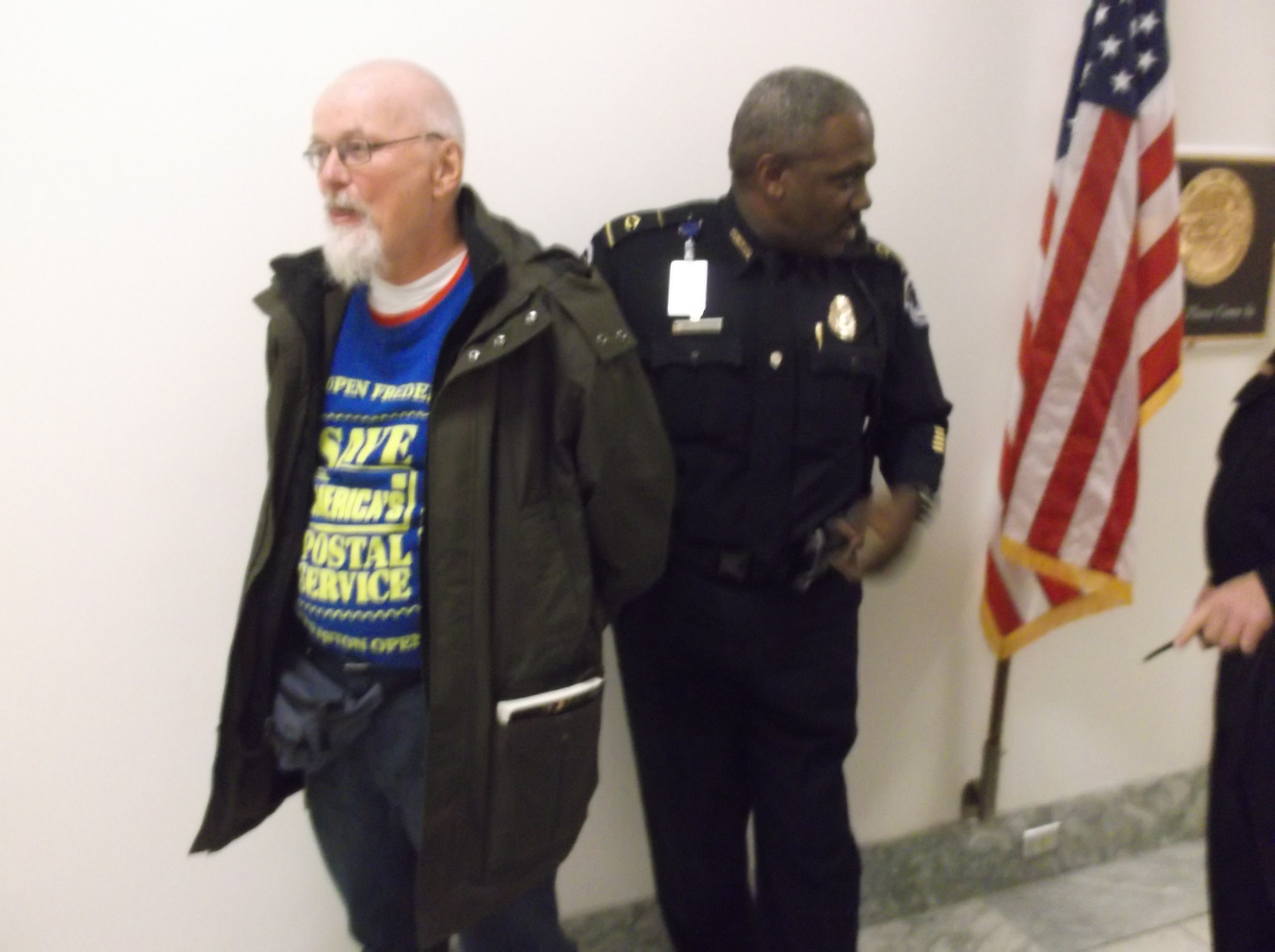 Now going into the fifth day of their hunger strike, the postal workers and their allies established an “emergency” encampment on the National Mall, demanding that Congress and the President halt closures and cuts to the U.S. Postal Service.

“The lame duck is about to cripple the postal eagle and Darrell Issa is the front man,” declared Jamie Partridge, a retired letter carrier returning to Washington, DC from Portland, Oregon for his second postal hunger strike.  Six day mail delivery is on the chopping block, according to Representative  Issa,  Senator Joe Lieberman and Senator Tom Carper who are currently engaged in secret postal reform negotiations.

Friday afternoon, the postal hunger strikers plan to ride a horse and carriage from the Postal Museum, up Pennsylvania Avenue to the White House to celebrate the 237 year history of the postal service and 150 years of Saturday delivery (city free delivery was established 1863).  They plan to deliver a giant postcard calling on Obama to use his veto power to save six day mail delivery.  President Obama has twice allowed for cutting six-day delivery in budget proposals.  “We helped elect Obama and he owes us,” said Ken Lerch, a local letter carriers union president.

Cutting mail delivery to five days will eliminate 80,000 postal jobs, according to postal unions.  The hunger strikers claim the cuts would gut service and send the postal service into a death spiral.  “We will not stand by as our beloved postal service is destroyed,” said Tom Dodge, hunger striker, postal worker from Baltimore, and a coordinator of Communities and Postal Workers United (CPWU).

Last June, ten CPWU activists staged a hunger strike declaring that Congress was starving the postal service.  The activists claim that a 2006 Congressional mandate, which forces the USPS to prefund retiree health benefits 75 years in advance, is bankrupting the service.  Not only would the postal service have been profitable without the mandate, say the strikers, the USPS has also overpaid tens of billions into two pension funds.

“Not the internet, not private competition, not labor costs, not the recession – Congress is responsible for the postal mess” said Kevin Cole, a return hunger striker and postal maintenance worker from California.  “Corporate interests, working through their friends in Congress and the Presidency, want to undermine the USPS, bust the unions then privatize it.”

Strikers call on Postal Board of Governors to fire postmaster general

Postmaster General Patrick Donahoe announced in mid-May that he would close half the mail sorting plants in the country and cut hours from 25 – 75% in half the nation’s post offices, over a two year period.  Thirteen thousand jobs have already been eliminated and delivery standards relaxed.  “Extensive disruption has resulted from these plant closures,” said Dennie.  “We will deliver evidence to the Postal Board of Governors of the PMG’s criminal delay and obstruction of the mail and call for his termination.”   The hunger strikers are calling on postal management to suspend cuts and closures and allow Congress to fix the finances by repealing the prefunding mandate and refunding the pension surplus.