The federal government has a long history, going back to the early nineteenth-century, of constructing buildings intended to symbolize the power, stability, and prosperity of the nation and its government.  Court houses, custom houses, and post offices were designed in the latest styles and using the best technology, and they were supposed to be monumental and grand to inspire confidence in the federal government. In the first decades of the twentieth century, these buildings were done in the neo-classical style, calling to mind the great democracies of Greece and Rome.  As an historian of federal architecture writes, the classical style of federal architecture ““bespoke the power, influence, and self assurance of a nation on the brink of world leadership.”

Among the federal buildings constructed at this time was the post office in Greenwich, Connecticut.  Built in 1916, it features a concave façade facing the triangular Memorial Plaza Park.  This unique adaptation to the site and other architectural features, like a recessed portico and foliated capitals on the columns, put the building on the National Register of Historic Places in 1986, and it’s included in the Greenwich Avenue Historic District.

The Postal Service moved most of the sorting work from this site years ago to a facility on the outskirts of town, which turned the downtown post office into a small branch operation.  As reported in the Greenwich Time, in April of 2009, the USPS announced it was putting the building up for sale. 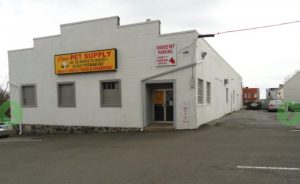 Greenwich Patch reports this week that a buyer has been found—real estate mogul Peter Malkin, owner of the Empire State Building.  And it looks like the old post office is going to be refitted as a clothing store. Local offices say it will be rented by the high-end retailer Bergdorf Goodman.

In the meantime, the USPS has reassured residents that they’re not losing a downtown post office completely.  It will be moving to a new location about a half mile away: a former pet supply storefront.

The post office has a New Deal mural in the lobby entitled “Old Days of Greenwich,” painted in 1939 by Victoria Hutson Huntley.  It depicts Dutch fur traders and pilgrim farmers leaving the dock after loading a ship bound for New York with furs and potatoes.

As Greenwich Time reports, residents have expressed concern about the fate of the mural.  USPS spokesperson Maureen Marion said it could be left in the building if the new owners agree to preserve it, or it could be moved to another location.

“Depending on what the next use of the building is may also dictate how that mural will be handled,” Marion said. “This is one of our treasures, and we do try to take good care of them all.”