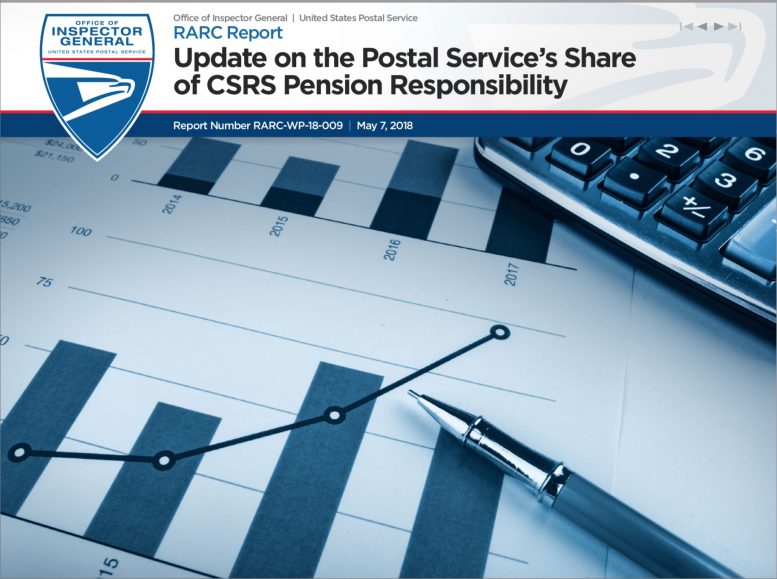 Earlier this week, the USPS Office of Inspector General issued a report on the Postal Service’s share of the Civil Service Retirement System (CSRS) pension responsibility.  The report was prepared in response to a request from Congressman Stephen F. Lynch, and it updates previous reports done by the OIG and Postal Regulatory Commission back in 2010.

The gist of the new OIG report is that the Office of Personnel Management’s (OPM) is using a method to calculate the postal portion of assets within the CSRS that is extremely unfavorable and unfair to the Postal Service.

In other words, the problem of overpayments to the CSRS fund has just gotten worse.  Here’s a chart from the OIG report with the estimates using the three methods: 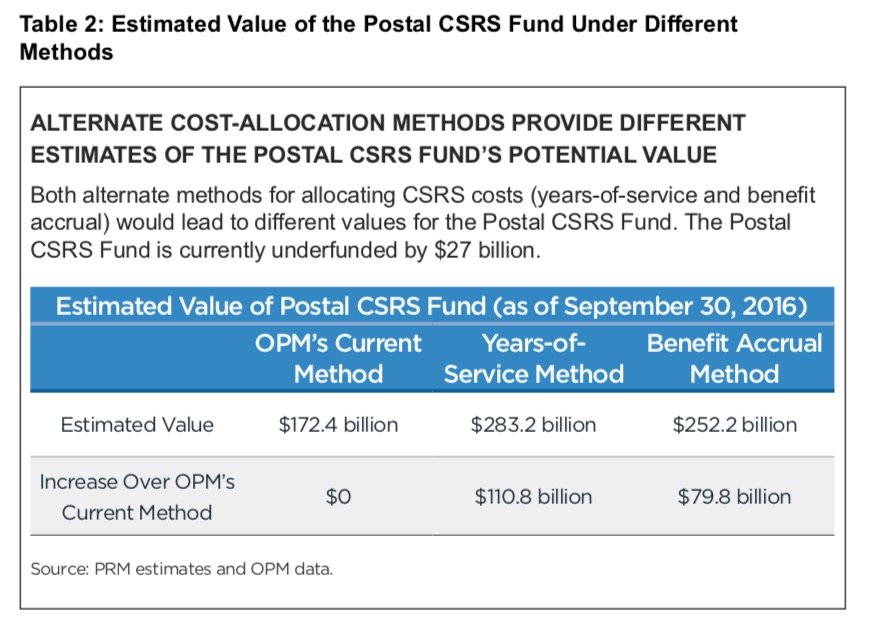 According to the OPM, there’s currently about $172.4 billion of postal assets in the CSRS fund, and the total CSRS obligation is about $200 billion.  If either the OIG or PRC methodologies were used, the unfunded CSRS liability of $27 billion would disappear, and there would be enough money left over to pay off much or all of the liability in the Retiree Health Benefit Fund (about $60 billion).

Congressman Lynch is well aware of all this, and a few years ago he proposed legislation that would have done exactly that — transfer the CSRS overpayments to the RHBF, as both the OIG and PRC had recommended.  Unfortunately, a Republican-controlled Congress ignored his bill.

Given today’s political environment, Lynch’s efforts this time around are not likely to be any more successful.  But thanks to his request, the OIG has produced a report that will be a helpful reminder to the President’s task force on the Postal Service that all the talk of an “unsustainable business model,” “unfunded liabilities” and a “taxpayer bailout” are just, well, fake news.

A brief history of the CSRS dispute

The huge discrepancies between the estimates made by the OPM, PRC, and OIG have to do with the basic assumptions of how the postal assets in the CSRS are calculated.  As explained in this previous post, the history of the dispute goes back to 1971, when the Postal Reorganization Act (PRA) turned the Department of the Post Office into the Postal Service.

That seemed fair enough, but it left one question unanswered: If the Postal Service gave a worker a raise that boosted the pension payments upon retirement, who should be responsible for the higher pension costs, the Postal Service, the Treasury, or both?

In 2010, the USPS OIG issued a report saying that during the four decades since 1971 the OPM had overcharged the Postal Service by $75 billion.  Here’s why.

In order to determine what portions of the pension liability were owed by the Postal Service and by the federal government, the OPM used a “freeze frame” methodology.  The federal government’s share of the CSRS pension costs was based on an employee’s salary of July 1, 1971, which left the Postal Service responsible for all increases in pension costs due to employee pay increases after that date.

The OIG January 2010 white paper proposed an alternative, more equitable methodology that was based on work done by the Hay Group, a global management consulting and actuarial firm.  The OIG described a “years-of-service” method that assigned pension costs in direct proportion to the number of years an employee worked for the Post Office Department and the Postal Service.

There were two issues in the dispute between the OPM and OIG methods, one involving fairness and the other, law.  The OIG and the Hay Group said the freeze-frame methodology was unfair because it was unreasonable and unrealistic to expect that if employees had continued working for the old Department of the Post Office, they would not have gotten pay increases at all over the forty-year period 1971 to 2011.

The legal issue involved the 2003 Postal Pension Reform Act (Public Law 108-18).  According to the OIG’s reading of the Act, this legislation “directed the OPM to abandon the 1974 legislation and use ‘dynamic assumptions’ that include inflation and pay increases.”

Using dynamic assumptions, if an employee worked half his career at the Post Office and half at the Postal Service, the federal government and the Postal Service would each be responsible for 50 percent of the pension obligations.  According to this method for calculating CSRS costs, the Hay Group determined that Postal Service had overpaid the Treasury by $75 billion.

When it presented its case for the overpayments, the OIG did not recommend that the federal government return this $75 billion to the Postal Service.  Instead, the OIG simply suggested that the money could be transferred from the CSRS to the Retiree Health Benefits Fund (RHBF).  That’s pretty much what happened in 2006, after another large surplus was discovered in the CSRS, and the money was transferred to the newly created RHBF as part of the Postal Accountability and Enhancement Act.

A few months after the OIG’s report came out in January 2010, the Postal Regulatory Commission came out with its own report on the issue, based on work by the Segal Group, a consulting firm that specializes in compensation and benefits.  Segal used what’s called the “benefit accrual” method.  It took into consideration the fact that employees earn benefits more slowly during the start of their career and more quickly in later years.  Rather than assigning the federal government’s costs based on the 1971 salary (the OPM’s method), the benefit accrual method assigns the federal government costs based on employees’ actual pay at the end of their career.

The Segal report determined that “a fair and equitable allocation methodology” would show that the Postal Service had overpaid its CSRS pension fund by over $50 billion.  The PRC found that the Segal report “provides a persuasive statement of how generally accepted accounting principles should be used to develop the current postal pension assets.”

Like the OIG, the Commission did not recommend a simple refund of the overpayments back to the Postal Service.  Instead, like the OIG, the PRC suggested that Congress “may wish” to transfer the surplus from the CSRS to the RHBF.

The following chart from this week’s OIG report presents a case study illustrating the differences in the three methods.  (Click on the graphic for a larger version.) 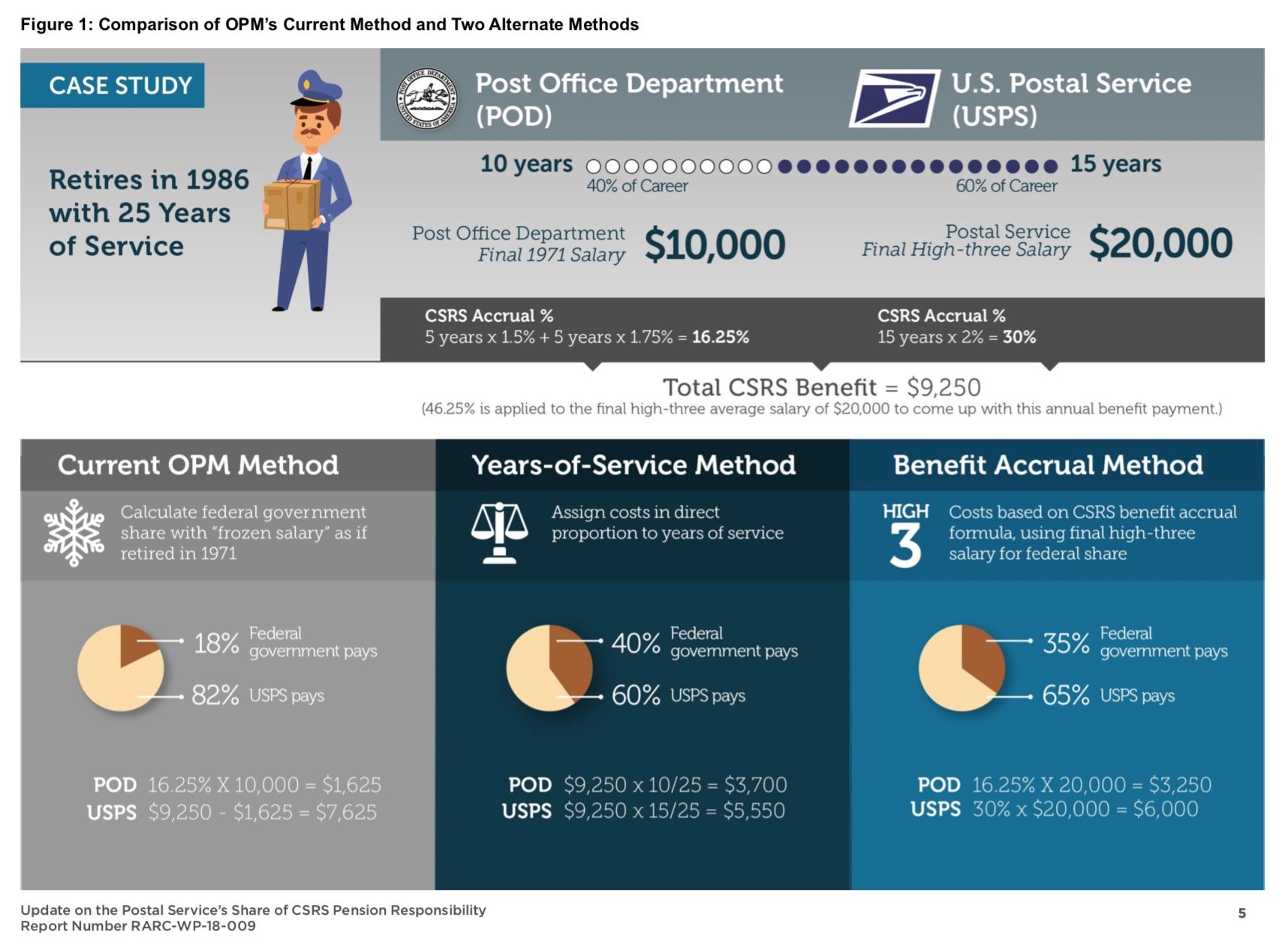 After seeing what the OIG and the PRC had reported, Senators Thomas Carper and Susan Collins and Congressman Stephen Lynch introduced bills to address the problem.  Lynch’s bill (H.R. 5746, “United States Postal Service’s CSRS Obligation Modification Act of 2010”) would have used the OIG-Hay methodology to determine the USPS surplus in the CSRS and credited that amount to the RHBF.   The bill attracted 144 cosponsors, mostly Democrats, but it was opposed by Republicans, led by Darrell Issa, who said it amounted to a “taxpayer bailout.”

In response to the findings of the OIG and PRC, the OPM argued that the overpayment claim amounted to a misinterpretation of the 2003 Pension Reform Act.  In testimony to the House Committee on Oversight and Government Reform (which Issa chaired at the time), John O’Brien of the OPM said his office could find no evidence in the legislative history of the Act or the 2006 PAEA that indicated Congress intended to change the allocation rule.

The OPM’s OIG weighed in as well with this report, saying pretty much the same thing: returning the $75 billion to the Postal Service would shift costs from postal ratepayers to taxpayers.  The GAO subsequently put in its two cents as well, also siding with the OPM.

As might be expected, the postal workers unions and the mailing industry took the side of the OIG and PRC, as explained in this excellent overview of the issue prepared by the National Association of Letter Carriers in 2011.

In its report, the GAO acknowledged that all three methodologies are “reasonable,” so how the costs are allocated is “ultimately a business or policy decision.”  In other words, it was up to Congress to determine which method to use.

While all three methods may be “reasonable,” that doesn’t mean they are all fair.  In the conclusion to this week’s report, the OIG makes just that point.

According to the OIG, the current method used by OPM to divide up the pension costs between the Postal Service and federal government “is disproportionate.”  “Using an alternate method,” the OIG concludes, “could result in a more even division of responsibility for this critical and significant obligation, and could more broadly reflect principles from modern actuarial and accounting standards.”

Who’s bailing out whom?

But of course, that won’t be happening, at least not anytime soon.  Too many powerful interests prefer to see the Postal Service deep in the red.

Some of these interests are opposed to unions, especially large public employee unions, because union workers are usually paid better than non-union workers, which drives up wages for everyone, leading to higher costs for corporations.

Some of these interests are ideologically opposed to government-run entities, and they want to privatize the post office just as they would privatize public schools, the Veterans Administration, Amtrak, and public parklands.  And it’s not just a matter of ideology.  When a government entity is privatized, it’s an opportunity to grab up the valuable pieces.

Congress has put its thumb on the scale against postal workers, small businesses, and average Americans who depend on low-cost postal services.  Actually, it’s more than just a thumb.  It’s an anvil that makes a public postal infrastructure committed to universal service virtually impossible.

We hear all the time about how the unfunded liabilities are going to end with a taxpayer bailout, but the truth is just the opposite.  As this new OIG report shows, the Postal Service has made an unnecessary and unfair transfer of tens of billions of dollars to the U.S. Treasury in the form of CSRS overpayments.