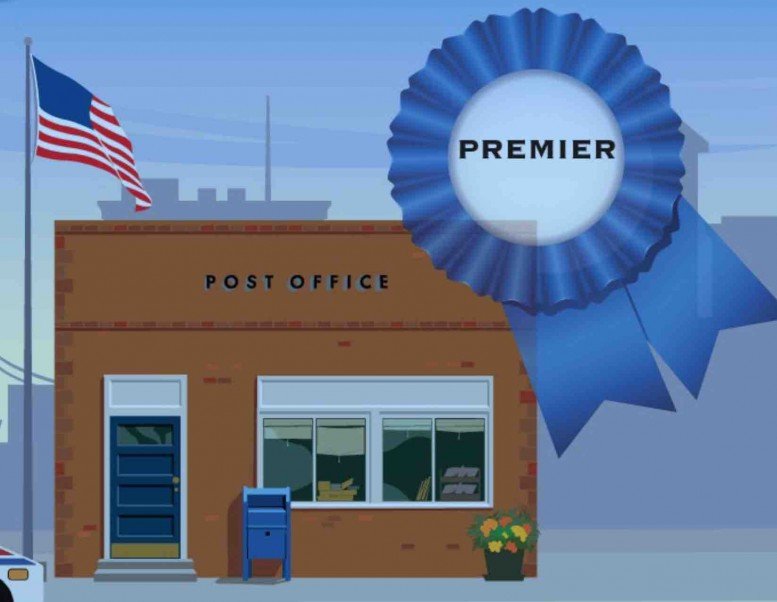 The USPS Office of Inspector General has just released a report about the Premier Post Office program.  According to the OIG, the Postal Service could be doing a better job measuring and evaluating the success of the program.  A lot of the Premier post offices could also be improved in terms of their physical appearance.

The Premier Post Office program was created in 2013 to enhance the customer experience, improve cost efficiency, and maximize revenue at some of the Postal Service’s most successful (i.e., profitable) post offices.

When the program was created, the Postal Service selected 3,088 of its 32,000 post offices to participate, based primarily on revenue but also on geographic location so as to ensure that all areas of the country had access to one of the Premier offices.  (Even with that many Premier offices, there are places in the country that are extremely far from a Premier office, as one can see on this map.)

The OIG says that while the Premier offices represented represent about 10 percent of all post offices, they generated 46 percent of total post office revenue, about $5.2 billion, in FY 2014.

The main conclusion of the OIG’s report is that “the Postal Service lacks a comprehensive methodology for evaluating program performance.”  The Postal Service currently just uses a customer survey.  The OIG recommends using other indicators, like revenue and cost efficiency.

The OIG also visited twenty-four of the Premier post offices and found that “the physical appearance of customer service areas at certain offices was lacking.”  There were many “cosmetic deficiencies” like chipped countertops and broken glass, as well as empty retail displays and litter.

Some managers at these offices did not know that special funds were available to remedy these problems as part of the Premier program.  The OIG therefore also recommended better communication.

The OIG report is about improving the Premier post offices.  It doesn’t address some of the key questions that the program raises, like why the Premier offices get preferential treatment when it comes to new releases of stamps.  (When the Harry Potter stamps came out, they were initially available only at Premier offices.)  Or why some Premier offices are open for special hours, like Veterans’ Day or extended Saturday hours during the Christmas holidays, while thousands of other post offices see their hours reduced.  Or why there’s reason to be concerned about the physical appearance of some offices but not all of them.

The OIG’s new report is here.  A list and map of the Premier offices are here.  The original  USPS source for this list is here.  A previous STPO post about the program from November 2013 is here.