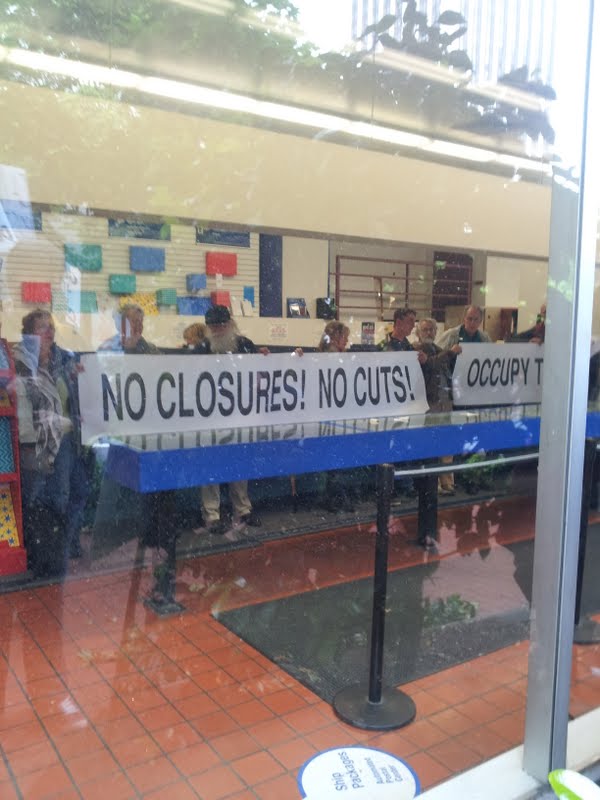 Portland, OR –  Police arrested ten members of labor unions, faith groups, neighborhood organizations, and Occupy Portland who refused to leave the University Station post office at closing time this evening.  Unfurling two ten foot banners, reading “Occupy the Post Office” and “No Closures! No Cuts!” the protesters blocked the closure of the retail window while a rally of over a hundred supporters chanted outside.  Earlier a line of demonstrators had marched through the office, delivering postcards addressed to the Postmaster General.

“The Postmaster General’s plan to close processing plants, delay mail delivery, and cut hours in the nation’s post offices will not fix the postal service’s financial crisis,” said Jamie Partridge, an arrestee from Occupy Portland.  “Congress manufactured the crisis and Congress or the President will fix it.  If the PMG can’t wait, he should step down and allow in someone who will protect the postal service.”

“People from across Portland are coming out to show that we value our public services and we will not allow those services to be sabatoged by corporate interests. Today we defend the Post Offices, but we know that these public services – our Post Offices, our libraries, our parks, and even our schools are all the target of corporate interests profit-driven machines, says Laurie King, organizer with Occupy the Post Office. “We are coming out to say that all communities deserve access to the mail service, and we will not have it handed over to the highest bidder.”

The Postmaster General is poised to close half the nation’s mail processing plants, including Portland’s Main Office, while reducing hours from 25% to 75% at 13,900 post offices. Donahoe is also pushing for an end to door-to-door and Saturday delivery. Organizers say that the financial problems that USPS is experiencing is due to a funding mandate passed by Congress in 2006 that requires the USPS pre-fund retiree health benefits 75 years in advance. This law was a product of ALEC and its Congressional members who focus on shrinking and privatizing public services. Community members are pressuring Congress to pass bills HR 3591 and S 1853 which will repeal the pre-funding mandate and protect the Postal Service.

“USPS is financially sound, the Congressional mandate to pre-pay benefits for 75 years is shackling the Post Office. This is clearly a part of Wall Street’s plan to privatize and destroy an honored institution of our community,” says Lataya Dailey, an organizer with Occupy St Johns. “The Postmaster is complicit in this plan to gut and cut our community Post Offices. We demand he resign immediately.”

This action was part of an on-going effort by a community coalition to support the Postal Service by Occupy St Johns, Occupy Portland, the Rural Organizing Project and Jobs with Justice.

Occupy St Johns and Occupy Portland are part of the international Occupy Movement fighting against the inequality of wealth and power in our existing economic and political systems. Jobs with Justice is coalition of labor organizations and community groups dedicated to protecting the rights of working people and supporting community struggles to build a more just society. JWJ has been an active supporter of public infrastructure like the Post Office since its founding in 1992.