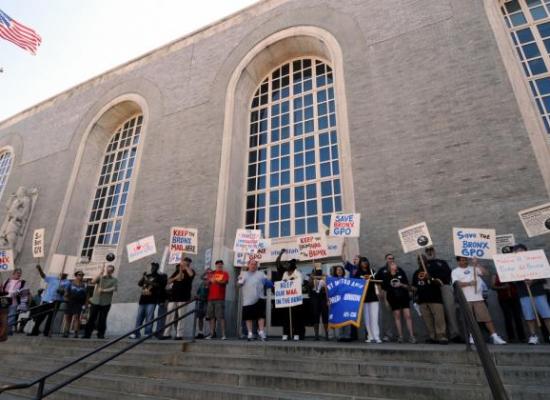 New York Metro Area Postal Union Press Release: New York, NY – January 14, 2014 – When President Jonathan Smith of the New York Metro Area Postal Union learned that the United States Postal Service was going ahead with its plans to sell the historic Bronx GPO, he wanted to know what was the rationale for selling Bronx GPO, while, at the same time, deciding not to sell the Old Chelsea Station post office in Manhattan. Each post office was built in the 1930s in the center of their communities and has remained a vital part of the life of its community for decades. The Bronx GPO is equally or even more important to the people of the Bronx than Old Chelsea Station is to the people of Manhattan’s Chelsea community.

After studying the issue, President Smith has called for a moratorium on the sale of Bronx GPO and for an independent investigation to determine if the economic and racial makeup of the community was the determining factor in the go ahead to sell Bronx GPO.   Read more.