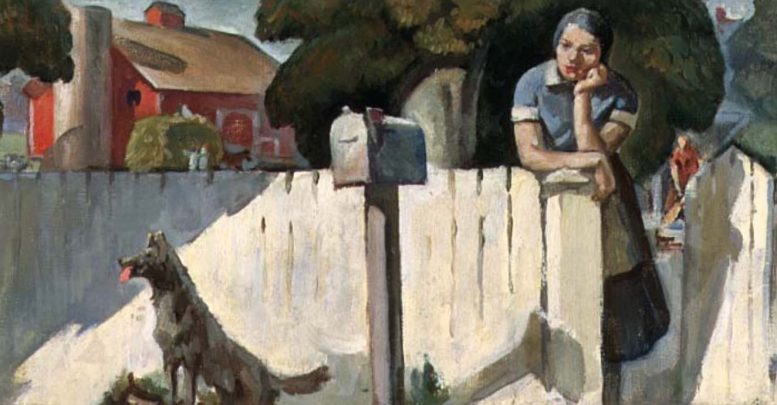 The New Deal also commissioned murals and sculptures for many of these post offices, as well as for libraries, schools and other public buildings.  A thousand post offices in the country “continue to house this uniquely American art for people to enjoy as they go about their daily lives” (US Postal Service website).

As Marlene Park and Gerald Markowitz write in Democratic Vistas: Post Office and Public Art in the New Deal, “The New Deal sought to make the national government’s presence felt in even the smallest, most remote communities. . .   The post office was ‘the one concrete link between every community of individuals and the Federal government’ that funtioned ‘importantly in the human structure of the community.'”  The post office “brought to the locality a symbol of government efficiency, permanence, service, and even culture.”

The US Postal Service is dismantling the institution of the community post office and the rich legacy of the New Deal.  The USPS has announced that it will be closing as many as 2,000 of its 32,000 post offices and auctioning off the buildings.  As of May 2011, about 200 post offices have found themselves on the closing list,  Many of them, like the Century Post Office in Raleigh, are significant historic buildings.  At least 12 of them were built by the New Deal.

At this rate, something like 120 historic New Deal post offices could be closed and sold.  They will be converted to real estate offices, retail showrooms, and restaurants.  Most are not likely to remain public spaces, and they will certainly not continue to remind citizens of their link to the federal government.  Moreover, while they are almost all located in downtown areas and serve people on foot, their services will usually be consolidated to annexes and office parks on the outskirts of town and require a car.

The director of the Smithsonian’s National Postal Museum once said that the New Deal murals “constitute a great national treasure . . . and the buiidings that house these works represent a vaulable and important American asset” (quoted in Preserving the People’s Post Office by Christopher Shaw).  It’s one thing to close a small, underutilized, retail post-office outlet in a shopping mall, but closing downtown post offices and selling off valuable architectural resources that belong to the public is a shame, and it shouldn’t be happening.

Below are stories about some of the New Deal post offices that have already closed or that may be closed and sold off.