The New York Times has an opinion forum today with six contributors weighing in on the Postal Service’s plan to eliminate next-day delivery for first-class mail.  One of the contributors is yours truly, Steve Hutkins of “Save the Post Office,” so many thanks to the Times and editor Katy Roberts for the opportunity to tell a different story about what’s going on.  You can see the piece here, and there’s an excellent contribution from Frederic V. Rolando, president of the National Association of Letter Carriers, here.

Accompanying my piece is a graphic that shows just how badly mail volumes are dropping.  The graphic seems to challenge my main point — the “crisis” of the Postal Service is a “manufactured emergency.”  So let’s take a look at the chart.  (Click on it to enlarge, and click to return.)

The top line shows that “the great bulk of postal volume” was “in decline even before the recession.”   True, total volumes did decline a slight amount before the recession — there were 213 billion pieces in 2006, and 212.2 billion in 2007.  But the dramatic fall begins in 2008, when volumes dropped to 202.7 billion, and they dropped even more precipitously in 2009, to 177.1 billion.  (The recession officially began in December 2007.)

Note that both total volume and standard mail volume are actually still up for the decade (10% and 17% respectively).  Yet the number of postal workers handling all that mail has decreased dramatically since 2000.  Back then, there were over 900,000 postal employees; by 2010, the workforce had been reduced to about 672,000.  The Postal Service wants to cut it down to 425,000 by 2015.

The next line in the graphic is for total first-class mail, and the Times writes, “This continues to erode, as people turn to electronic means to pay bills and writer letters.  About 15% of advertising mail is sent first class — that, too, is falling.”

The fourth line in the chart shows something called “first-class mail: transactions,” and it’s about paying bills online.  That’s down 3% over ten years — hardly anything to get alarmed about.

And finally, there’s a line showing the steady decline in personal first-class mail, down 31% since 2000.  As the graphic shows, this decline has been very steady, about 3% a year, or as the Times prefers to say, it’s “shrinking relentlessly.”  This is clearly about “electronic divergence” to the Internet and not the recession, but there’s nothing new about this problem, and it’s hardly an emergency that calls for draconian cuts.  It’s a long-term, gradual, systemic problem that calls for long-term, gradual changes — perhaps gradual downsizing, but preferably alternatives, like giving the Postal Service the ability to develop new products and services to make up for the lost revenue.

The theme of the chart is that mail volumes are declining dramatically, so there really is a “crisis” and my point in the article that it’s “manufactured” is simply wrong.  But the lines show that the steep declines in volume occurred in conjunction with the recession.  That’s the real crisis, and the Postal Service and others are using it to justify changes to the postal system that people have wanted to make for a long time — long before the recession.

The following chart shows quarterly changes in total mail volume (by percent) since 1989.  As you can see, there are always ups and downs, but the three the periods with steep declines were all associated with recessions (the gray bars).  The “Great Recession” of 2008-2009 caused the steepest decline of all, by far: 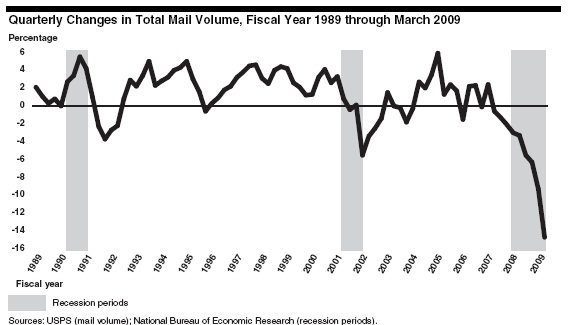 If you want more evidence that it’s the recession that is driving the downturn in mail volumes and revenues, you need look no further than the Postal Service’s own analysis.  In its request to the Postal Regulatory Commission for an exigent rate increase (an increase in postage that goes beyond the rate of inflation), the Postal Service needed to differentiate between revenue lost “due to” the recession and declines associated with “electronic divergence.”  That’s because the PRC would only consider an increase that was caused by “extraordinary circumstances” like a recession.  Declines associated with the Internet are not extraordinary and don’t justify the rate increase.

In its case to the PRC, the Postal Service has argued that the declines “due to” the recession during 2008 – 2009 are somewhere between two-thirds and 97%, and much of the decline since 2009 is likewise associated with the economy.  Moreover, the recession is itself causing more divergence to the Internet (it’s a cheaper way to advertise, for example).

It’s easy to make the case that the Postal Service faces a crisis because everyone is using the Internet.  Most people who are reading this now are probably also using their computer more than ever, maybe paying bills online, and doing Facebook and whatever else.  But as the Times reported in a very good article on “the Digital Divide” a few days ago, a large number of people are too poor to hook up to broadband, and these people still depend on the mail system.  Plus, advertisers get better results from hard-copy direct mail than through online ads and phone solicitation, so from the Postal Service’s point of view, they’re not going anywhere.  The whole story about how the Internet is responsible for the steep declines in the mail is just another part of the “crisis” narrative.

Given that the economic problems are cyclical and not permanent, what sense is there in closing down thousands of post offices that have been serving their towns and neighborhoods for a hundred or a hundred-and-fifty years?  (It won’t even save much money.)  And why close processing plants and lay off over a hundred thousand workers?  That may be what a private corporation would do to please its stockholders, but the Postal Service is not a private corporation, and it doesn’t have to show a profit.  Shedding jobs isn’t going to help the economy one bit, and it’s going to inflict a lot of hurt on families and communities.

If the Postal Service has its way, we’re all going to suffer in the end.  We’ll see the Postal Service downsized by half, then cut up into pieces that can be manageably taken over by private corporations.  (Another contributor to the Times Forum discusses the path toward privatization in Canada.)  The price of postage will rise to levels seen in other countries where this has happened, the quality of service will decline (as we’re already seeing in the proposal to slow down first-class mail), and you’ll be doing your postal business, as one of the other contributors to the Forum recommends, in Wal-Mart or the supermarket.

That may be fine with the majority of Americans, but it’s happening without anyone voting on it.  Most likely, the powers-that-be wouldn’t want that vote to take place, however, since they know what the results would be.  That’s why they’re using a different strategy — manufacturing a crisis so people can’t think straight, so they feel like they don’t even have time to think at all.