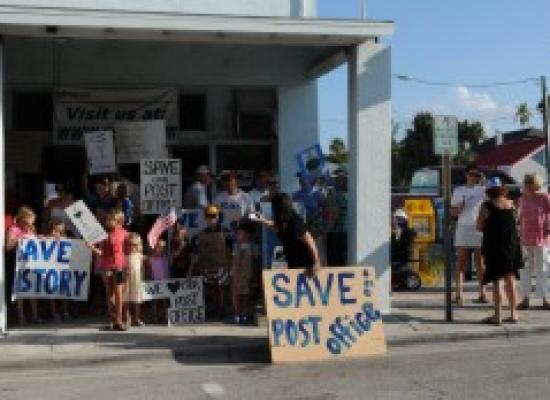 Maybe it’s time for a moratorium on post office closures, consolidations, and suspensions.  The Postal Service seems to be closing post offices as fast as it can, and communities barely have time to react.  Many have had a post office for over a hundred years, yet they’re given just 60 days to respond to a closure notice.  With emergency suspensions, the study for discontuance takes place after the post office has closed, often with just 24 hours notice.  And when communities protest at public meetings, representatives of the Postal Service don’t seem to listen.  It’s as if the decision has already been made—and it probably has been.  An Advisory Opinion issued by the Postal Regulatory Commission in 2009 said, " the Commission finds that the Postal Service should improve customers' opportunity to offer input. . .  [P]ublic comments often are not sought until after the initial decision to close the facility has already been made." We need a much more thoughtful national discussion about the meaning of universal service and the financial issues facing the Postal Service.  And while we’re having that conversation, the Postal Service should stop closing post offices.  It’s time for a moratorium on closings.  Don’t think it’s possible?

There’s nothing radical about moratoriums on closures.  There have been two moratoriums on post office closings since the Postal Reorganization Act of 1970.

In 1975, a GAO report recommending the closure and consolidation of 12,000 rural post offices led to a "storm of reaction," Congressional hearings, and the passage of the Postal Reorganization Act Amendments.  The Act established a commission to study the postal service and imposed a moratorium on closing or consolidating any post office until the commission published its findings.  That moratorium was in effect from September 1976 until March 1977.

In 1998, under congressional pressure, the Postmaster General declared a moratorium on closures and consolidations, and it was in place until 2003.  As a recent report by the Office of Inspector General explains, the reason for this self-imposed moratorium was "suspicion in Congress that the Postal Service was manipulating the emergency suspension procedure," which was the subject of a 1999 congressional hearing.

It’s Congress that is ultimately responsible for ensuring that the postal system provide “universal service.”  When the Postal Reorganization Act of 1970 transformed the postal system from a government service into a corporate-type independent agency, Congress wanted to ensure that the postal system continued to provide effective postal services to residents of both urban and rural communities. In 1996 Congress amended the Act and established specific requirements for closing a post office to ensure that the USPS consider the effects on the community as well as providing and involving communities in the decision, thus ensuring that closure decisions were made in a fair, consistent manner.  While the nation debates the future of the postal system, it only makes sense that the USPS put a moratorium, as it did back in 1998, on closing hundreds, perhaps thousands, of post offices.