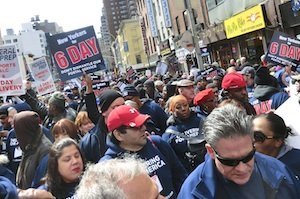 The Postal Service is under siege — New York City post offices put up for sale, Postmaster Donahoe’s failed attempt to cutback mail delivery to five days, and the rush to close mail processing plants throughout the nation.

These cutbacks in services have the biggest impact on people who most depend upon the post office — the elderly, the disabled, disabled veterans, the poor, and small business owners.   The cutbacks must be stopped.

Join the May Day March to Save the People’s Post Office on Wednesday, May 1.

The March will culminate in a “mail-in” at the Peter Stuyvesant Post Office, with marchers “occupying” the lobby as they attempt to mail oversized “post cards” to government officials who have the authority to reverse the disastrous dismantling of the people’s post office.

What:  May Day March to Save the Peoples’ Post Office

Why:   Enough is Enough! There must be an immediate moratorium on the destruction of the infrastructure and network of the people’s post office.