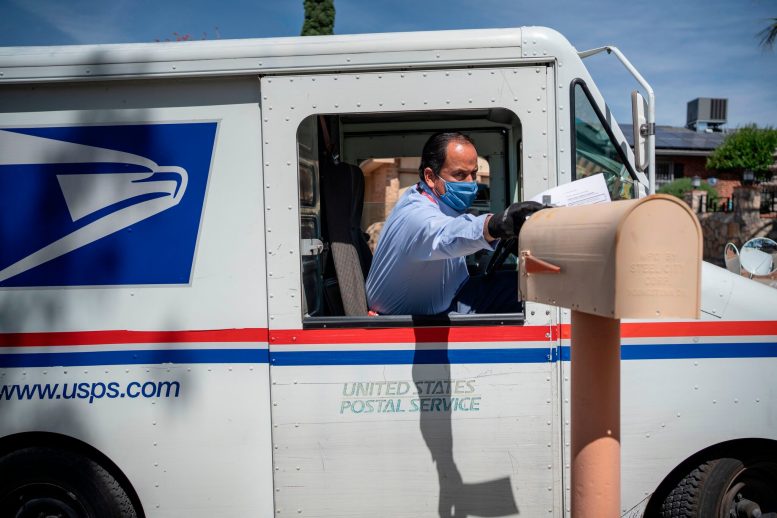 New York Times: Welcome to the next election battleground: the post office.

President Trump’s yearslong assault on the Postal Service and his increasingly dire warnings about the dangers of voting by mail are colliding as the presidential campaign enters its final months. The result has been to generate new concerns about how he could influence an election conducted during a pandemic in which greater-than-ever numbers of voters will submit their ballots by mail.

In tweet after all-caps tweet, Mr. Trump has warned that allowing people to vote by mail will result in a “CORRUPT ELECTION” that will “LEAD TO THE END OF OUR GREAT REPUBLICAN PARTY” and become the “SCANDAL OF OUR TIMES.” He has predicted that children will steal ballots out of mailboxes. On Thursday, he dangled the idea of delaying the election instead.

Members of Congress and state officials in both parties rejected the president’s suggestion and his claim that mail-in ballots would result in widespread fraud. But they are warning that a huge wave of ballots could overwhelm mail carriers unless the Postal Service, in financial difficulty for years, receives emergency funding that Republicans are blocking during negotiations over another pandemic relief bill.

At the same time, the mail system is being undercut in ways set in motion by Mr. Trump. Fueled by animus for Jeff Bezos, the founder of Amazon, and surrounded by advisers who have long called for privatizing the post office, Mr. Trump and his appointees have begun taking cost-cutting steps that appear to have led to slower and less reliable delivery.

In recent weeks, at the direction of a Trump campaign megadonor who was recently named the postmaster general, the service has stopped paying mail carriers and clerks the overtime necessary to ensure that deliveries can be completed each day. That and other changes have led to reports of letters and packages being delayed by as many as several days.

Voting rights groups say it is a recipe for disaster.

“We have an underfunded state and local election system and a deliberate slowdown in the Postal Service,” said Wendy Fields, the executive director of the Democracy Initiative, a coalition of voting and civil rights groups. She said the president was “deliberately orchestrating suppression and using the post office as a tool to do it.”

Kim Wyman, the Republican secretary of state in Washington, one of five states where mail-in balloting is universal, said Wednesday on NPR’s “1A” program that “election officials are very concerned, if the post office is reducing service, that we will be able to get ballots to people in time.”

During his eulogy on Thursday for Representative John Lewis, former President Barack Obama lamented what he said was a continuing effort to attack voting rights “with surgical precision, even undermining the Postal Service in the run-up to an election that is going to be dependent on mailed-in ballots so people don’t get sick.”  Read more.