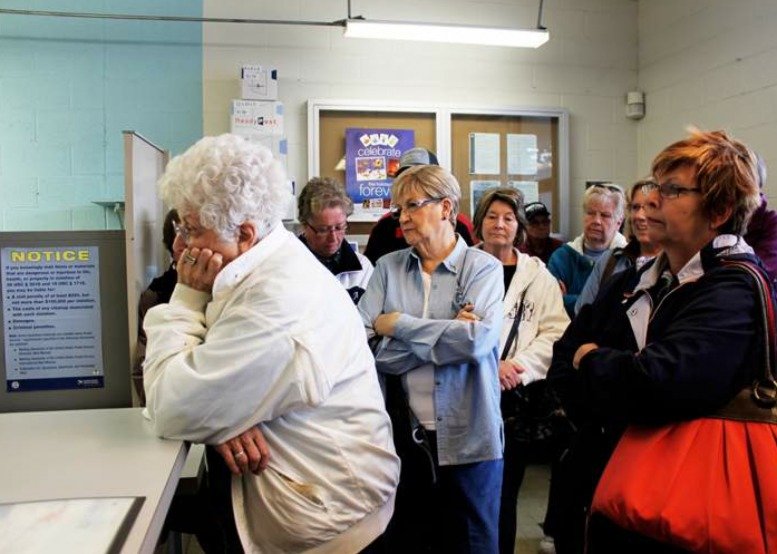 The Postal Service is plowing ahead with its community meetings on POStPlan.  As of Friday, it had held 6,741 meetings, and it has scheduled an additional 474 through March 15.

That’s a total of 7,215 meetings — well more than half the list of 13,000 post offices that are seeing their hours reduced.  Before last week, implementation was complete at about 2,800 post offices.  On Saturday, another 737 joined the list, bringing the total number of post offices that have seen their hours reduced to over 3,500.   (The weekly meeting lists are posted on the USPS website here; you can see the entire list as a table here and spreadsheet here.  The implementation dates can be found here and here.)

Not that the meetings have lasted very long.  There’s not much to talk about.  The decision to reduce the hours was made almost a year ago, and what the new hours will be comes as an announcement, not a matter for discussion.  There’s no need for a lot of talk about the options because there aren’t any.  It’s either reduce the hours or close the post office.

The meetings are really just an opportunity for the Postal Service spokesperson to drive home the point that the agency is losing $25 million a day and billions every year so it must make cuts in service like reducing the hours.

The local newspaper dutifully repeats what the Postal Service has said.  In most articles, there’s also a quote or two from citizens saying they’re concerned about how reducing the hours will hurt some members of the community but it’s better than losing the post office altogether.  The headlines say that the post office has been “spared” or “saved” or “will stay open” — as if closing it were really a possibility, even though virtually none of the 13,000 POStPlan post offices will close.

When the Postal Service witness for POStPlan, Jeffrey Day, was questioned by the Postal Regulatory Commission for its advisory opinion on POStPlan, he testified that while post offices would be reviewed annually to see if they needed to be upgraded or downgraded based on their revenues and workload, the meetings would not be repeated because “community meetings are very expensive.”  When asked how much the Postal Service had budgeted for the surveys and meetings, he said he “didn’t have that number offhand,” and he couldn’t even say if it was in the millions of dollars. 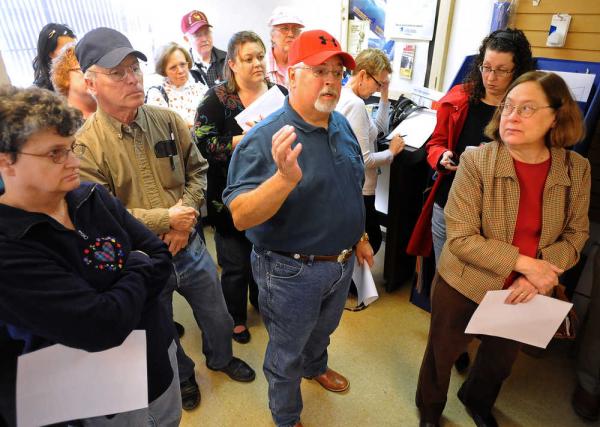 One wonders how much money the Postal Service has spent on these seven thousand meetings (with another six thousand to go).  Whatever they cost, it was a waste of money, at least in terms of getting feedback from citizens.  The outcome never depended on surveys and meetings.  The decisions were made in postal headquarters long before an average American weighed in.

But that’s not what the meetings are about.  They are a publicity strategy to make it seem that the Postal Service is “listening” to its customers.  (The page on the USPS website about the POStPlan meetings is titled “We’re listening.”)

Even more, the meetings serve as a staged public relations event designed to get a message out: The Postal Service is hemorrhaging  billions, and the public must endure cuts in service if the agency is to survive.

The meetings go hand in hand with the Postmaster General’s trip to Montana last May — a publicity tour to show he was “listening” to people in small towns who were concerned about their post office closing.  (At the time, the PMG had already decided not to close post offices and to do POStPlan instead.)

The Postal Service has been doing a great job controlling the message.  We hear constantly about how everyone is using the the Internet and email, how declining mail volumes are pushing the agency deeper and deeper in debt, and how management has no choice but to reduce costs by whatever means necessary — closing plants and slowing down the mail, ending Saturday delivery, shifting over to cluster boxes, cutting hours at the post office.

We don’t hear anything about the possibility that these service cutbacks are actually about keeping postal rates down for large business mailers and dismantling the country’s postal system so that corporate interests can grab a bigger piece of the pie.

When you consider how much it would have cost to place ads in thousands of community newspapers and on hundreds of local TV channels, the Postal Service has probably found a bargain.  Whatever they cost to hold, the POStPlan meetings have provided great free publicity.  They were a perfect way to control the message.  And that’s probably what postal management was thinking when it decided to hold them.