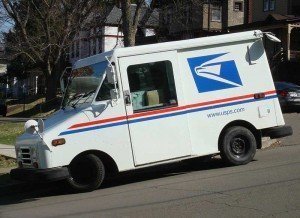 The Postal Service keeps talking about how it needs to act “like a business,” and that’s why it wants to “optimize” the retail network and “optimize” the workforce by closing thousands of post offices and putting hundreds of thousands out of work.  But what kind of business would treat its customers and employees this way?

What kind of a business would make changes that are going to seriously erode customer goodwill and the quality of service?  Cutting Saturday delivery, for example, or slowing down the delivery of the mail.   The USPS Office of Inspector General (OIG) has commissioned a study designed to support the idea that cheaper postage is better than fast delivery.  Trying to get first-class mail delivered in one-to-three days means processing plants have to run through the night and on Sundays. But the OIG’s report says “some of the Postal Service’s largest business mailers have stated they value consistency over high speed and would tolerate slightly slower service to save costs.”  So the Postal Service is going to “relax” its service standards to keep its big customers happy, and the heck with the rest of us.

What kind of a business would treat injured and disabled employees the way the Postal Service does?  The Postal Service has a program called the “National Reassessment Program.”  Its purpose is to shed workers who are injured or disabled, and there are complaints that it does so in a heartless, aggressive way.  According to several postal workers, if you have a health problem, you’re basically just sent home without pay or pushed into disability retirement.  The unions spend a lot of time helping injured and disabled workers who’ve been tossed out on the street, many of them disabled vets.  The NRP has even provoked a class-action lawsuit on behalf of thousands of injured employees.

What kind of a business would say it needs to cut the workforce by 220,000 employees, and then put ads online looking to hire new workers?  If you don’t believe that, go to the USPS “Careers,” website and search for jobs.  You’ll get a long list of openings that looks like this:

The catch is that most of these positions are “casual,” “temporary,” “transitional,” “relief,” and “contractual.”   The terminology of USPS jobs is byzantine (PMR, PSE, etc.), but it’s not hard to see that these new positions are almost all non-career lines.  The Postal Service wants to lay off employees who have worked for the post office for ten or twenty years, people who have given their lives to the post office, and it wants to replace them with new workers who have very little experience or commitment to the post office, and who will receive very little in job security, benefits, and salaries.

In order to reach its goal, the Postal Service is going to have to shed even more than the 220,000 career employees it’s been talking about.  Here’s why (the data comes from this report prepared for Congress): 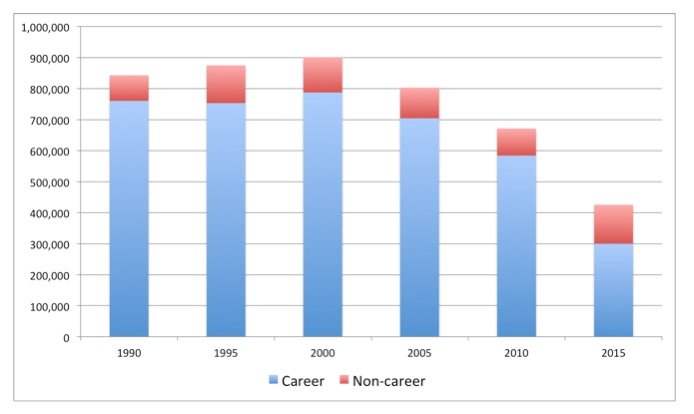 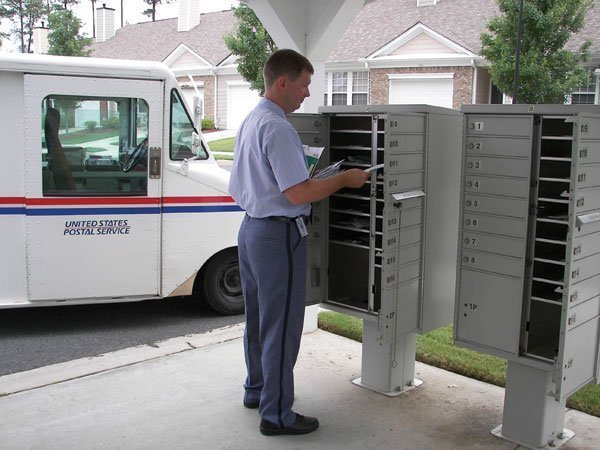 A few days ago, someone posted a comment in the Federal Daily saying he was being hired as a clerk on the Postal Support Employee (PSE) line, and he said, “it seems kind of like a rushed hiring process.”  The person wonders what is going on: “what I don’t get is why are they in a rush to hire when there are so many post offices closing. I’m scared that if I take the position, next month or so a displaced career employee will come take my spot.”

Actually, that fellow shouldn’t be worrying about a displaced career employee taking the spot — the Postal Service wants to get rid of that career employee for good, not find him or her another spot.

If the Postal Service wanted to look for a kinder, gentler way to reduce its workforce, it wouldn’t be hard to find one.  There are many thousands of postal workers ready and able to retire, but they’re hanging on to the job thinking the USPS is going to make them a great offer any day now.  But, aside from a few offices in places like California, there have been very few offers for Voluntary Early Retirement (VER), and they haven't been big enough to attract many workers.  Managers, for example, making over $100,000 a year have been offered $20,000 as an incentive.  No surprise there haven't been many takers.  Some union workers were offered $15,000 back in 2009, but only 21,000 took advantage of it.

One reason the Postal Service hasn't done everything it could to encourage early retirement is that offering thousands of workers large financial inducements to retire would get expensive.  It's much cheaper just to lay them off or to push them into quitting.  Like the worker whose processing facility is consolidated with one two hours away —  will he do the long, expensive commmute, or sell the house and move the family, or just quit?  That's called "attrition." But there's a bigger reason the Postal Service isn't all that interested in helping people retire.  Going after the no-layoff protection in the union contracts will weaken the unions, and that makes it a win-win for the Postal Service — save money and hurt unions.

With the way things are going, it looks like the Postal Service will need to revise the text on the USPS Career website.  There’s a page entitled, “Let’s Talk — How We Value Our Employees.”  The title obviously needs to go, but they'll also need to work on the sections about “Accessible Leadership” and “Work Environment Based on Trust and Integrity” — not enough of that around these days.

Plus, the paragraph on “Premium Benefits” will need some changes.  Right now it reads: “Security in quality benefits is important in any employment.  As an independent agency of the federal government, the Postal Service affords all of the retirement and health benefits affiliated with government employment, as well as other premium benefits.”  If the Postal Service pulls out of these federal programs, the benefits aren't going to be worth bragging about.

So how much does the Postal Service really value its employees? The "Let's talk" website is just talk.

And what kind of a business would do what the Postal Service is doing?  Not one that plans on being around for a while.