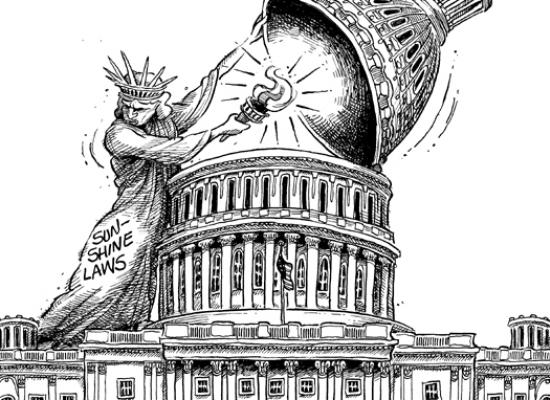 Bravo to the Postal Service.  Finally something for which it can be congratulated — a new "open door" policy on video and audio taping of town meetings on post office closures.  Not that it had much choice in the matter.  Prohibiting people form recording the meetings would not have sat well with Congress, the Postal Regulatory Commission, the news media, and the public.  It took a couple of weeks, but the decision was obviously the right one.

On October 7, Ruth Goldway, Chairman of the PRC, sent a formal request to the Postal Service inquiring whether it was "standard Postal Service practice to prohibit audio recordings, video recordings or still photographs from being taken at community meetings," and if so, to provide details about the rationale.

Apparently the PRC had heard tales of citizens being told by USPS officials running the meetings that the public was not permitted to video or audio tape the meetings, and indeed the Postal Service was able to confirm  "fourteen instances where some restriction was imposed."  These included several discontinuance meetings in Missouri, Mississippi, and Pennsylvania, as well as one in Dewitt, Kentucky, which seems to have been taped anyway by the local news media.

(By the way, the Postal Service can add to this list of places where the public was denied the opportunity to record the meeting, this example of what happened in Still Pond, Maryland, back in March, as reported for the Kent County News by Craig O'Donnell.)

Today the Postal Service replied to Goldway's information request.  The response states that Postal regulations in Handbook PO-101 do preclude taping of meetings by postal officials "so as not to inhibit discussion by participants."  As for citizens recording the meetings, there has been no official policy, and "decisions on whether to allow or prohibit such practices were made on an ad-hoc basis by postal officials conducting community meetings, often with a primary focus (driven by PO-101) of ensuring that customer inhibition was avoided."

The Postal Service has reviewed the issue, however, and decided to adopt "an open door policy allowing attendees to conduct non-disruptive photography and audiovisual recording at community discontinuance meetings."

The new policy, the Postal Service, adds does not "change the need for local personnel to maintain order and preventing disruption of meetings."  The Postal Service also noted that "any deviations from the open door policy should be approved by the Area Vice President in consultation with the Vice President, Delivery and Post Office Operations."

Hopefully more meetings will be taped so that there's a complete public record of what's going on.  Videos will also help with appeals cases, since there have been differences of opinion about exactly what was said at some meetings.

By the way, if you're doing the video, be sure to get good sound.