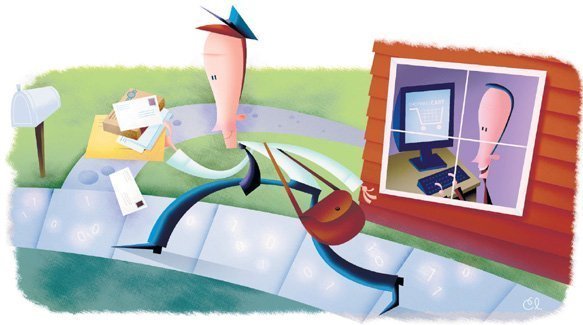 The New York Times finally gets it right — an article that explains how the Internet is not the cause of the Postal Service’s woes.  It’s called “Why the Internet Isn’t the Death of the Post Office,” and it’s written by James Fallows, a highly respected, award-winning author and journalist.  Unfortunately for the Times, Fallows’ article was published on September 4, 2005.  You’ll be hard pressed to find anything in the paper written over the past year that gets anywhere near this close to the truth.

“The eclipse of ‘snail mail’ in the age of instant electronic communication has been predicted at least as often as the coming of the paperless office,” writes Fallows, but the predictions of the death of the mail are just not coming true.   Fallows doesn’t mention it, but here’s an example of the kind of bogus prediction he’s talking about: A 1976 GAO report warned of declining “demand for traditional postal services” due to increases in “electronic funds transfer” and “the use of computer terminals for direct exchange of information.”  We’re talking 1976 — who even had a computer terminal back then?  But it wasn’t too soon for the doomsayers to prophesy the End of the Post Office.

“The harmful side of the Internet’s impact is obvious but statistically less important than many would guess,” writes Fallows.  People are naturally writing fewer letters, he explains, but that started fifty years ago with the telephone, and besides, household-to-household correspondence accounts for less than one percent of first-class mail.

So just because you’re not sending old-fashioned letters very often doesn’t mean the Internet is killing the Post Office.  In many ways, Fallows notes, the Internet is actually helping the Postal Service by contributing to an increase in many types of mail — prescription drugs, eBay items, catalogs, Netflix videos, credit card solicitations, and so on.

Fallows’ article may be dated 2005, but it’s still on the money as far as the Internet Myth is concerned.  Yes, the Internet is growing, and electronic bill paying and email are causing a decline in first-class mail, but overall, the impact of the Internet on the Postal Service revenues is relatively small.  The real reason for the declines of the past four years is obvious — the recession.

A study done earlier this year called “Approximating the Impact of Substitution and the Recession on Postal Volume” addressed the question of impacts and came up with some interesting conclusions.  Robert Cohen and Charles McBride, two independent postal consultants, each with over 35 years in the business, examined the impacts of the recession and “Internet substitution” on various types of mail.  They concluded that standard regular mail was the category hardest hit by the recession — down 25%, from 2007 to 2009 — while single-piece first-class was the category most affected by Internet substitution and least affected by the recession — down about 5% a year over the period 2000 to 2009.  Bulk first-class mail actually grew during 2000 to 2006 and only started to decline in 2007, when the economy started to slow down.  And that’s true of mail volumes overall, which peaked in 2006 – 2007 at about 212 billion pieces a year.

If you look at first-class mail overall for the past ten years, you’ll find this: 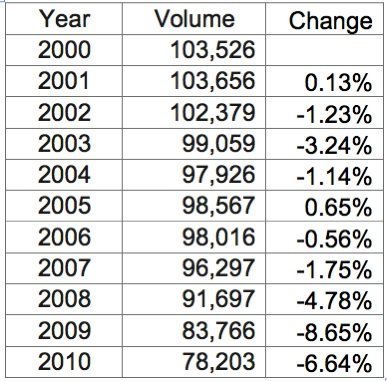 Given that nothing special happened in the world of email and online bill paying in the period 2007 to 2010, it’s likely that the average annual decline of 1% due to electronic divergence continued during this period.  Thus, only about 4% of the 22% decline for 2007 – 2010 should be attributed to the Internet.  The recession can take the credit for the remaining 18%.

But what do we read in this week’s Wall Street Journal?  “The rapid growth of email, online bill paying and the like has reduced the volume of first class mail by 22% since 2006, cutting into the government’s monopoly.  An inexorable decline is underway.”

The 22% figure may be correct, but that’s cherry-picking the data and attributing the wrong cause to the decline.  Now why would the Wall Street Journal want to do something like that?  And why are we seeing this sort of thing all over the media landscape?

Gradual declines due to the Internet just don’t fit into the “crisis narrative” that the Postal Service, business press, conservative think tanks, and corporate stakeholders want to promulgate in order to further their agendas.  Blaming the Internet makes the big declines seem permanent — “unsustainable,” as the Wall Street Journal puts it — and this justifies radical responses, like closing thousands of post offices, laying off 120,000 workers, and — as the Wall Street Journal advocates — “ending the USPS’s dysfunctional first-class mail monopoly, and opening it up to private competition.”  You can’t push for these sorts of changes if the declines are due to the recession because economic downturns are temporary and don’t justify radical transformations — you just wait them out.

These two charts, from a study by the Congressional Research Service, show how much the big declines of the past few years are tied to the recession:

The charts show that volume peaked in 2006 – 2007 — through some classes were going down during the years leading to the peak, others were increasing and more than making up for the declines.  Revenues peaked in 2008 — though volume was starting to go down, a rate increase and shifts in how the revenue was distributed across classes kept overall income up.  The big decline occurred when the recession hit, and the declines slowed down when the economy picked up.  Yet the prophets of doom want to put all of these declines on email and online bill paying.

Even the Postal Service, which can’t be accused of downplaying the idea that there’s a crisis, has attributed the revenue declines mostly to the recession.  In its case for an exigent rate increase last year, it said that two-thirds of the revenue declines were due to the recession, one-third to the Internet.  A few months later, it modified this assessment and suggested that even some of that one-third was also probably due to the recession.  Figured that way, perhaps the Internet is responsible for a fourth or a fifth of the decline.

The Postal Regulatory Commission turned down the request for a rate increase because it saw that most of the decline was tied to the recession, and a temporary, recurring event like an economic downturn did not merit a permanent rate increase.  The PRC suggested that rather than seeking a rate increase, the Postal Service needed to solve the long-term structural problems underlying the postal deficits — the retiree health care pre-funding requirement and the huge overpayments to the retirement funds.

The Internet effect is ultimately very small because very little of the mail is household mail to begin with.  As a very helpful post by Alan Robinson in Courier Express and Postal Observer notes this week, about 97% of the mail involves business, government, or a non-profit.  And it’s been that way for a long time — in 1987, the number was about 95%.  “To the extent that consumers have abandoned mail because they don’t send personal cards and letters,” writes Robinson, “that abandonment happened well over 20 years ago.”  And the cause was probably the telephone, not email.

The typical consumer, in other words, hasn’t used the mail for personal communication very much for a long time.  People may be using phones and email more than ever, and the role of the Internet in our lives may be increasing in very noticeable ways, but all this is not having a dramatically negative impact on the Postal Service.

The postal business is actually doing pretty well for some classes of mail.  This week the Postal Service announced revenue increases in several categories.  Paul Vogel, president and chief Marketing/Sales officer, says that “compared to last year, marketing mail revenue is up 2.1 percent, revenue from shipping services is up 5.4 percent, and international sales have grown by 8 percent.”

But you’re not going to read about business being good in the mainstream media, and Postal Service operations managers are not going to be mentioning that at public hearings about post office closings.  The line will continue to be the same — the Postal Service is losing billions due to the Internet, so post offices must close and the workforce must shrink.

It’s getting to the point where postal workers aren’t even allowed to say in public what’s really going on.  As a recently released letter from one zealous postal manager warned, workers must “remain faithful to the United State Postal Service.”  Resisting efforts to close post offices and telling the truth about the real causes of the financial “crisis” — the recession and overpayments to the pension and retiree health funds — is apparently a form of mutiny.  As the letter states, postal workers must be “re-educated” about “regulations governing conduct.”  What country do we live in?

Speaking of efforts to silence opposition, how about this new addition to the docket on the PRC Advisor Opinion about the closing of 3,650 post offices?  The Chairman of the Postal Regulatory Commission, Ruth Goldway, has just issued an “information request” to the Postal Service asking, “Is it standard Postal Service practice to prohibit audio recordings, video recordings or still photographs from being taken at community meetings?”  Sounds like the PRC has received complaints from the public that the postal operations managers conducting the public hearings about post office closings are trying to stop people from recording the meetings.  Not good.