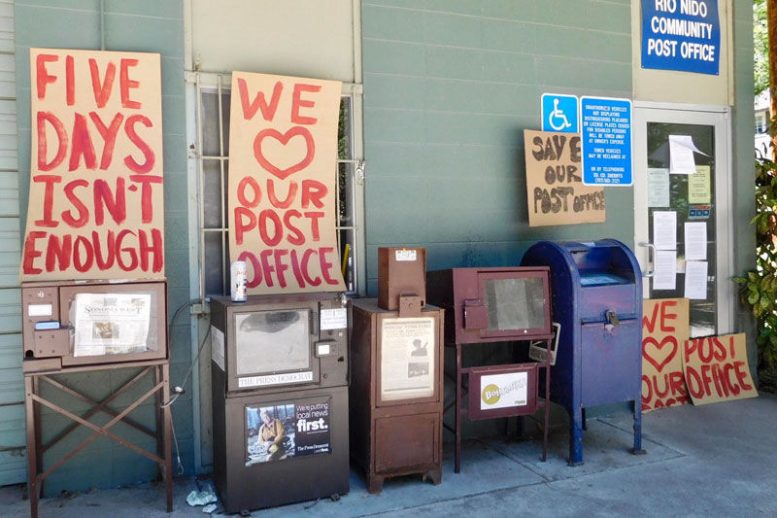 The fight appears over to save the neighborhood post office in Rio Nido, Calif., after U.S. Postal Regulatory Commissioners have deadlocked on closure last June of the century-old post office on Rio Nido Road.

A deadline this week may mark the end of a Rio Nido community appeal of the sudden shutdown when postal officials said the tiny post office was a consistent money-loser, locked the doors and moved operations to Guerneville.

Last month, U.S. Postal Regulatory Commissioners were split in a 2-2 vote over the merits of a neighborhood protest of the closing. The deadlock means Rio Nido loses and the U.S. Postal Service wins in its decision unless Rio Nido residents take some new legal action before a Oct. 27 deadline.

“My clients still have some remedies,” said Occidental attorney Joe Baxter, who filed the protest petition on behalf of the Friends of Rio Nido and the Rio Nido Neighborhood Association. “They’re considering their options.”

The deadlocked postal commission vote indicated support for Rio Nido’s argument that their local post office provided the “sole source of mail delivery” for approximately 1,000 Rio Nido postal customers who don’t get carrier delivery to their residences and instead rely on the local post office to get mail, buy stamps and send letters.

However, postal officials contended that providing home delivery to Rio Nido would be too costly and otherwise problematic owing to Rio Nido’s substandard and flood-prone narrow winding roads.

But two Postal Regulatory Commissioners disagreed, saying the postal service has failed to make a convincing argument why it can’t simply deliver mail to Rio Nido postal customers the same way it serves the rest of the lower Russian River — by having carriers put mail in stand-alone curbside mailboxes or “cluster box units” installed in a convenient neighborhood location.  Read more.