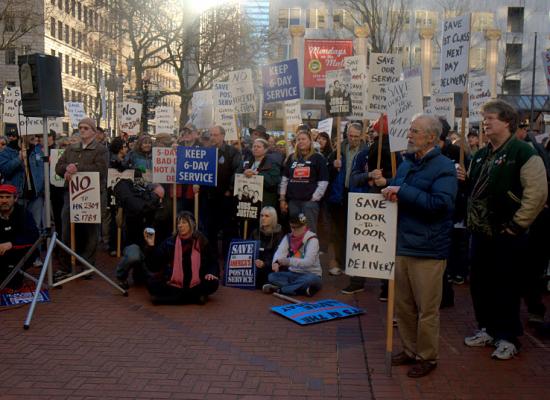 “We called for this rally to build public understanding of the current postal crisis and support for the very viable solutions available.   The entire Oregon Congressional delegation, except Congressman Walden, support rational legislative solutions to save the U.S. Postal Service, such as HR 1351 and S. 1853,” said Jim Cook, President of the National Association of Letter Carriers (NALC) Branch 82, representing about 1,200 USPS city letter carriers in the greater Portland area.

“Oregonians know about the USPS’s financial crisis, but few know what caused the crisis or that there are solutions before Congress that won’t cost the taxpayer a dime.  In fact, by subjecting the USPS – unlike any other agency or company in the country – to a pre-funding obligation starting in 2007, Congress itself has caused the bulk of the red ink.  There also has not been enough information about what’s at stake if the proposed detrimental legislation (HR 2309 / S.1789) is passed.”  said Cook.

Representatives from Working America, the Rural Organizing Project, the Northeast Coalition of Neighborhoods, Portland Workers Rights Board, and the Oregon AFL-CIO encouraged the crowd to fight proposed service and job cuts.  Postal union leaders saluted supportive contingents from the JOBS with JUSTICE coalition and OCCUPY Portland.

(Photos by Jerry Atkin on Picasa; Slideshow made with Slideshow Embed Tool)